Arnold stood back, his chest heaving. “There. That’s it. Finished.” The rising sun cast soft light over his night’s work.

His mother tried to be supportive.  “The individual pieces are beautifully constructed.”

His expectancy made her throat constrict. “It’s just… ”

Her voice was low. “They don’t connect. The gaps… ”

She took a breath. Without meaning to, she dug all four paws into the leaf-strewn bank. “The water runs right through.”

His beautiful large teeth gleamed as he smiled. “Completely. The flow is perfect. Unimpeded. The viewer sees it at once.”

Oh yes, everyone would see it. Birds flying overhead. Fish under the surface, slipping around the odd shadows where there should have been one large solid block and a lovely pond. Their fellow beavers… She would have to avoid her friends for a bit, but what were friends compared to her son?

His breath came fast. “You get it. Don’t you? The commentary on the meaning of our lives? We think we build solidly. We think we’re in control. But actually Life and The Truth slide past our feeble piles of sticks.”

Her eyes moved from one small mound to another. Five little disconnected damlets, none of them doing their job. “I suppose the committee… ”

Arnold rose on his back paws, swaying a moment, the sleek fur on his belly glistening from his last plunge into the stream. “It’s what I promised them, and more. Two clusters more than I’d sketched in my proposal. This will be the making of me. More grants, maybe a fellowship.”

He squinted against the sun and turned to face the stream, his tail thudding lightly on the ground. “Unless the meaning is too obvious…”

She smiled, her heart warming despite herself. Did it truly matter if she understood? Her son was an artist, and this installation meant so much to him.

Did the stream really need just another ordinary dam? 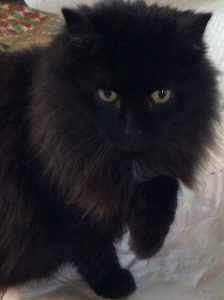 R. C. Capasso has been composing stories since learning to read. R.C. loves animals but has a special affinity for cats and dogs, many of which have shared her life. After a career in education, R.C. devotes time to cooking, writing, travel, and learning languages. Previous stories have appeared in Literally Stories, Bewildering Stories, Long Story Short, and Fiction on the Web.