Griselda made dragons out of words. No one knew how. One moment she’d be hunched over her desk, scribbling furiously, only stopping occasionally to dip her quill or suck on it thoughtfully, her chin lifted and her eyes somewhere else. And the next moment, a blizzard would blast the door and windows open. A beast with icicle wings and a snowdrift tail and eyes like wistful memories of summer would roar into the room, gnashing teeth like sickle blades and thrashing through the walls.

Griselda’s husband Antonio looked on in awe from the door, tendrils of frost in what was not quite a beard, willfully locking his jaw to keep his teeth from chattering. Antonio learned quickly to shut his mouth and simply watch. If he so much as breathed too loudly, Griselda would gasp and startle, and all at once the winterbeast, the storm, and any damage to the walls, floor, and ceiling would vanish like a dream. So her husband kept silent while she wove her dragons, as silent as he could in the presence of such majesty.

Sometimes her dragons set the room aflame, trailing whirls of desert dust and a seductive, unquenchable thirst. These dragons conjured dunes to be climbed, camel hooves baking on hot sand. Sometimes her dragons slithered, wingless, into the room, curled up in her lap, and hummed the song of rain on rooftops. Sometimes her dragons looked like wolves, all fur and sleek angles and muscle, and their shrill cries were the equal opposite of thunder. They made his ears bleed in the best way.

Always, her dragons were beautiful.

One night, as they sat down to their childless supper, to the scarred oaken table, to half-spoiled chicken and hard bread and ale as thin as water, he asked her the question that marked the beginning of the end.

“Why do you show no one your dragons?”

She covered her mouth in shock. “You saw?” she whispered. Her voice rose to a shout, and she glared at him. “You saw?!”

He did not shrink from her.

“You have a gift, Griselda. I think it should be shared with the world.”

She picked up her fork and waved it threateningly in his direction.

“They are my dragons,” she hissed, steam trickling out from between her teeth. “No one else’s.”

Helplessly, he held up his hands. “All right! If you say so.” She simmered down. “But if you ever wanted to share them,” he continued quietly, “I would support you. Completely.”

She sank back into her seat, her brow furrowed and new shadows under her eyes. “I hope you will support me regardless.”

The remainder of their meal passed in silence.

Griselda started locking the door to her study in the evenings when she went upstairs to work. But now and then, when Antonio passed the door, he heard rumblings, claws clacking on wood. Wisps of steam leaked out from the crack beneath the door. It killed him, until one night he could stand it no longer. Using a simple cantrip he had learned from the old wizard in the marketplace, he picked the lock and flung open the door.

He saw nothing unusual. Just his wife, sitting at her desk.

Tears filled her eyes like a looming dragon-storm. When he glanced at the parchment before her, he saw that it was blank.

She shook her head. “There is nothing to forgive.” Rising, she looked into his eyes. “I’ve been thinking about what you said. Perhaps you’re right. Perhaps I should share my dragons.”

Slowly, he crossed the room, taking her hand in his own.

“Are you sure? I hope you aren’t saying this for my sake.”

She smiled, her eyes like wistful memories of summer, and squeezed his hand.

The next day, she started selling dragons at the market. Antonio made her a stall of cheap wood and a wobbly table on which to write. She sat at the makeshift desk as he roved the market, loudly calling to passersby.

“Ho! You there! For a mere two coppers, my wife will make you a dragon! Any kind of dragon you’d like!”

At first, he was met with narrowed eyes and scornful laughs. But then the first customer, a little girl who had lost her parents, requested a dragon. A teal dragon of forest and sea.

And Griselda began to write.

A teal dragon spiraled down from the sky, smelling of salt and fish and pine trees. It crashed into the girl like a wave and licked her face with its catlike tongue.

The crowd gasped and the girl giggled. People flocked to Griselda’s stall. And the old wizard selling simple cantrips was put out of business forever.

Griselda wrote people dragons. Noble dragons. Cute dragons. Deadly dragons. Wise dragons. Dragons of granite and dragons of gold. Dragons of water whose droplets shivered as they moved. Singing dragons and braying dragons. Dragons as large as houses or as small as kittens. A rainbow, a menagerie, an army of dragons. Each disappeared when Griselda put down her quill, leaving her customers begging for more. They quickly ran out of parchment at their little stall, but the stationer down the street gladly gave them reams more in exchange for a dragon of his own.

By the end of the day, Griselda and Antonio had more money than they had ever seen in their lives. More than enough to buy dinner at a fancy restaurant. Antonio laughed merrily over his mead.

“Dear Griselda! You blew them away!”

Griselda smiled wanly in her brand-new satin dress, gazing toward the bard strumming in the corner.

She growled and shook her head, not meeting his eyes.  “Nothing!” she snapped, slamming her fist on the table.

Time stopped for a moment. Then the ambient chatter and music resumed.

She gazed into his eyes. Her eyes were like barren winter boughs.  “They are not my dragons,” she said, so quietly that she could barely hear herself.

Antonio did not hear. “Come again?”

Antonio frowned. “What do you mean, love? They seem more than alive to me!”

She sipped her wine broodingly.  “I give the people what they want. But these dragons are chained. They do not see it. You do not see it. But I do.” Her eyes shone wetly in the candlelight. “My dragons are wild. They appear for me whenever and however they choose. I do not try to control them. If I did, they would abandon me.”

Picking up her fork, she impassively prodded her charbroiled steak.  “Those creatures I made in the market came on command. They are crass and inelegant. Simpering shadows.” She stabbed the meat violently. “They are not dragons. They are whipped nags.”

Antonio watched her lift the forkful of steak, then put it back down on her plate, untouched.

“I’m sorry you feel that way. We don’t have to do it again. We’ll go home tomorrow.”

But that night he sighed contentedly in their palatial hotel room after they made love in a bed fit for royalty. And he turned under the silken sheets and closed his eyes with a happier smile on his face than she had ever seen there. Long after he fell asleep, Griselda stared wide-eyed at the expensive unicorn tapestries on the walls, replaying memories of the day in her mind. His enjoyment of the mead, the meal, the luxurious bedroom, the fine new clothes. She decided then and there to keep chasing shadows.

The next morning, the crowd preceded them to their stall. Griselda continued to write her dragons on demand. Minor flaws in their patterns started to emerge: a torn wing, a missing claw, half a face dissolved into thin air. But the delighted customers hardly noticed. Nor did Antonio.

But then trumpets sounded, and hooves rang across the cobbles, and the crowd parted to let the king himself through the square, with much marching and banner-waving and bugling, pipes and whinnies and drums. Four of the king’s servants set his palanquin down in front of Griselda’s stall, bowed, and stepped back.

The king rose and stood before Griselda. Not a person breathed in the square.

Griselda slowly bowed, as did Antonio beside her.

“Mrs. Feathersbane, every soul in the kingdom has been gossiping about your power.” The king examined Griselda’s rickety stall. “Naturally, I had to come see it for myself.”

The king’s face was serious, his tone formal.  “I order you to make me a dragon encrusted with rubies, sapphires, and emeralds that glint as brightly as the sun, blinding all those unworthy to look upon him. A proud symbol of the wealth and prosperity of our nation.”

“I’m not finished.” The king narrowed his eyes. His entourage of servants, soldiers, and performers quivered behind him. “The dragon will be taller than the spires of my castle. His teeth will be as long and as sharp as my sword. He will melt armies with his breath, and he will not disappear. And he will answer to me and me alone.”

The king studied Griselda. “Can you do this?”

Griselda looked into the king’s eyes for a long time, afraid of his gaze but more afraid to look away.  “Yes, Your Majesty.”

The crowd murmured. Antonio patted her arm. “You can do this,” he whispered in her ear. He stepped back as she sat down before her parchment. The square fell silent.

Taking a deep breath, she began to write.

At first, no sound emerged but the scritch of her quill on the parchment. No monster spiraled out of the sky.

But then there was a faint, wheezing cough. Then a thousand shrieks and frightened, stumbling footsteps. Griselda stopped writing and looked up. She stared.

An inky, vaguely dragon-shaped creature staggered through the screaming, fleeing crowd toward the king, coughing raspingly. Its legs were stumps. There were just indents where its eyes should have been. Phlegm dribbled from its mouth. Its ribs poked through its sides. It was the size of a dog, and it could not fly.

The king cried out and backed away from the creature, which kept shuffling towards him like a desperate, dying thing. Rasping, coughing, keening.

At last, in a flash of darkness, it was gone.

Rising from her chair, Griselda tore her parchment in two and walked away.

No one knew where Griselda went. After a futile attempt to pacify king and crowd, Antonio raced back to the hotel to find her gone. No note, no information from the man at the front desk. But the earnings from the market were missing. And so was Griselda’s rumpled old dress.

Folks said that Griselda, fearing the wrath of the king, had used her profits to purchase the fastest horse money could buy, a steed with a splash of unicorn blood in its veins. They said she fled to the country, where she changed her name and eked out an existence on some crumbling farm. They said she never spoke another word, too frightened of the monsters that might crawl from her mouth.

Only Griselda knows the truth. That she rented a room of her own in a rundown inn on a dead-end street. That she went upstairs to that room, locked the door, sat down at the dusty desk with a stick of charcoal and a scrap of paper.

And then, alone, she flew. 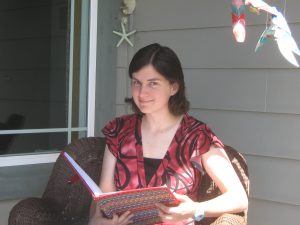 Amy Clare Fontaine is a wildlife biologist who’s chased wolves in Yellowstone, hyenas in Kenya, and fishers in the northern Sierras. She is the author of anthropomorphic hyena novelette Beyond Acacia Ridge and young adult fantasy novel Mist, as well as numerous short stories and poems. Her interactive novel Fox Spirit: A Two-Tailed Adventure has just been released by Choice of Games. You can find her published works and WordPress blog at www.amyclarefontaine.com and follow her on Twitter at @fontainepen.

1 thought on “The Dragon Maker”