The sun bathed the river with its glow.  The water glinted back in merriment, flirting and winking to all that it encountered.  Time slowed and breathed, it meditated and did not hurry the hours away, but flowed onward as the river itself.  The reeds bent in the lilting breeze, murmuring sweet conversations and delicious secrets to their companions.  The larks sang intricate melodies, their joyous hearts shaping the lyrics.  The lavender air refreshed the spirit and was moderate in its mood.

The brown ferret, a furry poet, lay back on the dory and dragged his paw in the clear, reflecting water.  He had been writing since he had learned how to write and had formulated some ideas on how the process worked, how to bridge the immense gulf between thought and communication, and how to avoid falling into an abyss.  His sharp face held inquisitive, good-natured eyes, a pointed, wet nose, and a mouth turned upwards at its corners. Small dimples dotted the plumpness of his cheeks whenever he smiled, which was often.

“Inspiration,” he said, “it is here all around us.”  He licked the end of his pencil stub and drew spiralling doodles on his notepad.  His stubby tail curled slowly from one side to the other.

His fat companion, the marmot, more dreamer than writer, nodded in agreement.

Ferret continued.  “Have you ever seen such a pleasant afternoon?  Such an afternoon is perfect for writing.  The warm air, the relaxing breeze, the sunlight itself puts me in a creative mood.”

Ferret’s doodles took the shape of a cupcake with a cloud of icing and a cherry at its peak, one that he looked forward to having at his tea.  He twirled his whiskers and batted away a curious dragonfly, its iridescent wings shining green and gold.

The marmot again nodded, though more from nodding off in the afternoon sun than in agreement.  His chin rested on his ample belly and his breathing whistled a little between his teeth.

“I say, Marmot,” said Ferret.  “Are you listening to anything I’ve just said?  This is important if you want to become a writer.”

“What, what?” said Marmot, sputtering a little, startled but trying not look like he had been caught off-guard.  His ears perked upwards and he struggled to focus his eyes, although they were naturally a little crossed.

Marmot blinked twice then yawned, stretching his arms out.  His stomach gurgled.  “Can we talk about this after we’ve had our tea?  I can’t concentrate on an empty stomach.”  He straightened his waistcoat which, judging from its tightness, could not have guessed that his stomach was ever empty, and patted the carved wooden buttons.

“Well,” Ferret began, a reluctant note in his voice.  “I wanted to start on the outline of a story.  The one I was telling you about earlier about the tulips and nightingale and—–”

Marmot’s gurgling stomach interrupted him.  His eyes glazed and drifted, as though he were thinking of steak pies on parade.

“Alright,” conceded Ferret.  “Though after tea, I really must put some work in.”

“Of course,” said Marmot, now fully awake and ready to agree to anything.  He seized the oars and steered the dory towards the river bank.  He docked the boat and with a surprising nimbleness for one his size, jumped from the boat onto the land.   The boat rocked dangerously.  Ferret gripped the sides of the dory and shifted his weight to avoid tipping over.

“Hold on there,” said Ferret.  “Watch what you are doing!”

Marmot was oblivious to anything but his stomach.  “Do you think that I’ve brought enough food?  I would hate for us to be hungry.”  He leaned over into the boat, gripped the handles of the picnic basket and, using the strength of his legs to push his weight backwards, hauled the basket onto the shore.  The picnic basket, a large brown wicker almost the size of Marmot himself, was packed full.

“Oh!” said Marmot, landing on his rump.  He rubbed his hands together and his eyes twinkled.  With reverence and heightened anticipation, Marmot opened the lid.  He took a moment to feast his eyes on the delicacies held within while a dreamy smile alit his face.  He pulled out a red and white checked tablecloth and unfolded it.  He settled himself onto its middle.  He stuck his head into the basket.

“Shall we start with the savouries or the sweets?” said Marmot, nose so deep in the basket it were as if the basket had grown two legs and a tail.  “For savouries, we have bread with lots of butter, small steak and kidney pies, pickles, smoked salmon, sharp cheddar, and stuffed olives.  For sweets, there are apricot, blueberry, and strawberry preserves, cherry cupcakes, melon cubes, rose-water infused macaroons, orange scones with heavy cream and petit fours.”

Marmot took out each of the dishes from the basket.  Ferret stepped out of the boat and sat on the edge of the blanket since after the food was laid out, there was not much room remaining.  Out came the ivory bone china, the crystal flutes with twisting, delicate stems, the silver-plated utensils with vine scrolls on the handles, along with the beverages, the sparkling rose wine, the fresh peach juice and pink lemonade.

“So many delicious things, I don’t know where to start,” said Ferret, eyes overlooking the meal.  A robin tilted its head at him and hopped a few steps, as if to help him to decide.

“Hmmm,” said Marmot, mouth already full of jam and bread.  They tucked in, each having a little bit of everything, then repeating in case that they had missed anything.  They ate in companionable silence.  They could not have wanted anything more in life but the good food in front of them, in the company of a good friend, and the simple pleasure of a sunny afternoon.

After they had finished eating, Marmot poured sweetened tea from a large, battered thermos into the delicate china.  Ferret sighed and stretched out onto the blanket.

“I must get some work done. Let me go over my notes.”  Ferret ruffled though the leaves of his notepad, dismayed upon finding doodles of cherry-topped cupcakes, strawberries, purple-stemmed Symphyotrichum puniceum, and a crooked-looking weather vane.  He yawned.

Marmot looked up from his tea and sniffed the air.  “Rain’s coming.  Tomorrow smells like it will bring a thunderstorm.”

“Good,” said Ferret, decisively.  “Rainy weather is perfect for writing.  No other distractions.”

With that, he put down his notepad, turned over onto his stomach, and closed his eyes for a nap. 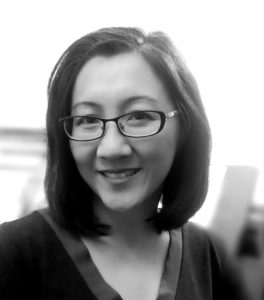 Lena Ng dwells in Toronto, Ontario. She tiptoes at night so no one knows she’s awake. She has short stories in four dozen publications including Amazing Stories, from Australia, Canada, the United States, and the United Kingdom. “Under an Autumn Moon” is her short story collection. She is currently seeking a publisher for her novel, Darkness Beckons, a Gothic romance.