You know you’re in trouble when you have dinos on your doorstep.  Not just because they’re extinct.  They’re also clawed, scary, and they make you regret messing with that time machine, because introducing anomalies in your own time stream never ends well.

“Carson Wheeler?” said the feathered Deinonychous at my door.  Her voice was raspy and came out of her throat instead of her mouth. She wore what looked like a police uniform, though I didn’t know the language or writing on her badge.  She had a lot of teeth in a head shaped like a football with one end split open, with a feathered crest at the other end, and large amber eyes in the middle.  Her bare back feet had one upraised scimitar claw on each, sharp and capable of disemboweling squishy beings like humans.

She poked me in the chest with a long, curved claw.  “Are you Carson Wheeler or aren’t you?”

She poked me twice more, hard enough to bruise, but she didn’t stick a claw in me to see if I was done.

“How is that a maybe question?” she said.

A smaller dinosaur peeked out from behind her.  It had been under her outstretched, feather-edged tail, which was as long as I was tall.  The tail looked like it could whip over and knock me off my feet.  Admittedly not much of a challenge.

The little one looked like a smaller version of the big one.  It was about the size of a Thanksgiving turkey for a family of ten, and it wasn’t wearing clothes.  Wing-feathers edged its upper arms and stubby tail, and it had a little crest.  I wondered if it was the big one’s baby.  Maybe in Dino culture they did that sort of thing, take your dino daughter to work?

“Carson Wheeler,” it croaked, in a deep voice like rusty gears engaging.

“What can I do you for?” I asked, cleverly still not admitting who I was.

“You can change,” said Deinonychus.

“You brought us here,” said the little Velociraptor.  “Fix it.”

“Either change everyone else into dinosaurs, or change us into something else,” said Big D.  “Something people would expect to see.”

“I don’t think I can do that,” I said.  “What if I could just send you back where you came from?”  I wasn’t sure I could even manage that.  The machine had just showed up in the basement right next to my gaming console.  Naturally I fiddled with it, even mapped out some of its capabilities.  It had jumped me ten seconds into the past, and ten seconds into the future, which was weird, because the first time, there were two of me in the basement, and the second time, I went away and didn’t exist, but I came back.  There were buttons I hadn’t touched yet.  I was taking it slow.  I thought.

Baby V came forward and clamped his jaws around my right calf.  The teeth pressed into the denim of my jeans.  “What if I bit off your lower leg?” he asked.

How could he even talk with his mouth full?

“Yeah, no, that wouldn’t be good,” I said.  Had Mom left any meat in the fridge?  Maybe I could decoy them with hot dogs?

Little V unhinged his jaw and released my leg, but I could see him eyeing it.  He had tasted denim and he wanted more.

I stood back and held the door open.  “How did you find me?  What makes you think I had anything to do with this?”

Big D shoved past me into the house, leaving a stench like the inside of a mouth when the teeth hadn’t been brushed in two days, and Little V followed her, slapping me in the crotch with his wing arm.  Mega ouch!  I hunched over with my hands over my crotch and waited for the hot, pulsing pain to pass.  It took a while.  I had my eyes tight shut, and tears ran down my cheeks.

“Didn’t know it would do that,” said Little V.

When I could open my eyes again, I stared at their bare dino feet on my mom’s pale blue shag carpet.  They had those sticking-up claws instead of big toes, and only two other toes besides.  With scary black claws on all three toes.

I pulled myself up straight and swiped the tears off my face, feeling embarrassed and angry.  Look on the bright side:  had to be glad Little V hadn’t clawed me, anyway.

“Are you at capacity again?” asked Big D.  She twisted her head and looked at me with one golden eye, then the other.

“But you can show us the machine.”

I edged around them, watching Little V’s wing-arms.  He kept them still, though a little purring growl rolled in his throat.  I got past them into the living room.  “This way.  Try not to knock anything over,” I said, and that was probably a mistake, too.  Why was I giving them ideas?

But they picked through the living room without destroying anything, and followed me through the kitchen and down the basement stairs.

To where I lived most of my life when not compelled to go outside by things like school.  Mom had let me move down into the basement last year, so I could practice guitar without driving my older sister Kayla buggy, and play my games on the big gaming computer in the rec room.  It was dark down there, and that was how I liked it.

Yeah, I should probably wash the couch cover and change my bedsheets.  But nobody else came down here anymore since I moved into the rec room and Dad got a 42-inch TV in the living room.  I cracked a window.

“There it is.”  I pointed to the new machine that had arrived late last night while I was kind of dozing with my headphones on and the controller in my hand.  One minute I was shooting other soldiers in ruins and sneaking around, and then, well, there were probably a few blank minutes, because I woke up dead, and noticed this stack of three pale egg-shaped nodules with glowing buttons scattered here and there on them.  I peeled out of my game gear and went over to look at it.  Some faint writing near the buttons that looked like a Star Trek alphabet, not anything I’d seen on Earth.  I took some phone pics of it and sent them to my game buddy, Frank.  He thought I had built it out of eggs and wouldn’t take it seriously.

This morning, when I got up off the couch where I had crashed, I pressed one of the glowing blue spots.  And then the doorbell rang.

Come to think…what would Frank think about dinos in my house?  I pulled out the phone and aimed it at them to snap some pics.

Little V jumped up, grabbed it in his three-fingered hand, and bit down on it.  It crunched, and he spat out pieces of glass.   “Awfg!  That’s the worst tasting food bar I ever ate!”  He went ahead and swallowed it, though.

My phone!  What was I going to do without my phone?

Big D went to the new machine and sniffed it all over, loud breaths sucked in through her nostrils.  “You touched it here?” she asked, pointing a claw toward the button I’d pushed.

She tapped it with a clawtip.

The world crushed in on me.  I felt like I was being whomped by a potato masher from all directions at once.  The pain was so excruciating I just — let go, falling down into darkness.

When I opened my eyes again, everything looked different.  My nose pushed out in front of my eyes, and it looked more like a dog’s muzzle than a nose.

The light was too bright, the edges too sharp.  I had to blink a bunch to realize I was staring at the ceiling of my basement room, which was basically gray with a lot of cobwebs stenciled across it, thicker in the corners.  They looked like lace now.

And cowabunga, did everything smell different!  Scents were flooding into my nose as if pouring in through two funnels, and it wasn’t pleasant.  My tennis shoes in the corner reeked.  The clothes scattered across the easy chairs and even the ones I’d managed to get in the laundry hamper, which I used as a basketball hoop, stank.  On the other hand,  the pizza crusts I’d left under the table two days ago smelled like fresh bread and ripe tomatoes, and I was hungry.

I sat up and noticed, yeah, where were my arms and hands?  I waved my arms, and stubby wings waved instead.  My big toe claw had torn right out of my tennis shoes, and my clothes were stretched and torn, hanging off my feathered body in rags.

I tried to stand up, and then big muscles near my butt activated my new tail.  My clothes pretty much fell off me, which would have embarrassed me if I weren’t covered with feathers.  I swished my tail a couple of times and found my balance.

The other dinosaurs had a musty, earthy smell.   Big D looked…smelled…like something I wanted, in a gush of hormonal rage.  I lurched toward her and she laughed and fended me off with a wing-arm.  “Not so fast, Junior.  Let’s see if everything’s fixed first.”  She headed back up the stairs, Little V trailing after, and me learning how weird it was to walk up the stairs with three-toed feet when one of the toes never touched the ground.

Big D went right through the living room and out the front door, and we followed her.

Mrs. Holiday — maybe — stood across the street, watering her vegetable garden with a hose.  I mean, she wore the kind of flowery sun dress Mrs. Holiday wore in real life and in my fantasies, only she wasn’t a teenage boy’s dream neighbor anymore.

Her little wing-arms flapped and she tossed the hose away from her and let out an ear-splitting shriek.

“Well, that went well,” said Big D.  I lifted my snout.  Somewhere nearby somebody was cooking sausage.

I headed out in search. 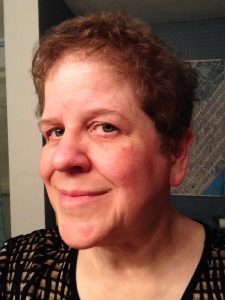 Over the past thirty-odd years, Nina Kiriki Hoffman has sold adult and young adult novels and more than 300 short stories.  Her works have been finalists for many major awards, and she has won a Stoker and a Nebula Award.

Nina’s novels have been published by Avon, Atheneum, Ace, Pocket, Scholastic, Tachyon, and Viking.  Her short stories have appeared in many magazines and anthologies.

Nina does production work for The Magazine of Fantasy & Science Fiction and teaches writing.  She lives in Eugene, Oregon.  For a list of Nina’s publications: http://ofearna.us/books/hoffman.html.

2 thoughts on “Dinos on Your Doorstep”