Cepha’s mother Octavia was harvesting algae when she got caught in a net made by humans. It dragged the octopus upward and out of the ocean. Underneath, a school of smelt watched. The youngest fish, Osme broke away from her siblings and rushed to report the sad news. Cepha was heartbroken. She puffed out a cloud of black ink in sorrow.

As news of Octavia’s death spread, many fish visited Cepha’s home as if it were a museum. Cepha showed them her mother’s office. The ceiling was made of pink coral and the walls were coated with yellow sea moss. Inside were piles of crystalline sand and jars of brown algae-glue. She explained how her mother used a swordfish blade to remove rotten fish fins caused by human garbage. And how she developed a three-tentacle sewing technique to attach replacements. Cepha always finished by saying that the new fins were as flexible and as strong as the originals.

After a while there were no more visitors. Cepha had no one to talk to. She spent her days listlessly inside watching the current. Crustaceans, starfish, and fish drifted by. She had planned on following in her mother’s tentacles, but she was too sad to try.

One bright morning Osme flipped her tail against Cepha’s coral gate. Cepha came out to greet her. Osme had grown and her belly was fat with eggs. There were several male smelt lurking around. Cepha opened the gate and locked it behind her.

“I’m scared,” said Osme, as she darted into the sandy courtyard.

“Are they following you?” asked Cepha. Osme’s fins looked strong, but her eyes were glazed over, and her scales had lost their shimmer.

“They say they will escort me out of the ocean to a clear river where we can hatch eggs together.” Cepha and Osme both knew that smelt females died after egg lay. Gingerly, Cepha wrapped a tentacle around Osme’s swollen belly. Her skin was so tight that a long red mark was forming under her gill. No wonder her friend was frightened.

They came up with a plan. Cepha swam into her mother’s office and Osme followed. Cepha fetched the swordfish blade from the coral shelf. She reached out her tentacles for a spool of kelp thread, algae glue and a sea sponge.

“Are you sure?” she asked the smelt.

Cepha used the blade to make a small incision in Osme’s belly. Gently, she pushed out the eggs. They floated away. Then she cleaned the area, applied algae glue and stitched it together with three tentacles the same way her mother had done. The procedure only took a few minutes.

“Not one bit,” Osme replied, her eyes brightened. They shared some delicious seaweed chips. When Osme left, the male smelt were gone.

Word got around on the reef. Many female smelt came to Cepha’s for help. They gave her shell ornaments and sea fruit in appreciation.

One evening Osme brought a big school of smelt to visit. They were a mix of males and females, some with a small scar from Cepha’s work. Delicate bubbles floated from their giggling voices. They told her that there was a new octopus living beyond the reef. He was a surgeon like Cepha and her mother. They said he’d set up shop in the blue area, deeper down.

Cepha decided to visit the new octopus right away. She swam out of her den and descended along the ocean floor. The sand was larger here than in her neighborhood. It wasn’t long before she saw a house made of staghorn coral. Its pillars were an elegant ivory attached to a pile of grey boulders. The big octopus squeezed out to greet her.

“Nice to meet you,” replied Cepha. Topus was the first octopus she’d seen since her mother died. She couldn’t stop staring. His black stripes were handsome, and his eyes were the color of sea grass. She flushed. Hopefully he didn’t notice. Topus told her about his cure for shellfish bleaching. The two octopi talked all night.

As Cepha prepared to go home, Topus presented her with a bracelet made from gold pearls. “I want you to have this. It was my grandmother’s.” He wrapped the bracelet around her front left tentacle. Topus’ suction cups sent a pleasing sensation into both of her hearts. Cepha wanted to touch his velvety skin. But instead she pulled away.

Respectfully, Topus withdrew his tentacles and folded them underneath. His stripes dimmed.

“I will and thank you,” she replied.

The golden pearls on her left front tentacle sparkled the whole way home. 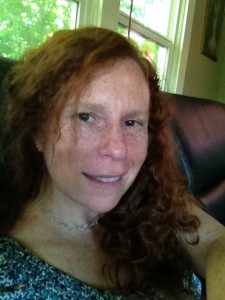 Eliza Master began writing with crayons stored in an old cookie tin. Since then, many magazines have published her stories. Eliza’s three novellas, The Scarlet Cord, The Twisted Rope, and The Shibari Knot are soon to be released.  She attempts to make each day better than the previous one. When Eliza isn’t writing you can find her amongst brightly colored clay pots dreaming of her next adventure.