The finless must go down. Those are the words. The Agent mutters them to herself as she wades through the murk, reaches the door, knocks and waits. She repeats them, aloud this time, when the rock slides open. A young one, shimmerwhite with brilliant pink wings.

“Indeed they must,” he says, nodding at her badge. “You’re with the census?”

He stands up straighter, backs away from the threshold. “I live alone. You’re free to have a look around. Anything you need.”

She glances past his shoulder into the mudcave. It is small, well-adorned with shell and bone, the home of a young professional. And a true believer, by the look in his eyes. The type who’d love nothing more than to contribute to ridding the world of deviants and blasphemers. She nods. “No, that won’t be necessary. Enjoy your afternoon.”

Back through the mud to the next residence. Her twentieth today. The census never stops, not when the finless move around as they do. The next home is rocky and crusted with mussels. She slaps the door until it rolls aside to a nervous greeting. An old puckerscale with sad eyes and a tremor.

“The finless must go down.”

“How many have you got, uncle?”

His answer is all shivers. He glances down. “Only me.”

She lengthens her fingers, stretching her webs. “Would you mind showing me inside?”

Panic oozes from his nod. She glides in, scans the foyer, takes a deep breath. She can smell others already. She follows the stench to a crevice of hushed voices, concealed behind a leafy curtain. Three of them. Adolescents. Two with ruby red neckwings, healthy and breathing. Both clutching the third, a girl with pallid skin whose neck is all stumps. All of them frightened.

Everyone protests at once. “It isn’t how it looks.” “Please, have a heart.” “You can’t take her, you monster.” “We don’t know her, she just showed up here.”

Only the girl is quiet.

Reluctant glances, a twitch, and then—”Dry.”

The Agent pulls Dry into the hall. The nubs on either side of her neck are still wrapped, swollen red around tight bindings that would have cut off circulation to the precious appendages. Freshly sloughed, by the looks of them. She would start to change before long.

The old man stands between them and the entrance. “Please,” he starts to say. “Don’t take her. She’s only done what she thinks is right.”

The Agent fingers the spear at her waist. She could arrest him as well, for lying and abetting and harboring. She is practically required to. She brushes past him into the murk.

It’s slow going. With her arms cuffed, Dry can only manage by squelching along the clayfloor. It’s a bad weatherday, foggy with silt. Forecast says no clearness until the weekend. They catch no eyes as they amble toward the Department. There it is, now, a hazy outline of sunken rotwood, the ruins of a great tree, pocked with tunnels. A security duo float outside the main swimthru, armed and watchful. The Agent pauses at the gurgle of Dry’s voice.

“Yes. We all know. You’ll shut me in a room in the dark until I beg to get out. Until I am nearly done changing and can hardly breathe. Then you’ll wait longer. You’ll ask me questions. Who recruited me, where the others are. You’ll hurt me when I answer but hurt me worse when I refuse. Then you will weight my legs and send me over the dropoff, as far down as down goes, where I will drown alone in the dark.”

The Agent glances at the Department and then at Dry.

Dry stomps the clay. “Why lie? We know the law and we know we break it. We accept the risks and the consequences. Alone we may be hunted, broken, made examples of, but together as one we are solid stone. We’re not afraid of you. We keep breathing.”

She can tell by the way Dry’s eyes dart around, by the way her tail shivers, that she is in fact deeply afraid, her fear seeping through layers of righteous anger.

“I would imagine not.”

“But if we don’t change we will die anyway. All of us. The lake is shrinking, the water goes to the sun and wisps away. Everyone can see it, yet no one speaks of it. There is no future for us down here, only doom.”

“And you think you’ll be safer above?”

Dry’s response chokes in her throat.

The Agent takes a deep gulp. To reject the mud, forsake the congress of one’s own birth, to mutilate oneself into a metamorphosis that should be lost to time, all for a fleeting chance of a better life above. To die for a suicidal cause. Stupidity and courage, those longtime lovers.

She grabs Dry by the cuffs and starts toward the Department. Past security scowls, into the swimthru, round the sludgepainted halls to the stocks. She can feel Dry’s heart race faster the deeper they go. They reach an open cell at the end of the hall, its walls coated in menacing black slime, barely wide enough to imagine Dry fitting into. The Agent peels back the rock opening.

Dry panics. All the composure and indignation vanishes when she sees the darkness and she tries to suck free, strains to wrest the cuffs from the Agent’s grasp. The Agent holds her steady, wrangles her into the crevice, ignores her gasps of protest and the sobs that leak out after. She slides the seal back into place.

With an inch left to go, she bubbles out a whisper. “Listen close. In the farback under your toes, a stone will come loose. If it doesn’t, pull harder. Beyond you will find a very slim tunnel, so slim only the finless can use it. Scrape all the way through and you will arrive many pools to the east. From there, seek above.”

Dry begins to balk, to question, to disbelieve. They always do. But there’s no time to explain. The Agent rolls the stone shut. One whisper must suffice. “Keep breathing, sister.”

She has a good feeling about this one, though she can never be sure if anyone makes it. Possibly no one has. But it’s an effort worth making, if anything is. She may not be brave enough to change herself, but the finless are right: the lake is leaving them. The Department’s suicidal adherence to tradition will change nothing. They must learn to live above or die forever.

She returns out of the prison labyrinth to the main swimthru. Back out to the census. She hopes she can find the next one before her colleagues do. She isn’t sure she can bear to watch another sinking.

The security duo wait at the exit. A chill in the mud. They are facing her, fins wide with agitation.

A splash behind her. More guards. Spears at her neck. Cuffs at her wrists. A blow to her head. Darkness.

She thrashes in the dark, helpless in her bonds. A voice asks for names.

A searing, serrated pain at her neck.

“You accept full responsibility for every escape since you became a census-taker?”

“You worked with no one?”

“I see. What were their names?”

More pain, so much she can no longer speak. The stench of blood fills the muck.

“What? You wanted to help them so badly. Why not be one of them?”

When she wakes, she is standing on a ledge. At her sides, mud turns to smoke, mixing and dissipating into something blue and infinite and very, very cold. She looks down and sees two heavy rocks strapped tight to her feet, and below them, a steep drop into abyss. She looks behind her and sees the entire congress gathered—her colleagues, the guards, the young man and the old uncle with his grandkids. All watching her. Some laughing, some scowling, some with furtive glances of what might be solidarity or nothing at all. The pain on her neck is unbearable; the sensation of trying to move limbs that no longer exist is worse.

It is difficult to breathe. She twitches her neck in a panic, but only a trifle of breath tickles her insides. Her change is already beginning. She feels a strange, desperate need to get out of the mud, to go upward and outward, to suck air into her mouth and taste the outside and all the life it may bring. She can’t move.

She wonders if Dry made it. Supposedly a community of finless has established inland from the lake. If Dry found them, she might be all right. A new world of wind and sun, a world of untold dangers, but a world fighting for hope instead of against it. Hadn’t that been why she helped them escape? For hope? Was there even such a thing? Yes, yes, of course, she tells herself. Always, even in the darkest days of a vanishing world, there is hope.

But none for her.

Something presses on her back.

The voice from the dungeon calls to the crowd: “The finless must go down!” 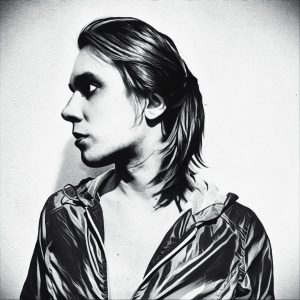 Karter Mycroft is a writer, editor, musician, and fisheries scientist who lives in Los Angeles. They write on the beach by asking the dead fish for ideas. Their short fiction has appeared in The Colored Lens, Coppice & Brake, Lovecraftiana, and elsewhere. You can find them on Twitter @kartermycroft.