The T-Rex stared down at the duckbill he’d just killed. He was sorry for the harm he had caused it, but what choice did he have? He took the first chomp out of it — but it only made him more ravenous. Sometimes at night he’d stare up at the stars and wonder what monster had created this evil predator-eat-prey system. But it was eat or die.

The duckbill was large enough to feed him for two days. Good. Tomorrow he would hunt down another duckbill, and then let it go free, cheating destiny and fate. He longed to play with the duckbills, but while he didn’t mind playing with his — and he snorted in disgust — food, the food had other ideas, despite his tiny arm-waving assurances. He’d even tried joining them in grazing, but the plants they ate were the worst thing he’d ever tasted and gave him a stomachache that lasted a week.

Loneliness. There were other T-Rexes, but they were brutes, interested only in killing, eating, and killing. If the other T-Rex was larger, it would attack him; if it were smaller, it would run away. Sometimes he’d play with a rather dense Ankylosaur he’d adopted, playfully shoving at its shell while dodging its clubbed tail. But that got rather old, and he wasn’t sure if the Ankylosaur enjoyed the game.

The hunger pangs returned two days later, meaning death to another duckbill or some other wretched creature. Damn the system. Maybe he’d have a fight-to-the-death with a Triceratops — that always brought a thrill, followed by guilt.

The hunger drove him to hunt again. He plodded silently through the forest, sniffing the air, scanning the forest for movement, and listening intently for low-frequency sounds of distant prey on the move. His mottled brown feathers camouflaged him from prey right up until the final lunge. He was a pure hunting machine, and both proud and embarrassed by this. He sometimes watched the ripples from his passage in nearby puddles and wondered what others felt like knowing he was nearby. It must be terrifying.

He caught the scent of a group of furries, but knew they were small and underground, and not worth digging out. He saw a colorful, winged insect in his path. He carefully stepped over it, not wanting to destroy its beauty.

A small tunnel beneath his feet collapsed. A dozen furries scattered in different directions on their four legs, whistling cries of distress. He dropped a clawed foot over one of them, caging the poor, tiny, squeaking creature. Then he lowered his massive head for a better look at the convenient snack. Poor thing. The creature fought valiantly but with utter futility against the unyielding foot of the T-Rex. He could easily crush it but hesitated as he watched the creature struggle.

It finally tired and stopped struggling. It stared up at him, breathing far too rapidly and shaking with fright. Fine fur covered its body, brown with a white belly, with a long, quivering snout and even longer, skinny tail. Its eyes were huge, shaped like giant teardrops. They looked up at him from between his giant toes, and there was something there, a spark he rarely saw in others. Other T-Rexes had that spark, but they were angry ones that glittered warnings. He could see the intelligence in this furry’s frightened eyes.

How could something so small and so defenseless survive? Even its tunnel wouldn’t protect it from a determined predator, which could tear it apart in seconds. And yet, somehow these creatures survived, the underfoot of the world.

Slowly the creature’s breathing slowed and the shaking stopped. It leaned back on its haunches, freeing its front legs — with tiny hands — as it stared up at the T-Rex, wiggling its whiskered snout, perhaps resigned to its fate. What fate would that be? It had to be smart, to survive with so little. Maybe there were dumb ones, not smart enough to survive. If only the smartest survived, perhaps they would keep getting smarter. Where would it end?

There was a sudden symphony of squeaks, and he felt something sharp and vaguely painful in his legs. A pack of the little creatures were attacking him, biting him with their tiny teeth. He watched, bemused. What must it be like to be so small and weak?

Then he felt a much stronger jab in his free foot. One of the furries was attacking him with… a stick! It jabbed the pointed object into his foot over and over and it actually hurt. He gently kicked the creature away, perhaps too hard as it went flying through the air, dropping the stick. The other furries continued biting him, but he ignored them. The T-Rex stooped down and examined the object. It was like teeth for those without large ones. He’d never seen a creature use an object like that. This one must be smarter than the others of their kind. Perhaps they had a future, or at least the ones related to that one.

But teeth last forever while a wooden stick would snap with a tap of his claws and then rot away. He could probably kill or daze all of them with a yank of his foot, sending them flying, and then pop them into his mouth, one by one. But such bravery and devotion!

The trapped one still stared at him with its intelligent eyes. He’d have to find other prey. He raised his foot. But the creature continued to stare at him for a moment before it finally stepped free. The others stopped their attack, also staring at him. Then they all scampered off.

Late that night the T-Rex stared up at the stars and moon, wondering what they were. What kept them in the sky? What caused their light? Why did they go away during the day, replaced by the fiery sun? These were things he could experience but never solve, and maybe that was more important.

But often he just watched the little creatures that no longer avoided him, keeping him company as their small ones played on his gently swooshing tail. And they, down on the ground, were of course no threat to him, no more so than the stars in the sky. 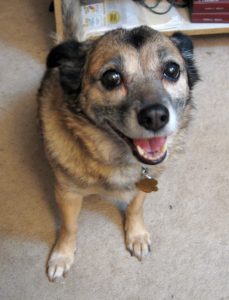 Larry Hodges is an active member of Science Fiction Writers of America with over 110 short story sales and four novels, including Campaign 2100: Game of Scorpions, which covers the election for President of Earth in the year 2100, and When Parallel Lines Meet, which he co-wrote with Mike Resnick and Lezli Robyn. He’s a member of Codexwriters, and a graduate of the six-week 2006 Odyssey Writers Workshop and the two-week 2008 Taos Toolbox Writers Workshop, and has a bachelor’s in math and a master’s in journalism. In the world of non-fiction, he has 17 books and over 1900 published articles in over 160 different publications. He’s also a professional table tennis coach and claims to be the best science fiction writer in USA Table Tennis, and the best table tennis player in Science Fiction Writers of America! Visit him at larryhodges.com.