Everywhere. They say that passion flares like fire, but this flavor of pain tastes more like drowning: choking on a pressure so deep it might crush me. I feel like your teeth are gnawing my bones. Like my heart has been ripped out by the same claws that held me.

I miss your long tongue on my neck, your fangs in my flesh. The way your tail wagged when I came home from work, as if you were happy to see me.

They say a werewolf’s bite hurts like hell, but they don’t know. The worst wounds werewolves give you are the ones nobody sees.

In your navy-blue sweater, as I cuddle it in bed. It’s been two months now, but it still smells like a stray dog that just stepped out of the rain. A cur come to rest by the hearth for a spell, until her fur has dried and her paws start itching to run again. A mutt growling softly, legs twitching, eyes closed: chasing phantom quarry through her dreams.

I should have known you were going to leave me. Sit? Stay? Play dead? No. You weren’t my dog, weren’t some Good Girl trading tricks for treats. You could never bear to be the sidekick in someone else’s story. You wore no collar; you were free to come and go. The few burdens you carried, you left behind, fading gently like pawprints in snow.

The sweater has holes and tears and stains. I always mean to take it to the thrift store, but never do.

In Central Park on a full moon night, the sidewalks littered with silver, the autumn leaves blowing about like discarded dreams. They crinkle like the pages of long-forgotten books. I wander, restless, prowling, alone. Searching for a path to silence the echoes of your eyes.

I hunt for an answer until my lungs burn and ache. Then, panting, I plop down on a bench beside an old man in a trench coat. He smells like the dog pound, but in a nice way. A way that feels warm and familiar.

His stare bores into me as I gaze up at the moon. I know what color his eyes are without even looking.

“You’re thinking of her, aren’tcha, lass?”

He chuckles. “I know that look, that voiceless howl at the moon. You fell for a wolf queen, and she wandered away.” The burning coals of his eyes dim somewhat. “Yessir, I know that look too well.”

My blood freezes over. I watch him light a cigarette and blow his smoke into the void. For the first time in a long while, my heart pangs with someone else’s pain.

“I’m sorry,” I murmur, hanging my head. My year of grief seems petty next to his lifetime of loss.

He smiles sagely, breathing the hurt into his soul.

“It was many moons ago, my lassie.” He casts me a wink. “Asides, I learned a trick to help me cope.”

My lungs catch with a flicker of hope. I can barely breathe. “You did?”

“Aye.” He points up at the moon. “That bonnie orb there makes you think of her, dunnit.”

He grins, takes another puff. “Ain’t that the way it always be. Lost lovers gazing up at that moon, always a’pinin’ for their long-lost loves.”

He shakes his head. Stamping out the last stub of his cigarette, he fixes me with that carnivore’s gaze.

“But ya see, lass, it ain’t gotta be her moon anymore. It’s yours now. You make it your own.” He leans forward, gripping my shoulders. “Ya see?”

His wizened hands clamp down on me with surprising strength, like canid jaws clenching a chew toy. He stinks of tobacco and elk meat and fur. For a moment, I wonder if I ought to be afraid.

“Haha!” He squeals a wordless triumph, letting go of me and slapping his knee. “That’s the ticket, lass!” He grins broadly, revealing pointed teeth at last.

Those teeth sink deep into my hand.

The old man’s voice rings through my memory as I let loose my first joyous howl.

It’s your moon now, lass. Make it your own.

In the back of my mind, simmering like the soup I made on the night you left. I expected you to open the door, inhale the air with that sharp nose of yours, and lick your muzzle, your yellow eyes glinting. I pictured you sauntering up to the stove, making that old joke about how I was a lucky little pig, and you were a lucky wolf for not getting boiled alive. Sweeping me into your shaggy arms and kissing me so hard I could almost howl. Us ignoring the soup for a good long time, while we sated our sorrows on better prey.

It wasn’t to be. You never came back. I ate soup by myself, gazing out the window at the moon.

But it’s my moon now. And I’m learning to let go.

You never gave me this gift. You said you were afraid for my safety, my sanity. You didn’t want to condemn me to your curse. I begged and pleaded, but you never did it. Never bit down long and hard enough to let the magic sink in.

Now I know you were afraid for yourself. Afraid of not being the special one. Afraid of allowing me to trust myself, to follow my instincts and sing my own songs.

Sometimes, I almost catch your scent on the breeze. Sometimes, my pointed ears perk to the wail of the wind. Sometimes, I picture my paws thudding through this whole crazy city and leading me straight back into your arms.

Only sometimes. Not always. And not everywhere. 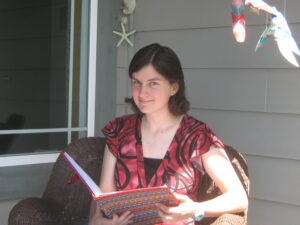 Amy Clare Fontaine is a wandering wildlife biologist and a wildly imaginative furry writer. Over the course of her adventures, she has recorded wolf howls in Yellowstone National Park, observed hyena behavior in the Maasai Mara, and listened to rock hyrax songs in Ein Gedi Natural Reserve. Fox Spirit: A Two-Tailed Adventure, her interactive fantasy novel from Choice of Games, won the Leo Literary Award for Novels in 2020. She is currently writing another interactive novel for Choice of Games which lets you play as a unicorn/pegasus/kelpie hybrid with magical powers. Her short fiction has been featured in Daily Science Fiction, Cosmic Roots and Eldritch Shores, and the ROAR anthology series from Bad Dog Books. She hopes to instill in her readers a sense of wonder and a new awareness of the wildness within themselves. You can find more of her work, including novels, short stories, poems, games, and research, at amyclarefontaine.com.

2 thoughts on “Where Does It Hurt?”