Deep in the 100 mm petri dish, WaterBear and Moss Piglet played. Light signaled the arrival of Crystal Robin. She had so many fun toys. “What do you think she’ll do to us today?” asked Piglet. He was a very timid tardigrade.

“Maybe she’ll put us on the Merry-go-Round. We’ll get dizzy.”

“No, I don’t think I’d like that.” The last time Crystal had centrifuged them he’d been a tun for weeks. “I’m still trying to get back to my full size.”

Piglet said, “I hope we are always friends.”

WaterBear said, “We are tardigrades, we will always be something. But being friends is best.”

Crystal was looking at the x-rays from yesterday. “I can see inside your tummy,” said Piglet, giggling.

“Is it very Rumbly?” asked WaterBear.

“Oh bother, that must be left over from the last time she smeared us on a slide. I very much wish it were something sweet. Do you happen to have any trehalose in you, perhaps?” WaterBear leaned over and wiggled the hairy ridges which covered his snout.

Piglet hopped sideways. “I’ll need it if she freezes us again.”

Crystal talked to them while she fed them their lichens and moss and freshened their water. Her favorite stories were about Outer Space. “I bet you guys will be the best astronauts ever. There’s nothing you can’t survive, so far anyway.” Crystal created more games, fire and ice and pressure so nice. She always told the tardigrades what she was doing but the words were long and often muffled by the sound of lichens being chomped. Once, Crystal aerosolized them. WaterBear and Piglet, floating in the ether, waving eight stubby legs at each other. “Look I’m a Roll-y-Poley,” said Piglet, rolling into a perfect ball.

WaterBear tried it too, but he was a tubby tardigrade and no matter how much he clenched his paws and scrunched his snout to his bottom he couldn’t transform from long into round. He floated with eight claws extended, sailing his body like a kite, riding the waves between particles. When the experiment ended, and he was back in the 100mm petri dish, he felt positively withered, and didn’t shuffle or wiggle when Crystal shared the results. “You did so well, my little menagerie. I wish I could boop your cute snoots.”

“Did you hear that? She thinks we’re cute,” said Piglet.

Piglet twiddled his front claws. “Do you want some of my trehalose?”

“No thank you. You’ll need it for the Big spearmint.”

“Wh-what are you talking about?”

“To the stars.” WaterBear pointed a claw upwards.

“I don’t want to, WaterBear. Here have my trehalose. I’ll stay here where its snuggly and moss and lichens are always close to my mouth.”

“Well, I won’t eat it all, but maybe just a taste?” When he finished, WaterBear hopped and scooted and wiggled until he was puffed out like a tardigrade again. Piglet had gone over to the edge, where the medium thickened, watching Crystal Robin’s assistants pack up the laboratory. WaterBear put a paw on Piglet’s back, to modulate the shock of the news to his moss piglet buddy. “All of us are going to Outer Space.”

“Even Crystal? But how will we get the lichens?” WaterBear tried to answer but Piglet scurried, creating trails through the media. “Maybe we can spell out a message? ‘S-o-m-e-t-a-r-d-i-g-r-a-d-e-s!'”

“She already knows we are here.” WaterBear put the three paws to his head. “Think of something else. Think. Think.”

But it was too late. Hands clamped a cover on the plate and they jostled and gently sloshed as they settled into a new dark world. Crystal had packed them in foam and the last thing they heard was someone saying, “Rocket Park.”

“I will hold your paw, and whatever comes we will be brave together,” said WaterBear.

Once the 100mm dish was secured to a conduit on the Flange of the rocket, Crystal opened the lid and snuck a few snacks For the Ride. WaterBear tried to pay attention but he was sleepy from the nanoparticles Crystal’s team had spent all week injecting into the tardigrades to track them. They waited a long time for liftoff, Piglet twiddling his claws in between bites of moss and WaterBear taking one last traipse through the 100mm petri dish. Finally, the vibrations signaled the time to leave their Earthly home had come. “Stay by me,” said WaterBear, and they intertwined four sets of claws as the darkness and cold replaced warmth and light. The Flange shook and the conduit opened, and WaterBear and Piglet, media, food and all the other tardigrades floated into the Abyss.

Like reverse popcorn, the tardigrades turned into tuns, but WaterBear, who was even rounder in the middle now, couldn’t make his front claws meet the back ones. “Think, think,” he said, and Piglet, whose voice was muffled by his body, said “What’s wrong, WaterBear?”

“Tardigrades don’t have tails, not even you.”

“Oh, well then, that’s a relief.” He was drying out fast, but still couldn’t form a ball. Then some space lichen smacked into him and his body reacted as it should. He was a tun, and Piglet floated next to him.

“Where are we going?” asked Piglet.

“I don’t know but at least we’ll be together.” 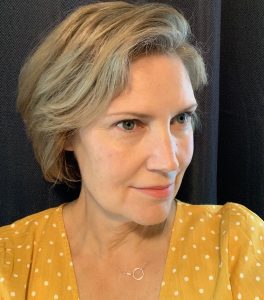 Sandy Parsons writes literary, philosophical, humorous, and speculative fiction. She has studied physics, math, molecular biophysics, and medical science, but only ponders the fundamental nature of reality for fun these days. When not writing, Sandy is an anesthetist and an associate editor at http://escapepod.org/. More information and a list of publications can be found at https://www.sandyparsons.com/
Comments

5 thoughts on “The Adventures of WaterBear and Moss Piglet”