Anita sank into the driver’s seat and slit the envelope with the sharp edge of her hoof. Inside was the mug of a unicorn, his eyes like red rubies. His profile said that he’d strung his wife from a tree branch and smashed her head in with a broomstick. Then he’d blindfolded the neighborhood kids and told them to do the same to his two baby ponies.  All because she’d blabbed about his work for the cartel, smuggling chocolates and hard candies in his gut across the border. Now he was worth $650,000, dead or alive.

Anita lit up the end of her churro and breathed deep. Her boss was always nagging her to quit, said she was gonna go up in flames. Too bad that she itched for the feel of warm smoke flushing from her nostrils, sugar crusting her lips, the smell of burnt cinnamon.

She tapped the churro on the windowsill and stroked the side of her skull. A brown scar jumped out amongst the pinks and blues of her coat.  The wound had been so deep that hair refused to grow back over it.  She rubbed harder, picked at its roughness, but felt nothing.

She took another drag, then drew the fiery tip closer and closer to her scar. The tissue paper of her mane curled from the heat. Did she dare?

“Not until I off that bastard.” She stamped the churro’s fiery tip between the unicorn’s eyes. It charred a hole in his horn.

She chucked the churro into the street and revved the engine.  As she jerked into the road, her broom teetered from the passenger seat and smacked her on the shoulder.  Its straw tickled her nose; she smelled sour pops and licorice, fruit chews and fudge caramels. She crushed the file, his picture, under her hoof.

“Chocolates and hard candies. I’ll spill it all.” 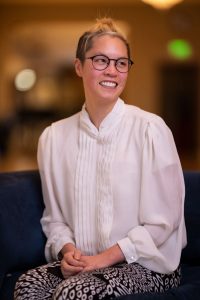 L.D. Nguyen lives inside of comic books but frequently emerges from this 2-D universe to write short fiction and creative nonfiction. Her work has appeared in Broken Pencil, Curve, Vine Leaves, and others. She lives in the Bay Area, California with her cat.