The river sloshes about my legs, and the mud sucks at my paws, but I run as fast as I can through the In-Between, my tail swishing a happy rhythm behind me. Time to see him again! No more waiting!

I know I’m getting closer when the wrong portals start to yawn and sigh. One promises baby mice to sniff out, another rabbits to chase through sun-warmed grasses. Tricky, tricky. I snort and toss my head. Some might forget their duty and change their path, but not me. I don’t even slow down.

Then: old wool, cedar, and soap.

His portal blinks at me like a sleepy eye. Whining, I dig and wiggle and— pop out into a darkened room.

Despite the heat, the windows are closed, and a blanket is smoothed over his chest. Two ski poles balance on the bed’s railing. A wheelchair in the corner holds his sneakers and tomato soup-stained trousers. Hearing aids buzz on the nightstand next to a mug of flat soda.

I trot over to the bed and nose at the blanket until I find his hand, then give him a little nip.

“Seymour?” He sits up — pure essence now, but still shaped in his old form, like an echo — and looks at me, then back at his remains.

I expect him to swing his legs over the edge of the bed and stand, but he doesn’t. He tries to touch his hand. My tail droops. I wait.

“This is it,” he says. “Suppose I should be grateful it didn’t feel like falling.”

An itch crawls across my skin, making my fur stand up. In the far corner, a portal cracks open. He doesn’t know it’s there.

“I’ve worked hard.” His eyes scan the room, as if taking inventory, then stare through the wall, towards his office. “Seems wrong to leave so much unfinished.”

Frost rims the portal. It promises mountains lined with trees, crisp air, powdery snow, and a cabin where people gather around a fire, sharing cider.

I wish he had a nose like mine. It would make his choice easier.

“You don’t belong here anymore, but there are other worlds. Want to come with me?”

“Hard to believe this is real.” He reaches over slowly, rubs my ears, smiles. “I can feel you.”

“Makes sense.” Keeping his hand on my head, he slides off the bed, and stands. “You’ll stay with me?”

I remember the river, and how I chose him. Next time, I will, too. “Always.” 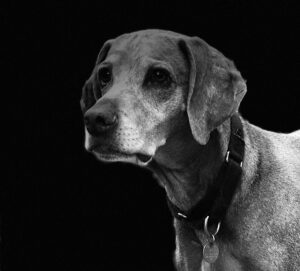 Kristen Hornung lives in Encinitas, California. When not parenting or working, Kristen loves to take long walks and get lost in stories. Kristen has been published in Psychological Perspectives and with Havok Publishing online.

7 thoughts on “The Reunion”