“If you do this,” said the insect, “then you’ll regret it.” Her voice had a stentorian quality to it that belied its feeble pitch.

“Oh, I doubt that,” said the cheetah. He brought the meerschaum bowl of the pipe closer to his face. “You have no power over me. You may be a goddess to your people, but to mine, you’re nothing but a fancy ant.” With his other paw, he pushed his teashades up the bridge of his muzzle.

The ant squirmed against the resin that coated the bottom of the bowl. Her legs remained stuck fast. She flicked her wings, but they were no help.

“That’s not what I mean,” she said. “You think the spiritual potencies you’ll gain from consuming me will help you. They won’t.”

“Hmm,” said the cat. He turned the pipe around in his paws, examining the ant-goddess from all angles. As he did, he lay back on the silk couch behind him, his tail flicking out from under his red satin robes. “They won’t?” he asked. “There are an awful lot of people waiting past those curtains and down the hall in the auditorium who might think otherwise. They’ll be growing impatient soon. They came here to listen to a story. You are – were – a goddess of storytelling.”

“So you think that if you reduce me to smoke, and inhale me-”

“I know for a fact.” The cheetah smiled a wide, fang-filled smile. “I’ve done it before. There are thousands of storyteller-deities like you, for all the thousands of insect cultures. For a being of my talent, resources, and determination, it is easy to find you and to capture you. As I have done several times in the past and will do again in the future. So I know from experience that as long as your essence is in my throat, I can create, recall, and recite stories more enthralling and inventive than any mortal could hope to concoct. I’ve built my career on it, in fact.”

As he spoke, the cheetah groped absently for a filigreed firelighter that sat on the table beside him. He placed it in his lap, then turned to a drawer in the table and began rooting around in it for the next item he needed.

“You are mistaken,” said the ant. “My ‘essences’ will do no such thing. You tell only the stories you could have told unaided.”

“Not likely,” said the cheetah, lazily. He retrieved a small bag of shredded leaves, which he dumped over the head of the ant.

“All you’ll accomplish,” said the ant, “will be to create a build-up of deific-grade prana within your lungs. Eventually, they will refuse to breathe earthly air. You will suffocate yourself – or else live out the rest of your days confined to some minor place of holiness, wheezing and sputtering and questing for those spiritual vapors that might linger, untainted, in the corners of your chapel or shrine. A sad end to a promising storyteller.”

A big, black thumb-pad thrust its way into the space beside the ant as the cheetah packed the bowl with the tobacco leaves. He made sure not to injure his captive, but the leaves still pressed uncomfortably against her.

“Please,” said the ant, her tone urgent but bitter. “I have done nothing to you. You will gain nothing. You will only hurt yourself.”

“They all say that,” said the cheetah. He dumped another layer of shredded tobacco over her head. “But I have a performance to put on and a reputation to think of.”

She churned her wings to clear space for her head. “So you’re a fraud,” she said. “Not a true storyteller. You cheat. Is that what you’re content to be?”

He paused, holding the bag of tobacco over her head, ready to pour the third and final layer. “The story of me,” he said. “Or of what you think I am. Why should I listen to it?”

“I could tell that story,” said the ant. “If you heard the whole thing, you would feel guilt and horror. You would not do what you are now doing. You would see the truth.”

The cheetah snorted. “That’s not really your decision to make,” he said. He filled the rest of the bowl with the tobacco, then began pressing it down around and over her head using his thumb-claw as a tamper. The goddess’s compound eyes staring up at him were the last part of her he saw.

He flicked the wheel on his firelighter, hesitated a moment, then lit the pipe. 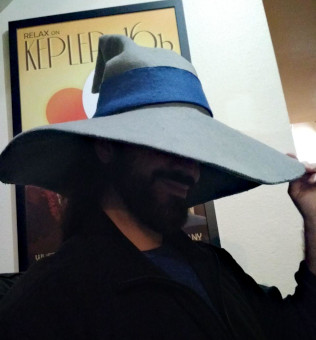 Dylan Craine is an aspiring wizard who lives in someone’s attic in Colorado with his three pets, all imaginary. He enjoys traveling beyond the limits of human ken, trading riddles with dragons, and reading. Every once in a galactic year, he can be spotted posting to his Twitter @dpwatrcreations or to his blog at www.deepwatercreations.com. His other work has appeared in Worlds Without Master.