The ground was frozen. Permafrost settled deep in its bones, where the veiny sinew of tundra grass roots pushed through frosted earth. And snow. Snow dusted the landscape from horizon to horizon. White flakes of snow fell from the sky and swirled in the air.

There was nothing but snow. And a fox on his way home.

Crossing the icy ridge above Grave’s Bay, Shadowbox was just a speck of white fur against a white background. Only his black nose and his pink tongue, like a single rosebud floating in a milk bath, gave him up for a fox.

“Wait! Please, stranger?” came a crystalline voice on the cold ridge. Shadowbox had been keeping a steady pace. He was headed home. His burrow, soft and warm and hidden and safe, called out to him.

But so did the voice. He hesitated on the ridge, hazel eyes alert. It was a human voice—a woman—who approached him, climbing up the ridge from the bay below. She moved carefully, likely afraid that she would spook him. She raised her hands up, showing she had no weapon. No metal, no gunpowder, no snare. She pulled back her hood, revealing her face.

Shadowbox had never been good at guessing human ages. The younger ones were faster and laughed as they grabbed at his hind legs, trying to catch him in the snow. The older ones were wiser and better at setting traps.

This one was somewhere in between. Her long, black braids were streaked throughout with white strands.

“Do you know me, fox?” she asked, slowing her steps. She looked at Shadowbox with haunted eyes.

He looked at her. He smelled her. He could smell smoke, cinder, salt and fish. She must live down in the village in Grave’s Bay. Though it wasn’t really a village anymore, was it? All the cottages were cold, empty and falling into ruin. No one had lived there in a long time.

Except this one. Why would she be here?

She was shaking her head, sadly. The flecks in her brown eyes sparkled like snowflakes in the frost-bit air around them, but she didn’t let herself cry. Shadowbox thought this was wise. Tears froze fast in the tundra.

“You don’t know me,” she answered for him. She sank to her knees, visibly defeated. Her gaze moved over the tundra, distantly, as she mused, perhaps to Shadowbox, perhaps to herself. “I thought…my little brother was always such a chatterbox, always asking me questions. Annika, why’s the sky blue? Annika, why’s the snow white? Mama used to say he wore her out, but she wasn’t the one answering his questions. And I never minded. When the plague came to the Bay, it cut our parents down with the rest. Caleb and I had to go south, they said…”

She pulled one glove from her hand before reaching down and digging into the crusty snow. Soon, her fingers turned red, raw and cold.

She continued, “The priestess said we’d never make it. Not two children wandering in the snow drifts alone. And none of the adults could go with us—too many were sick. So she gave me wings, and she gave Caleb soft fur. We’d cross the tundra with claws, talons and teeth that weren’t our own. She told us that we would turn back into ourselves as soon as our feet touched summer soil. Then she wished us luck and hurried back to the village, to help soothe the groans of the dying. I flew into the air and Caleb followed below, padding along, but I…I lost my brother in a blizzard.”

Shadowbox sat on his haunches, listening, staring at the sad woman. She stared back, balanced on her knees. Every black strand of the woman’s hair was now covered white with snow. If Shadowbox could speak, he would be tempted to ask: Why’re you telling me this, Annika?

“I thought he might have been you…” she muttered, clenching a fistful of snow in her hand until it melted. Her icy fingers were shaking as she laid the hand back in her lap. She bowed her head and said no more. She was weary, broken and sad. Shadowbox could tell—she hadn’t returned to a warm, safe burrow in a long, long time.

He felt sorry for her. Do foxes have feelings, Annika? He didn’t know. But it felt like he might. Impulsively, he crossed the distance between them. With his wet, warm tongue, he licked the ice off her bare hand.

He heard her breath catch. And when she looked down at him, he watched her smile through frosty tears. 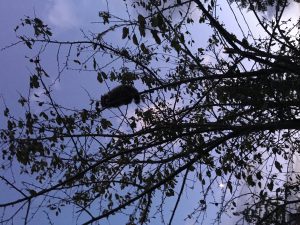 Gretchen Tessmer is a writer based in the U.S./Canadian borderlands. She writes both short fiction and poetry, with work appearing in Nature, Daily Science Fiction, Strange Horizons and F&SF, among other venues. She lives in the woods, with two energetic dogs, some chickens, a couple ducks and a tortoiseshell cat who won’t leave the blue jays alone. Plus about a thousand raccoons. Seriously, she’s overrun. Like Parks & Rec style.