An unnatural flash of lightning cast Baroch’s silhouette across the prairie dirt. He waited, power trembling within him until the disc of the sun touched the horizon.

His power unfurled, racing over rows of green corn and taking the wind with it.

The weight of his years bent his shoulders into a slump. Was a time he could have cast a dozen summoning spells and hoed a field after, but those were distant memories.

A storm gathered in the distance, the clouds beneath it dancing and curling, pulled one direction by a cold front and another by an old sorcerer’s seeking spell.

A fleck moved between the clouds and the plains. Dark and distant, he couldn’t quite track it through a rain squall, but when the shape resolved into flapping wings, Baroch sighed with relief. She had still been able to hear him.

The bird came in fast, wings beating as if it were running from something. Baroch stood up straighter, sucked in his gut a little. A great golden eagle, big as a man, landed before him.

The bird cocked its head.

It scratched at the dirt, acting more chicken than eagle, and for a moment Baroch feared she didn’t recognize him.

But then the feathers twisted and receded. The bird squawked with something like pain, and the squawk turned into a cry. The shape of a woman emerged. Frail and naked, her skin as wrinkled and aged as his own. She looked at him, confused. Then she collapsed.

Baroch rushed to catch her, but he wasn’t as spry as he used to be, and they ended up in a pile of limbs splayed upon the ground.

“Oh, Baroch, it hurts,” Valerie said. The pain, he knew, was not from the tumble. The disease took more out of her every year, even slowed as it was when she was transformed.

“I’m sorry. You didn’t have to come.” He clambered to his feet and offered her first a hand up, then her favorite dress.

“I felt the pull, but I didn’t know why. Not until I saw you.” She threw her arms around him, the dress smashed between them.

She weighed nothing, as if she were more memory than person. The smell of her, though. Oh, that lilac and lavender, the same as the day they met. How it survived the transformations, he didn’t know, but he loved it.

She squeezed him tighter.

Behind him stood a cabin as worn by age as he was. A rickety porch circled it, and two rocking chairs sat beneath the awning. Baroch helped her to one of the rockers—dusted that morning—and settled a blanket over her legs. He poured her a glass of sweet tea from a condensation-covered pitcher.

The ice cubes rattled as she drank.

An hour a year, they had reckoned. Enough time to remember who she was, but not enough for the sickness to finish its work. Neither of them had counted on the natural effects of aging, of declining memories. Losing her while still having her scared him more than anything.

“I have found a spell,” he said. “From Sorcerer Ogdee. Looks to me like it’d slow things down and let you keep your form. Give us a few more years together, as we are.”

She sat in the rocker. Silence stretched between them. Used to be a time he could practically read her mind. They had taken turns finishing each other’s sentences. These days he could barely keep his own thoughts in order, never mind predicting anyone else’s.

She looked up at him. He might have expected hope in her gaze, but all he found was a bone-deep exhaustion. “It won’t work,” she said.

“It might.” He poured himself a glass and settled onto the rocker next to her. “We could try it. I’ve been practicing.”

She took his hand, kissed it. Her lips were like dry paper. “Maybe next year. Give you more time to practice.”

If there is a next year, she didn’t need to say. Each time she came back, there was less of her. Less of him, too.

“I worry,” she said. “Not that you’d fail, but that you would succeed. This body hurts something fierce, and I’m not sure how long I could bear it.”

He took her hand again and held it. Felt the beat of her pulse in her fingertips. Felt the rattle of her breaths. He couldn’t feel the cells warring within her, but they surely were.

The minutes slipped past like trout in a spring stream.

He helped her up from the rocker, took her in his arms a final time. She clung to him, and with each beat of her heart seemed to shrink into herself. He helped her out of the dress, but he couldn’t bear to watch as her hair turned to feathers. He looked away, eyes screwed shut, until the flapping of wings receded into the distance.

Summer again, and the air was as fetid as a scum-covered pond. Baroch stood on the edge of a summoning circle, arms raised and sweat plastering his coveralls to his back. The wind whipped up something furious around him.

It whistled away, taking the wind with it. There weren’t no thunderstorm this year, just a blue sky turning red in the west.

Baroch wiped the sweat off his brow with a damp handkerchief. The only thing moving on the horizon was the sun.

The waiting came natural, after all these years.

After a good fifteen, twenty minutes, she appeared on the horizon. She wandered a bit, tacking left and right, as if she weren’t sure of her course.

She landed, scratched at the dirt. Then she stood there. Blinking, head cocked.

Another blink, slow and confused.

“I can’t change you back. You have to do it yourself, hon.”

He kicked at the circle in the dirt, breaking what little power was left in the summoning spell. His heart like to broke with it.

Valerie—he knew that was her in there—flapped her wings, but she didn’t lift up off the ground. The wings moved up and down. The feathers faded. Pale, liver-spotted arms emerged. The rest of her took shape, and she stumbled forward.

He caught her, but she pulled away.

He offered her dress to her. She had always taken it before, but not this time.

“Well, I’ll just leave it here and go on up to the porch.” He set the dress on the grass and shuffled back up to the house.

When he settled into his rocker, she had put on the dress, but it was backwards.

She approached slowly and stopped at the stairs. It wasn’t fear in her face. More like uncertainty. Confusion.

“If you don’t want to sit up here, that’s okay.” He dragged her rocking chair down from the porch and positioned it in the yard in the shade.

He could try the transformation spell. All the components were ready. String and charcoal and cloves. He had practiced the words a hundred times. Knew them backwards and forwards, rising and falling.

And if he succeeded, then what? She’d live with the pain all the time and not just for an hour per year? They would have how long together? A few months?

She sat on the porch, sipping her tea, and for an instant the years fell away. He saw the girl he had kissed as a teenager and the woman she had become. Saw the sadness when they received the diagnosis, the resolution when the plan for holding it at bay had formed. Her plan, not his. She was always the real wizard in the family. And he was losing her, one missing year at a time.

A new plan formed, giving him a measure of hope. In the old days, she would have never approved, but now? Better to do it and get it over with.

He shuffled out into the yard and drew a wide circle with a stick. Valerie watched from the shade. He laid out the string and the charcoal, but he left the cloves in his pocket. He added a golden feather and a single gray hair.

He said the words with conviction and with practiced ease. As he chanted, Valerie transformed. The pain fled her eyes as the feathers re-covered her head. She flew up from the steps, banking in the thermals radiating from the roof.

Baroch let the spell sweep over him and through him. It wasn’t as complex as he had planned, but it didn’t need to be, not for a one-way trip.

His arms shrank, turned thin as bird’s wings. He flapped and rose, awkward at first.

She was already distant, but he could see her with new clarity. Such power, such grace. He flew forward, following the golden hue of her feathers, following the smudge of light left by the setting sun, following the scent of lilac and lavender. 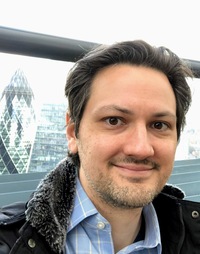 Originally from the tree-swept hills of the Missouri Ozarks, Brent lives in London with his wife, two daughters, and terrifying guard cat. He is a firm believer in airplanes, air conditioning, and good food with good friends. If you find him without his hands on a keyboard or his nose in a book, it will probably be in the kitchen. His short fiction has previously appeared in Fireside Fiction, Flash Fiction Online, and Flame Tree Press, among others.

You can find him online at https://www.dbbaldwin.com and on Twitter as @dbrentbaldwin

2 thoughts on “Hope, Unrequested and Freely Given”