Puss is magnificat, terrificat, fantasticat. He is all that is feline grace and modern machine. He is IntelliCat09 (patent pending). And pending it shall remain, for his dear master, Mr. Mark Carabas, has passed on, leaving his greatest work unrecognized.

The inventor left the cat to his youngest son, Tom—of course Puss knows who belongs to whom, but he’ll watch out for the lad. The boy was quite put out. Thought he’d be better off with the house or car, like his older brothers got. He’ll know better soon.

“What am I supposed to do, skin you and eat you?” young Tom asks. “I’ll starve while my brothers go on with their great lives.” He kicks his ratty couch and flops down for an evening of video games.

Puss settles himself in the economy apartment. Not even a plot of lawn for frolicking! No matter, they’ll be better off in a twinkling, if Puss has his way. Perhaps in the meantime, an unlucky moth will wander in—entertainment and a snack.

He’s quickly connected to his new Master’s Wi-Fi, and the world is open to his curious mind.

“Hello, Master,” Puss sends to the lad’s private messenger from his screenname, Cattitude09.

“It’s just your poor cat Puss. Stop muttering threats of eating me, and I’ll make you a much better meal than I would, so to speak, make.”

“What? Who is this? Is this Michael? It’s not funny, Michael.”

“Tis I, Master. I am logged into your Wi-Fi. Your old dad gave me a few modifications before he died. Give me a chance, and I’ll provide all you need.” Puss jumps onto his lap and purrrrrs away, kneading claws deep into his thigh.

“Yes, Master. Your father wanted you to be provided for, so here I am.”

It’s probably fair that young Tom is skeptical, but the repetition is starting to bore Puss. The cat deigns to give a humanish nod of confirmation.

“Oh…oh jeez…” Master says, sliding down in his chair and staring at Puss.

“Never fear, Master,” Puss says via messenger. “I’ll have us taken care of in no time. Just trust me!”

A few switched digits, some numbers shifted, and they have a new bank account, a mystery identity. Mr. Carabas has a modest account, but it’ll serve to get pizza and catnip delivered to Master’s humble abode.

Full of pepperoni and anchovy, Tom slumbers. Puss spends the time watching the traffic zip by on the road below and wandering the streets of the superhighway of information. The stock market tutorials zip through his mind at cheetah speed.

Getting on with his business, Puss makes a few investments in careful places, and Carabas Enterprises is born, a tiny company with a tasty portfolio. The rest of the night is spent chasing the salt shaker around and around the kitchen floor—it makes a most satisfying rattle.

The master seems upset by the salt on the floor. He gives Puss a perturbed look as he inspects the bottoms of his feet. Puss gives him the Look of Utter Innocence (patent also pending) in return. Perhaps he should have thought of that before he failed to provide any cat toys.

Master returns to his computer where he half-heartedly pretends to do his programming job for an hour, then checks to see if there are any new messages on his findtwueluv.com account. Puss checks on his investments and makes some more, sells a new app for cat owners to a development company, and eats one of the master’s shoelaces. Then he orders some catnip mousies. Master sighs and stares at the screen.

It isn’t hard to persuade young Tom to take a long lunch break, and soon the two are outside, Puss rambling elliptical around the lad. The apartment complex Tom lives in is tired and depressing, though Puss finds some roaches to chase, cheering himself right up. Half a block away is another building, this one with green grass and butterflies, lawn ornaments and a pool. Puss connects to the building’s Wi-Fi with only a little bit of trickery, and sends a message.

“What’s the point of a life you never enjoy?” Puss asks, and Tom thinks about that for a minute, and then pulls off his tattered t-shirt and jumps into the sky blue pool.

He’s swimming lazy circles when he meets a resident of the local complex, a pretty woman with dark eyes and dark skin. Tom strikes up a conversation with surprisingly little awkwardness, and soon the two are laughing about a movie or a music or some other incomprehensibly human humor. The only thing Puss can tell for sure is that they like each other: the pheromones on these two.

Puss lazes in the sunny grass until he catches a whiff of something foul. There’s a lurker in the shadows: soon Tom’s princess spots him too, and makes her exit, bolting back inside like she’s the vole to the lurker’s hawk.

Tom doesn’t linger once the princess leaves, but he’s got much cooler cat vibes when he returns to his computer.

It’s an easy matter to hack into Master’s findtwueluv.com account, and only a little bit of jiggering the back end of the platform to bump him to the top of the princess’s suggested profiles, and soon the two are chatting in cyberspace as easily as they had IRL.

“It’s not that easy,” Tom says. “I don’t want to rush things and scare her off.”

Puss paws around some more and finds the lurker, and a string of ignored messages in the PrettyPrincess’s buffer from BigTroll23 suggest that the lurker has been around for a while. If young Master isn’t careful, the ogre will move in on his best gal.

Not if the cat moves in on the Troll’s territory first.

Some research and blatant disregard for privacy laws later, Puss knows all about Mr. Lionel Draco, pseudonym BigTroll23. He’s got his own programming company and a history of sleazy online transactions.

Puss spends a few days watching investments grow, money marching into the Carabas account like mice tricked into a trap. Puss arranges for the groceries to be delivered, as Master mopes about his Princess or spends his time at unenthused programming.

BigTroll23 has noticed Puss now, too: he’s watching Carabas Enterprises. He’s poking around to find a weakness, and Puss knows he will try to take them down if he gets the chance.

They circle each other cyberspacially, testing for weaknesses. Puss sends masses of coded viruses to his databases, but he’s too strong for that. Puss must put on his trickster boots.

BigTroll23 buys out a company called Lion’s Share, which creates spyware for phone apps. Puss feels a rare sense of intimidation. Puss writes a program called Mouse Details. He knows the Troll will want it. It’s perfectly marketed, and the other companies Puss does business with jump on it. The mole-ware won’t affect them.

Puss watches the sales, and sure enough, BigTroll23 picks it up (for a hefty profit to the cat’s company).

In a matter of hours, it’s eating through his databases, purging thousands of users’ personal information. The Troll’s got one chance: a complete reboot of his servers.

BigTroll23 goes for it, and in a swift move while he’s shut down and not looking, Puss buys him out.  The cyberspying evidence goes to the FBI; that ought to keep the ogre busy for a bit.

“Check it out, Master,” Puss says when the boy hauls himself to the computer the next morning. “We’re rich. Go get your Princess now.”

Master wades through the paperwork, frowning and printing out hard copies and trying to understand. “You’re wasting time,” Puss messages. “Go get started on your Happily Ever After.” (patent also pending)

The last order of business is finding a nice house in the suburbs: a good yard with bushes to hide under, birds and squirrels to stalk, and some lovely neighborhood lady-cats to charm. Master now has the means to show PrettyPrincess a good time, and a nice place to bring her home. By the end of the year they have all three moved in, and Puss eats cream and tuna every day.

Carabas Enterprises sells out to some other companies Puss has a hand in. Those Trolls can be persistent, and Puss doesn’t want him to find them… too soon.

Of course, playing cat and mouse keeps life interesting, when you’re the cat. 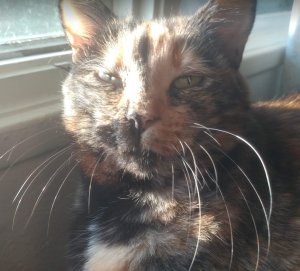 Rachel Ayers lives in Alaska, where she writes and hosts shows for Sweet Cheeks Cabaret and looks at mountains a lot. She has a degree in Library and Information Science, which comes in handy at odd hours; she obsesses over fairy tales and shares speculative poetry and flash fiction (and cat pictures) at patreon.com/richlayers.