My sire was a dragon held to be greedy even by the standards of our breed. He drugged my mother and stole me before my shell had even had a chance to soften. He sold my egg for gold to a witch. The witch, Otha, wanted a tame dragon, and Father wanted more treasure for his hoard.

He should’ve remembered hatchlings can hear through our shells, and Mother had whispered her love to each of us. I was born knowing the wrong that had been done to me. As my egg opened, and I tumbled into Otha’s waiting arms, I set her hair afire.

She kept me leashed and muzzled as she pried scales off me and trimmed my claws to the quick to get ingredients for her potions. Eventually, I chewed the leather off and set her workshop on fire.

She built a tower in the woods, pierced my wings, and chained me there. She perfected a spell to be inflammable.

I might’ve been able to rip my wings loose and tumble out the window to freedom, but I’d never worked up the courage to sacrifice so much. I hungered for the sky like it was an itch in my blood. Was it foolish to let my present life wither away in pain and darkness for the hope of sun and sky? I didn’t know, but that was the choice I made every day anew. To wait, to hope.

“Persinette”, she called me. “Little Parsley” for the rich green of my skin. “Persinette, I do not want this,” and she would gesture at the stone tower.

I had grown bigger than her at last, my scales hard, and I shifted my weight, letting her see the muscles move. I laughed when she jumped.

Scrawny I might be, but I was a dragon and, when a dragon moves, humans watch, like mice waiting for the owl. I had few joys, but making her afraid always pleased me.

She railed at me some more that I should submit. Become her familiar, her helper.

My stomach churned with disgusted weariness, a queasy brew that conjured dry ashes in my mouth. I hated her, but I wanted out of this tower.

She must’ve felt my resolve melting because she crossed to the second window she usually left shuttered and threw it open. “Here, enjoy some sun while I’m gone.”

I yawned, baring my fangs, trying not to show how good that bit of light felt baking into my scales.

She left, humming as she climbed down my tail. I had grown too large, and the only way I fit was if she pulled my tail out the window. I’d asked her: didn’t she fear some knight coming to assassinate me? And she’d laughed because she’d enchanted my tail to look like a long vine.

Alone now, I sang the song Mother had whispered to her eggs. Our flames burn together, never apart... Loving sentiments of how she’d always love me, find me. I’d been trilling her song out windows as long as I’d been alive. But Mother hadn’t found me. I was losing hope she would.

Something tugged my tail. Otha?

“Persinette! I’ve heard your song. I’ll rescue you!” A man. I could hear him muttering as he climbed, “A real maiden in a tower, like the stories!” He leapt inside, dressed in purple velvet.

At last, a human I could burn. The ashes in my mouth turned to rich, living flame. I spat fire, and his hair caught. He fell out the window, landing with a crack in the thorn bushes at the tower’s foot. The bushes must’ve saved his life from the fall, but it didn’t sound like he would thank them for the favor.

The screams stopped eventually. My visitor had dragged himself away to die somewhere else. Perhaps I should’ve just eaten him.

I crooned Mother’s song, trying to lighten a heart that couldn’t be soothed.

Otha returned in the morning. “You burned the prince and blinded him!”

“The thorns did the blinding.”

“Word’s out there’s a dragon. The king is combing the woods.” Otha looked at me in despair. “How am I to get you away, Persinette?”

“Leave me, and don’t seek to tame a dragon.” I kept my body still, but my heart hammered. The king would topple the tower and chop me to pieces. I’d never know the sky. Never see Mother—

Something massive settled onto the roof, making the shingles creak. I cringed. The king’s men here already?

Part of the ceiling tore away, and a great golden eye peered in. As the eye focused on me, I heard a rumble of pleasure.

A trill of delight escaped my lips. “Mother!”

Mother carried Otha off with us, clenched in her talons and screaming almost the whole way.

With me, Mother took great care as she snapped my chains and scooped me out of the tower. She carried me home on her back, and I closed my eyes and spread my wings over hers, feeling the way her muscles moved, feeling the cool air slide over my scales like a caress. “How did you find me, Mother?”

“That prince you set ablaze. Word spread through the kingdom, even to our hoard. I went searching, and then I heard your song and followed it.”

“Will Father be happy to see me?” The father who had betrayed me, stolen the life I should’ve had?

She hissed. “I ate your father. Foolish beast, did he think I’d forgotten how to count?”

When we reached home, Mother gave Otha to me, and though I couldn’t burn her, her spell did not protect her from my teeth and claws. She made a small enough mouthful in the end, and yet I don’t think I’ve ever had such a satisfying meal.

After, I settled into a warm ball with Mother and slept. Tomorrow my wings would taste the sky. 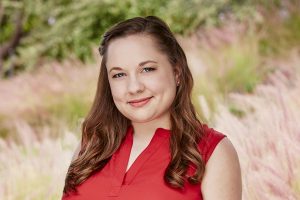 Elizabeth Walker is a writer, a swing dancer, a business operations person at NASA (by day), and definitely not three velociraptors hiding in a coat. Elizabeth lives in Southern California with her family and one yowly cat. You can find her online at www.edwalkerauthor.com and on Twitter @AuthorEDW