Cha-Cha the crow landed atop the human cadaver. He had watched the man misstep from a high-rise apartment, clip his head on the waiting hovercar, and splat in front of Cha-Cha’s lucky dumpster. Looking for shiny bits, Cha-Cha jumped off the man’s shoulder to the messy mop of blond hair.

The corpse had two blue eyes, but one shone in the morning sun.

Cha-Cha clawed at the shining eye, but it repelled his strikes. He chittered human-speak excitedly to himself. He hopped onto the corpse’s cheek and ripped out the eyelid. Thanks to countless practice, Cha-Cha extracted the bionic eye in 27 seconds. He grabbed it by the optic nerve, the eye dangling from the organic wire and bumping his chest.

In two wingbeats, Cha-Cha took flight. He headed for the closest prosthetics lab, where he’d exchange the eye for a week’s supply of peanuts. 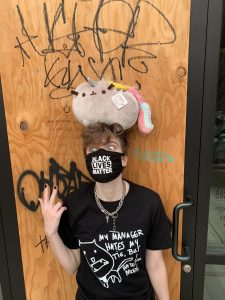 Katlina Sommerberg is living xyr best queer life in Portland. Previously a security engineer, xe left the industry after working in cryptocurrency and defense contracting. Unfortunately, hacking in real life is always boring or unethical, with no in-between. Xe has quadrice been honorably mentioned in the Writers of the Future Contest, and links to xyr published work is available at https://sommerbergssf.carrd.co/#