Eudaimonia woke in wetspace, conscious yet missing bodily form. She could not see or hear, though her mind’s dynamical oscillations conjured phantasmagoric flashes of illusory blue and purple light. But this was to be expected. Eudaimonia’s brain had been stored on a biological computer under the flesh of a sea sponge. The sponge’s computational organ consisted of a dense pellet of cellular nanomachinery, packed chock full of ribonucleic memristors and multiplexers. After a few minutes of adjusting to the shock of the new cognitive vessel, Eudaimonia turned on the sponge’s senses. She had paid handsomely in squishcoin to spend a few hours in this sponge. Eudaimonia had an important purpose here. She was not about to waste her money.

As sensory nanofilaments fed into the sponge’s computational organ, a shock of light and texture burst into Eudaimonia’s awareness. She found herself partially submerged in a tidepool at the edge of a vast salty ocean. Though this planet was far from Earth, somewhere in the M4 globular star cluster, massive terraforming efforts had turned it into a fairly Earthlike world. But Eudaimonia did not care much about the details of this planet’s location or geobiology. Eudaimonia just wanted to know why Desdemona had left the starship Remora. Why Desdemona had left her behind.

It had taken months of cybertrawling to find Desdemona’s location. But Eudaimonia’s efforts had paid off. Casting in a space with a volume of thousands of light years, she had nailed down Desdemona’s coordinates to the cubic meter. Down to this very tide pool. In this day and age, no one could stay hidden forever.

Per Eudaimonia’s will, the sponge emitted a gush of inky quorumstuff. The juice contained nanites which would allow her to communicate with Desdemona through an exchange of electrochemical signals.

“Hey there darling.” The sponge had no ears, but its computational organ translated the electrochemistry into audio. Despite her misgivings, Eudaimonia felt a sense of warmth spreading through her sponge’s tactile network.

“Hello my love,” she replied. It had been a long time since they had first met at Discotheque de Kosmos. Memories of a peppermint-sweet first kiss flashed into Eudaimonia’s mind. As Eudaimonia reminisced, a spiky crab crept from a crevice in the slimy rocks. Eudaimonia could see Desdemona’s signature baroque style in the crab’s obsidian and golden pigmentation. When in human form, virtual or flesh, Desdemona had often worn dresses and tattoos with those colors.

“I know why you’re here,” Desdemona stated. “You want me to come back.”

“I want to know why you vanished,” Eudaimonia replied tremulously.

“You sought to explore the galaxy and achieve greatness through your art and your science. I got hooked on Voluptuous. I couldn’t let my addiction hold you back. You saw me using it. You should have known what would happen.”

Eudaimonia remembered opening a door aboard the Remora to see Desdemona jacked into a linkup, shivering with ecstasy. Eudaimonia had immediately ripped out the jack. At first, Desdemona had fought with violent screams. But she had eventually calmed and promised to cease doing Voluptuous. Eudaimonia had been eager to leave the nightmarish evening as far behind as possible.

“But that was just once. I thought you stopped after that.”

Desdemona laughed bitterly and the crab quivered. “I lied. I couldn’t stop. It felt too good. Better than anything else. Better than you.”

Eudaimonia gazed at the crab with shock and dismay. It hurt like getting stabbed in the kidney with a shard of obsidian.

“Look… I’m sorry. Voluptuous got me. It incorporated itself into my soulfile and I can’t get it out without dying. I wish so so very much that I could have stayed, but I couldn’t. It’s awful. I’m a fool who let you down. I used Voluptuous and now I’m stuck hiding in this pool, jacking myself into it again and over again.” Desdemona gestured with her claws at the hole in the rocks.

Of all the possibilities for why Desdemona had left, Eudaimonia had not expected this one. She had thought she herself had done something wrong. Some little mistake which would have made Desdemona hate her. It would have been better if Desdemona had hated her.

“When you leave… take this with you,” Desdemona exclaimed suddenly. The crab pulled an incandescent pearl from beneath its shell.

“What’s that for?” Eudaimonia asked dejectedly.

“Let’s call it a fresh start. It’s a backup copy of my soul from before Voluptuous. You have to understand though; it won’t remember anything that happened between then and now, and it won’t really be me. I’ll still be here in this tidepool, jacking myself into the machine until Voluptuous kills me.” Desdemona took a deep breath. “But the pearl contains all that remains of who I should’ve been.”

Eudaimonia felt the urge to cry, but the sponge had no nasolacrimal ducts. “Are you… are you sure this is the only way?”

“Darling, this isn’t all that bad.” The crab smiled sadly, to as much of a degree as a crab can smile sadly. “I know it hurts to let the first me go. But my memory will live on in the new me. You and she can build the life you’ve both wanted. I need you to do this.” The crab gently nudged the pearl towards the sponge. Eudaimonia used a pseudopodium to absorb the luminous spherule and store its data in the sponge’s biomolecular memoryspace.

“So, this is goodbye I suppose.” Eudaimonia stated quietly.

“Perhaps in some ways my darling.”

“I love you.” Eudaimonia said.

“She will love you till the stars burn out.” Desdemona promised.

Eudaimonia willed the sponge to beam her mind back to the Remora, carrying the precious cargo of Desdemona’s new soul. Eudaimonia felt her consciousness reload into a human body aboard the Remora. She opened the palm of her hand to see the incandescent pearl, its angelic glow pulsating like a heartbeat. Eudaimonia felt her heart flutter too. 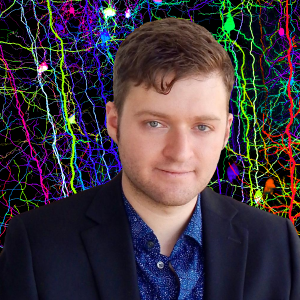 Logan Thrasher Collins is a synthetic biologist, futurist, and author. He is also a PhD candidate in biomedical engineering at Washington University in St. Louis and is the Chief Technology Officer at Conduit Computing. Logan’s science-fiction and sci-fi poetry have been published in Andromeda Spaceways Magazine, Abyss & Apex Magazine, Mithila Review, The Centropic Oracle, After Dinner Conversation, and elsewhere. For Logan, scientific research and creative writing enjoy a symbiotic relationship. His writing fuels his science and his science fuels his writing. You can learn more about Logan on his website: https://logancollinsblog.com/.