On the morning of the Seventh Day, the Garden of Eden was calm and peaceful. The Serpent stretched. She had to fix that. Perfection was very, very boring.

She crawled through the tall grass to the pride of lions sunning their fur in a clearing by the Euphrates’ bank.

“Hey, did you know what lambs are made of? Meat. Fresh and juicy meat. Why would they be made of meat if you weren’t supposed to eat them? Go on, give it a try,” she whispered to a lioness, her scaly tail pointing at a herd grazing close by. She had never liked lambs.

The lioness rolled over, her amber eyes half-closed. “Too hot to run. The lambs don’t bother me, so I don’t bother them.” She yawned and continued her nap.

Disappointed, the Serpent moved on to a brown bear eating berries by the river.

“There are fat fish swimming in the water,” she told him. “Juicy, writhing salmons and carp, filled with nutrients for great fur. And they taste much better than berries.”

The bear looked up, his muzzle smeared with juice. “But I like berries. Why should I get wet and harass the carp?”

By noon, the Serpent was annoyed. None of the Garden’s animals had humored her. God’s last creations, the furless bipeds, seemed promising, but she hadn’t dared to approach them. According to the sparrows’ gossip, He had made the male after His own image. And judging by His blatant preference for lambs, the outcome couldn’t be good.

Curled around the Tree of Life, the Serpent decided that Creation needed fun–mischievous–creatures. She had watched Him do it from clay with the humans. How hard could it be, especially with the aid of the forbidden fruit? Across the grove, the man scratched his crotch, watching the clouds. It couldn’t get any worse than that.

She gathered a pile of soft soil from around the roots of the Tree of Life and curled around it, kneading and shaping to the best of her abilities. Perhaps the humans’ opposable thumbs had indeed some merit. It took her the better part of the afternoon, but she finally stretched and inspected her handiwork.

The creatures looked good: one male and one female, for all creatures needed a mate in life and an accomplice in mischief. She had made the male bigger and thick-headed, with fast claws and toxic urine to leave his mark all over Creation. The female was more delicate, but faster and fierce when defending her litter. The Serpent lashed her forked tongue and hurried up the Tree of Knowledge. The full moon was ascending and she hadn’t finished.

She grabbed a fruit and squeezed it over the creatures, anointing them.

“I give you knowledge of Good and Evil,” she whispered, and a sudden breeze shuffled the foliage around them. The clay animals trembled, the mud turning to fur and flesh. “I give you sight to see through the dark hours of the night and through the darkness of souls. May the moon be your ally, may the sun warm your fur. Tread fast, tread soft, and knock down all fragile objects in your path.”

She breathed in and spat at them.

“I give you free will, your choice either poison or cure. Whatever divine spark lays in me, I share it with you.”

A tremor ran through the Garden. She rubbed a fruit from the Tree of Life on them, and dried clay fell of, revealing soft fur underneath.

“Cats, I give you Life. Go forth and multiply. Do it often, do it loudly, until your offspring overruns Creation.”

The kittens blinked and sniffed the air. Their eyes glowed, reflecting the moonlight. When they noticed each other, she held her breath. Their eyes grew huge, their backs arched and their tails stood rigid, upright and fluffed up. Bolder than her ginger mate, the calico kitten dared a sniff of his muzzle. A shy lick followed the sniff, and in no time they were curled together, grooming each other. Soon, they grew bored of grooming and started chasing each other’s tails.

The kittens stalked unsuspecting fireflies, shredded leaves, and clawed their way up onto the branches of the Tree of Life. The Serpent lay belly up beneath it, laughing herself breathless. It was almost dawn when the kittens, exhausted, climbed down. They curled by the Serpent’s coiled body and fell fast asleep, their whiskers and tails twitching in dreams of hunt and mischief.

The next morning, the Serpent sunned her scales, watching the kittens play. She’d have to feed them soon. They’d probably manage to catch bugs or even a frog on their own, but she’d rather keep them from hunting until they were old enough to defend themselves. And, hopefully, hunt decent prey, like lambs.

A sudden movement caught her eye. Barely turning her head, she spotted the human female hidden among the thick bushes a few paces away. Wide-eyed, mouth agape, Eve watched the kittens play. The serpent lashed her forked tongue and stifled a snicker. Behold the solution to the kittens’ feeding problem.

Eve licked her lips. She walked out of the bushes, each step slow and cautious. She reached out to touch the kittens.

They fluffed up and arched their backs. The calico growled and showed sharp little claws.

Eve pulled back her hand, her brow furrowed. “Why is it doing that?” She turned to the Serpent, her eyes moist. “Why doesn’t it like me?”

“Perhaps it’s hungry.” She tilted her head toward a nearby plain. “There’s a herd of cows grazing over there. Perhaps if you brought them some milk they’d let you pet them. They are very soft, you know. And they purr.”

“Purr is bliss,” she replied and watched Eve hurry to the nearest cow. The purring had been her greatest idea. It overpowered the opposable thumb any time.

By noon, the kittens had warmed up to Eve. She brought them milk and they rubbed their backs against her legs, played with her hair and curled on her lap, purring.

Half-asleep, the Serpent lay content under the Tree. Her work was complete. She had created perfection and found a guardian for the little ones. At the threshold of a dream, a male voice somewhere close awoke her.

Eve’s gaze darted from the napping kittens in her lap to the source of the voice and back. The calico stretched and curled tiny paws over her face. Eve’s shoulders slumped.

The Serpent stretched her neck. She couldn’t let her leave–not yet. Not for him.

The serpent rolled her eyes. “Can’t he do that on his own?” What’s the point of having an opposable thumb if you don’t use it?

“The kittens need you more,” she hissed. “They can’t milk cows.”

Eve glanced over her shoulder. “I suppose I could stay a little longer.”

His voice was thunder and lightning and Eve fell face down on the ground. The kittens started from their nap with a hiss and climbed up the Tree of Life. The Serpent remained calm and stretched her upper body, certain she saw Adam’s ratty face hidden in the bushes at the back.

Amidst a host of angels and seraphim, their Lord God appeared before them.

“What have you done?” He turned his fiery gaze to Eve. “Have you not a mate, woman? Go to him. He has been looking for you everywhere, sick with worry.”

Eve stood up and hurried away.

He turned to the Serpent. “Call them down.”

She snickered. “Even if I do, they won’t obey. I forgot to include obedience when I made them.”

God raised an eyebrow. “Of course you did.” He stroked his beard and then waved at one of the seraphim. “Bring them before me, so I can inspect the full extent of the Serpent’s insubordination.”

The seraph flew to the kittens perched upon a branch. “Follow me to your Lord God.”

Their eyes grew wide, fascinated by the incessant flutter of the seraph’s six wings. The calico outstretched her forepaw to catch one. She licked her whiskers, wagged her behind and lunged at the slowly retreating seraph. A heartbeat later, the ginger kitten followed her.

Amidst hisses and a cloud of torn feathers, the unfortunate seraph flew to its master’s feet. An archangel hurried to its aid and managed to detach the berserk kittens from the torn wings.

The kittens stood at God’s feet, and He leaned over them. The ginger kitten was busy chasing a floating seraph feather, while the calico seemed mesmerized by God’s beard. She attempted to paw one of the long white tendrils, but the feather caught her eye and she went after that instead.

The kittens now chased each other around God’s feet, oblivious to the imminent danger.

He frowned. “I gave Man dominion over all creatures. They should obey him.”

“Kittens didn’t exist at that time. They are excluded from the deal.”

“They will only disrupt peace. The fruit is forbidden for a reason.”

“You said not to eat it. You never said anything about other uses.”

His frown deepened. “Semantics.” He waved to His host. “Lucifer, escort the creatures out of Eden.”

“No!” She darted forward, placing herself between kittens and archangel. “They’ll never survive outside.”

“They are not defenseless. You should know that, being their creator.” His voice was firm but not unkind.

She hung her head. “But they are just babies…”

God signaled to Lucifer, who stood shifting his weight from one leg to another. “Well?”

Lucifer bit his lip. “My Lord God, they will not come.”

The kittens cowered at the roots of the Tree, a multicolored bundle of hissing fur. God turned to the Serpent.

“They will listen to you.” The promise of flood and fire now lurked in His tone. “See to their needs, but escort them out.”

Defeated, she nodded. “But will they endure? You’re omniscient. Please, tell me.”

He tilted His head sideways. “So be it. This I tell you: they will be revered as deities and hunted as demons. Often my mortal servants will know them to be not of my making. They will deem them evil, drown them in water and burn them with fire.”

“And you will do nothing to stop them?”

“I do not advocate their actions, and they will not go unpunished.” He smirked. “What happened to your support of free will?”

“It has gone with the kittens.”

The Serpent escorted the kittens through the wilder lands to a secluded oasis. They’d have fresh water there, and trees to climb on, and unsuspecting frogs and birds to hunt. But they’d be alone, easy prey to all the dangers that lurked outside Eden.

Back in Eden, she could no longer sleep in peace, her dreams now tormented by images of the kittens suffering. She had to find them a guardian, to shelter them in the eons to come. Had He not said, “See to their needs?”

Come morning, she climbed up the Tree of Knowledge and grabbed a fragrant fruit, then headed to the clearing where the humans dwelled.

“Eve! I have something for you.” 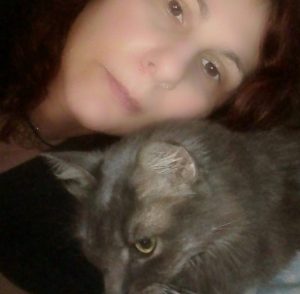 Christine Lucas lives in Greece with her husband and a horde of spoiled animals. She’s a retired Air Force officer and mostly self-taught in English. Her work appear in several print and online magazines, including Daily Science Fiction, Pseudopod, and Strange Horizons. She was a finalist for the 2017 WSFA award and a collection of her short stories, titled Fates and Furies was published in late 2019 by Candlemark & Gleam.