The fox hires children to bring him coffee every day.

He had discovered the wonders of coffee, and the even greater wonders of handcrafted espresso drinks, quite by accident, when a human woman had left her single sourced Kenyan blend with soy on a bench without a lid, and then, followed this up by leaving a vanilla soy latte on a neighboring bench – again, without a lid. It was quite safe to say that the fox became obsessed, and equally safe to say that it was a difficult obsession to indulge.

Humans, as it turned out, did not deal well with foxes trotting into their stores and ordering coffee. Just entering a café presented difficulties, with doors slamming shut, things flying in his general direction, and – in one particularly awful case that the fox still remembered with a shudder – a gun getting pulled out. And that was when he could manage to open the doors at all.

(Why did humans make their doors so heavy and hard to push and pull? It was one of many mysteries that the fox feared he would never solve.)

Ordering once inside was no easier. Most refused to believe that the voice they heard was indeed coming from the fox, assuming that it had to be some sort of trick. In some cases, they even pulled out those horrible things humans called cell phones to take videos – something virtually designed to get the fox into serious trouble, if and when anyone took those videos seriously. Almost no one would take his order. And then he had the issue of payment – he had no access to those plastic things humans used, of course, but the café staff seemed reluctant to take paper payments from him, even when he was careful to barely lick and chew them.

All before either trying to drink the beverage in the café, in front of numerous eyes and cameras, or attempting to take out his handcrafted beverage without spilling a drop.

And always at the grim risk of being captured and turned into some sort of performing animal. Others had managed to conceal their ability to speak after capture, but he was not naïve about his own character: he would start blabbering away at the mere hint of withholding coffee.

They present their own disadvantages, of course. Some are simply too young to be able to enter a café and order coffee for a fox without extremely awkward questions. Some are simply too old, too adult, to believe that a fox – a fox – could really be asking them to make a coffee run. Increasing numbers do not speak English or Spanish, the only human languages the fox has any mastery of – though he prides himself on his fluency in no less than 50 animal languages. And, of course, the children must be approached when no adult is around – something that also presents a difficulty.

And the children, alas, are just not reliable. One would hope – and the fox has hoped, more than once – that his status, as a talking fox, would keep them fascinated, but this hope – unlike the handcrafted coffees – has so far proven unfilled. Which means he must keep searching for new children, again and again. It is exhausting.

Fortunately, he has coffee.

When he can, the fox pays the children in hard cash, robbed from individuals careless enough to leave their backpacks and other bags unattended in parks. The fox is not particularly good with zippers, but he knows a few crows who owe him various favors – and who are not unwilling to help if it means a chance at a fresh baked scone or banana bread.

Unfortunately, the fox and the crows find fewer and fewer paper bills in backpacks these days. The fox blames the increasing use of cell phones for everything, including buying coffee – really, do humans not realize how dangerous those things are – though the fox could equally blame the ever louder warnings about certain thieving crows.

Whatever the reason, however, it means these bills must be saved to pay for the handcrafted coffees, scones, and slices of banana breads. The fox might – and does – steal from humans, but he would never ask their children to steal for him. He does have some ethical standards. Not many – as he would be the first to admit – but some.

And as a practical matter, the fox highly doubts that any of these children could steal a venti soy hazelnut without getting caught.

And so he pays them in stories.

In promises of vengeance.

And if, afterwards, people notice a rise in fox bites, or a few mysterious animal break-ins that happen to shatter some priceless, beloved possessions, or even a corpse or two, necks marked by sharp teeth –

Well. Animals will be animals.

No need to let that deprive the fox of his morning coffee.

Other short stories by Mari Ness can be found in Tor.com, Clarkesworld, Lightspeed, Uncanny, Nightmare, and Diabolical Plots. Her poetry novella, Through Immortal Shadows Singing, is available from Papaveria Press, and an essay collection, Resistance and Transformation: On Fairy Tales, from Aqueduct Press. 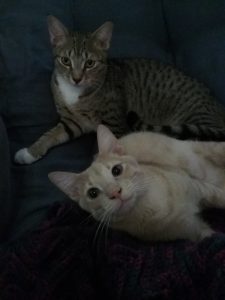 1 thought on “Coffee and the Fox”