“I should ask the rest of the forest,” the tree thought to itself, and so it prepared its words as best it could, coiling them through the capillaries of its root system, trying to explain that it wanted to become something else, but not just anything else, a particular something else that it could not put a name to.

When, breathing out its words with the next morning light, it told the other trees of its forest, they scorned it. “That doesn’t make any sense,” the other trees breathed out all together the morning after. “What could you be except to be a tree,” they said the next day, and then, “Think of your mother you sprouted from! How ashamed it would be, to know that its daughter was ashamed to be a tree, that its daughter yearned to be something else, something that it could not even explain. Think of the daughters you shall some day sprout in turn! Think of how ashamed they will be! There is nothing better than to be a tree, and there is nothing you can be besides the tree you are.”

Every night, the tree breathed in through its bark and roots and needles, breathed in all the disbelief and scorn of its aunts and sisters and cousins and the whole of the forest. “Perhaps I am foolish,” said the tree to itself, “to yearn to be something that I cannot even put a name to.” But, just as it was twining the words oh, it was only a joke, of course, I was only joking, what else could I be except a tree? hahah into its root system, it heard a small and steady voice from deep within the forest, farther than it had ever heard before.

The tree stopped. It unwound the jokes and excuses and apologies from its root system, and then stayed still and quiet. It thought for a dozen years or more. While it thought, it realized that the voice it had heard was no ordinary tree — it was the voice of an albino, a poison-eater, growing short and soft at the heart of the forest. When the tree realized this, it was at first upset. Its mother had sprouted it to be a good and proper tree, tall and green and red and sunlit, not the sort of tree that spoke to poison-eating albinos or other such outsiders. But then, after only a few years, it thought, “Who am I? A tree that wishes it was not a tree. They are right. I am no more and no less an outsider than this albino.”

So, in the end, it sent a message out to the albino through its roots, saying “I hear you, but what is it you see? What is it that I might become?”

A few months later, the albino responded with a message of its own. “You are yearning,” it said, “for your reincarnation. All life — from the great red trees to the tiniest ant, even to albinos like myself — is contained within a great cycle of reincarnation. You, a great red tree, grow atop this cycle, its pinnacle and its fulfillment, but you still hold within yourself the yearning that brought you to the pinnacle.”

The tree was astonished to hear the albino’s teaching. “But how do you know this?” asked the tree over the next month.

“I know this because I am an albino and not a tall and noble tree such as yourself. I too yearn to be something beyond my self. How could I not, in my position? So I struggle to fulfill my role within the forest, to take up the poisons and to grow my pale needles, that I might someday be reborn as a proper tree, tall and green and reaching from the river to the sun itself.”

“I see. But how is it that you came to understand this?”

“I was taught by my mother, and it by its mother, and so on for a hundred thousand generations and a hundred thousand thousand years. It was then, long ago, when beneath the branches of our ancestor a particular dimetrodon obtained the absolute consciousness. Before she departed to disperse her teachings among her own species, she conveyed to my ancestor the whole of her realization, out of gratitude for the shelter and comfort it had offered her during her ordeal. This knowledge has been carried along my line even to the present day, even to the tips of my small pale branches, just as it was first taught to us those many ages past.”

“Astonishing! Can this dimetrodon teach me, then? To become whatever it is that I must become?”

“She cannot. She and her species are long extinct. What’s more, in the time between then and now, a great ocean has sprung up between that world and our own, and I fear my humble roots could never cross it.”

“The answer,” it told itself at last, “is only across an ocean. How far could it be, for me to grow my roots?”

Over centuries and over millennia, the tree thought and thought, pondering the riddles of reincarnation and of yearning and of what might be a higher form of life than its own. It sunk its roots down deep into the earth, through the soil, through the rocks, beneath the river, down beneath the continental plate itself to where the rocks were dry and hot with the heart of the earth. From there it spread its root system beneath the ocean, stretching further and further still — refusing to sprout and refusing to die, until it was the oldest tree in its forest, until all the other trees were its nieces a thousand times and had never even heard it speak — it grew its roots until it had spread across the whole of the ocean, to the distant lands on the other side of the world where its diminutive cousins still lived their small and simple lives. Joining its root system to theirs, it called out to them in greeting.

“Cousins! Once, long ago, we were a single forest. Even though we now are split apart by an ocean, I call to you from across the sea. I have been told by a wise albino, a poison-eater of my people, that in your land there are great sages who know all things in heaven and earth. Is it true? Can they answer me? Can they tell me what it is that I yearn to become, and how I might become it?”

“Cousin,” said one of the trees across the ocean. “You have returned to us at last! Of course we welcome you. Of course it is true. Why, even now, here comes the butterfly-sage Zhuang Zhou, a master of all sorts of transformations. If you yearn to become something else, anything or any particular thing, then surely he shall be able to instruct you.” And just so, a butterfly presently alighted on one of the tree’s roots, where it stuck up from the ground.

“Are you the sage Zhuang Zhou?” asked the tree.

“Sir, I am a tree from far across the ocean. Seeking your wisdom, I have these many millennia pushed my root system through the rock of the earth and across the ocean itself. I have done this because I yearn to become something, some particular thing, but I cannot put a name to it.”

“Put a name to it?!” gasped the butterfly, appalled. “What has it ever done to deserve that?”

“So that I might—” began the tree. But it could not answer the sage’s question. It thought and thought, and by the time it had an answer the butterfly sage had died and his great-great-grandson had returned to the conversation.

“Psshaw,” scoffed the butterfly. “A name will only stop you from understanding it.”

“But the cycle of reincarnation—” said the tree, and began to explain what the albino had taught it. By the end of its explanation, the butterfly had died and its own great-great-grandson had returned to carry on the conversation.

“What a waste!” said the butterfly, “what a waste of a life is the service of reincarnation. Do not wait to become some promised thing. Do not align yourself in the service of others. You need not sacrifice the life you have to some future promise! Be yourself as useless as you can, give the fire and the axe no place within your body, and you shall surely already have become whatever you yearn for.”

“But—” began the tree but the butterfly, impatient, interrupted.

“I’m afraid it is already too late for you, my friend,” he said. “If only you had come to me earlier, I could have taught you to grow strange and useless and twisted, so that no one would ever seek to cut apart your body and make use of it. But over the millennia, you have grown yourself so straight and tall and pure. What’s more, your wood is proof against both fire and water. You have made yourself far too useful. Surely in some future century men will come with fire and axes to chop you into pieces and end your life. The only escape for you now is to transform into something entirely different.”

“To transform yourself entirely is simple: you must dream, as clearly and lucidly as if it were real, and in that dream you must live a life so entirely that when you wake you will not know if you have awoken from a dream or entered one.”

“But what is a dream?” asked the tree.

“For a tree such as yourself, I suppose a dream must be a very strange thing indeed,” answered the butterfly. “For your whole people are not given to fancy or imaginings or anything but deep and abiding thought. So, to dream, you must let your mind wander as it will, across all the network of your root system, across the oceans and into the skies. Do not cease, do not try, do not empty yourself, simply let your mind be what it is. Through this, perhaps, a tree might dream. If you can dream, then in each dream you can experience an entire life, and in all those lives surely you shall eventually find the one that you wish to live; and in the finding of it, you will have already become it. Surely it shall work for you. Even if it does not, though, it is your only hope.”

“Thank you,” said the tree, and set its mind to dreaming.

At first dreaming was so hard that the tree found it almost impossible, but over years and centuries of practice it began to imagine itself as all manner of things. It imagined itself as a salmon, and in the course of a single day’s breath it lived the whole of a salmon’s struggling life. “A strange thing, to be a salmon,” thought the tree, “but it is not what I yearn for.”

It wondered, as it read this story about itself, “Is it this that I have yearned for?” But only you can answer that.

special thanks to Aaron Timm for her advice 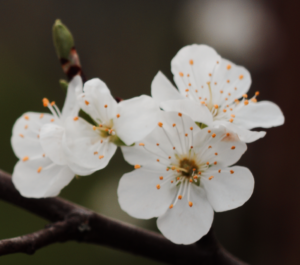 P.H. Lee lives on top of an old walnut tree, past a thicket of roses, down a dead end street at the edge of town. Their work has appeared in many venues including Clarkesworld, Lightspeed, and Uncanny Magazine. From time to time, they microwave and eat a frozen burrito at two in the morning, for no reason other than that they want to.