Several years ago, a certain gardener tied a decorative stone mask to the branches of a willow tree. The mask hung slightly askew, causing the lower half to fill with water after storms. Insects and birds drank and took leisurely dips in the deep chin during hot afternoons.

One day after a particularly strong downpour, rain so weighed down the mask that it dropped into a puddle of mud. There a tree frog happened upon it and laid her eggs.

“Well,” thought the mask. “Such desecration is hardly fitting for a work of art.”

The mask liked to think of itself as a religious icon, set in the tree as an offering to God, when actually it was only a bad birthday present from a wealthy but senile aunt, put in a tree to get it out of the house. At first, the mask grumbled about the frog eggs, denouncing them as personal insult, but as it muttered, it came to consider itself to be a model teacher, the perfect molder of young minds.

When the tadpoles hatched, the mask was waiting and spoke, not soft baby-talk, but stern, solemn stuff that it believed would build character.

“Now then, my polliwogs, we’re going to have to set a few ground-rules,” the mask informed them. “I’m not claiming to be infallible but I’ve seen more of the world than any of you have. There’s nothing I can do if you refuse to take my advice, but I would be pained if one of you did something foolish and got yourself hurt out of it.”

None of the tadpoles said anything for a long while. “Are you our mother?” one finally asked.

“No, frogs lay their eggs and abandon them. That is the way of the world.”

Although the mask knew nothing about being a tadpole, it constantly told them how to act.

“Don’t waste your time swimming with your tail. It won’t be around for long” and “Enjoy breathing under water while you can. Soon you’ll be out with the kingfishers and raccoons. What a living nightmare that will be… for as long as you stay living.”

The tadpoles knew no other life but that of the mask’s nagging. Life is strange for a little amphibian changing from a plant-eating, water-breathing, legless and tailed creature into a frog. When they lost their tails, they crawled from the water, expecting to be without the mask’s commands as well.

“And just where do you think you’re going?” The mask waited until the last had emerged.

“We’re going to climb and eat bugs and peep and mate. In that order. We are tree frogs, after all.”

“And what about me? Are you all going to forget about me after all I’ve done for you?”

All but one of the frogs stopped and turned around. That single frog leapt into the bushes and never saw the others again, but the rest of them clamored about the edge of the mask.

“Well, what should we do?” asked the boldest.

This was the mask’s crowning moment. “I want you to make faces.”

An easy request to a frog– they twisted their mouths, stuck out their tongues, and bulged their eyes even farther.

“I want you to paint, to sculpt, to carve into stone.”

The little tree frogs said nothing. Their feet were made for jumping, climbing, and even sticking to windows, but carving into stone was a bit much to ask.

“I don’t think we’ll be able to,” one of the frogs stuttered. “I think, maybe, we ought to go catch some bugs.”

“Poppycock!” the mask thundered. “I’ll have none of that backsass! Listen to me. I will teach you. You, with the birthmark on the belly, fetch us some twigs. And you with the brown eyes, gather some colored dirt. Everyone else get pebbles, as large as you can carry. And think faces!”

Tree frogs are a trusting species and did as the mask commanded. They returned with huge quantities of wood, soil, and rock, more than nature ever intended a tree frog to lug.

“Careful, careful,” the mask sputtered as one of the frogs knocked over a pile of pebbles. “These are your supplies. Now get to work.”

From his position in the mud, it was difficult for the mask to supervise the frogs’ progress but it did keep a sharp eye for the unorthodox.

“You with the leaves! What are you doing?”

“Don’t waste your time with such foolishness,” the mask snapped. “A frog face isn’t real art. You have the perfect model before you.”

By and large, most of the frogs created faces that were quite crude but clearly modeled after the mask. It pretended to be surprised. “Oh, especially good,” it raved over images that left out his dents and scratches.

“Look upon your work, my children,” the mask exclaimed as the tired frogs prepared for bed that morning (for tree frogs are nocturnal). “Know that all that see it will frolic and rejoice.”

It was the gardener who became the frogs’ harshest critic.

“What’s all this then?” he shouted when he stepped in the sculptures. He kicked at faces and rubbed them between his fingers, wondering at the possibilities of extraterrestrial origins. “Must have something to do with all the damnable bugs,” he finally decided and sprayed poison all about the yard.

The poison upset the delicate balance of life within the garden. When the famished frogs ate the toxin-covered insects, they died almost instantly. True, most insecticides are not so deadly but then again, most are not afflicted upon frogs who have been kept up all night, creating folk art.

The few who survived were devoured by a garter snake who wandered by and the mask was later sold at a garage sale for less than a dollar. The garden was a still and solemn place for a long time to come.

Eventually the single tree frog who had fled the mask’s rule returned to gaze upon the site of his childhood. He’d become a great singer, so skilled that snakes and raccoons gave him safe passage.

“Frogs don’t sculpt,” he whispered up to the ghost of the mask, but there was nothing in the tree to hear him except a few juicy caterpillars, and he made short work of them. 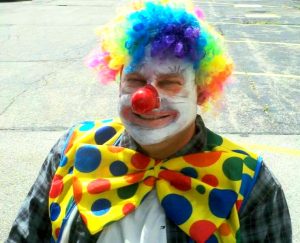 A Cincinnati resident, Mark Mills teaches composition, literature, philosophy, and film studies at Indiana Tech University and Chatfield College. He has published work in Tor.com, Grievous Angel, Short Story America, and several other publications. He has worked on and appeared in several low budget movies, including Satanic Yuppies, Live Nude Shakespeare, Chickboxin’ Underground, Zombie Cult Massacre, and Uberzombiefrau. He currently is occupied with his family, a large number of animals, and many unpublished stories.