If legends of lost cities were true on Earth, some credit for these tales went to the whales that lived on the planet of Starym, situated outside the reaches of the Milky Way.

Mahi swam through the endless swirls of stars and planets, the universe expanding endlessly around her.

A piece of her home was securely attached on her back. It was the part of the city she adored the most: six buildings set in a circle; the arch leading towards them decorated in two thin strands of Shimmer Moni—the rarest gems of the universe, the only existing ones of their kind.

She knew why she was chosen to protect the most precious part of the city—the part that the Arras would actually steal when they invaded Starym—she was the fastest swimmer and had the best ears.

“Remember our songs”, their leader had sung to her. “Keep your ears open. When the dangers pass, we’ll sing for you to come back home.”

Mahi had sung back her consent, and with the city on her back, swam up through the cyan skies of her world and into the outer darkness.

It would take her only three whale days to reach the nearest sun system. There was a planet there, with everlasting sapphire oceans like the ones back home, and that would be the best place to hide the city till the Arras left.

Mahi wondered if the Arras would stop attacking if they shared a bit of the Shimmer Monis with them, or whether they would increase the frequency of attacks if they realized that Starym whales indeed possessed the gems.

Either way, they couldn’t risk it—for the Arras wanted the gems for the decorations of their planet, and Staryms needed it. Only when the light reflecting off the strands of Shimmer Monis fell on the Starym eggs, did the eggs hatch.

Mahi’s eyes shone in the light of a billion stars as she swam. The survival of her species rested on her back. Literally.

When Mahi saw the blue world for the first time, it had curtains of green and red dancing over it, softly waving in the stillness of the skies.

The leader’s words swam in her head.

If you sees sky lights, dive into waters beneath it. Less chances of discovery there.

She followed the lights towards the oceans below, and she stopped for a moment in surprise—the waters really were as blue as those back home.

On her back, the city disappeared, part of an ancient trick her ancestors mastered while building their world—in other worlds, their cities would not be visible unless Starym songs were heard.

She crashed through the surface ice. Underneath, the world was cold and dark, and Mahi felt the first aches of loneliness rush through her.

She hoped that the Arras would leave quickly, but time passed differently in different planets, and she wondered how long it would be before she could go back home.

There were other singers in the waters, but they spoke in a different language. They swam past her, calling out to each other, nudging and playing in groups as they did so.

Mahi thought of her friends and the skies and the oceans where she swam, and she thought of Starym songs, similar and yet so different from the songs of these creatures.

Sometimes, she was afraid that she would forget her own language, and so she sang too, her voice muffled in the lonely blue.

No one answered her, but above her, the city came into existence, its Shimmer Monis glowing in the dark. It gave her hope that it was all real, that she was not really alone, that a part of her world was always with her.

She was careful to keep the songs short, to make sure that nobody saw the city.

But rumours started of mysterious songs and of waters that glowed, if only for a moment, in the chilly waters beneath the Northern lights.

When we sing for you to come back, reply that you are safe, that it has not all been in vain.

The day Mahi heard the song, there were disturbances in the water. Species with four limbs were swimming towards her, pointing. Mahi did not know what they shouted to each other, but she knew that they were after her when they started throwing things towards her.

She backed away slowly, trying not to sing out in panic. Were they Arras? But no, they looked different—

A song broke through the universe, and Mahi froze. They were calling her back!

But above her, the city had started to glow softly, and the noises behind her increased.

Mahi swam upwards, as fast as she could. In Starym waters, she would have been faster. Here, she was slower, but still faster than the creatures behind her. As she broke through the surface, she sang back, telling them she was safe, that she was coming back home with the gems that gave them life.

That night, the explorers in the Arctic ocean stared up in wonder as a glowing city rose up into the skies, carried by a creature that looked like a whale, yet had stripes of colours they had never seen before.

And then the creature vanished, and the skies held only the dancing lights. 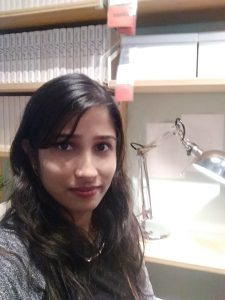 Tamoha Sengupta lives in India, but is happy to have visited many places on Earth and beyond at the expense of words. Her fiction has appeared in Abyss & Apex, Daily Science Fiction, The Colored Lens and elsewhere. Once in a blue moon, she tweets @sengupta_tamoha.