A: You haven’t eaten for two months so you creep up slowly through the steaming manhole, claws grasping the concrete, and step out onto the busy sidewalk. Here the lights of Manhattan are overwhelming, as is the stinky traffic and horrible indigestible donut smells. It’s really not a nice place to be. But you’re soooo terribly hungry. Got to try something; you’re way too young and too little to go to the great swamp in the sky.

So what do you want to do? Choose B if—yay!—you want to try nomming a passing tourist. Their tasty-looking ankles scurry in every direction. They smell soooo delicious. Choose C if that’s too scary and much better to go back down into the sewer.

B: A yummy-looking man with “I love NYC” t-shirt and khaki shorts lingers not six feet away on the sidewalk, obviously a tourist. He’s stopped to take a photograph and is gazing up wide-eyed at the skyscrapers; he hasn’t noticed you at all.  So you sidle closer past a stern-looking woman in a green suit. At first the woman doesn’t notice you, but then she does. And screams.

You stop in mid stride, jaws open. Everyone is turning, pointing and yelling, running away from you.

The delicious man dashes into a nearby department store as you snap at his heels, while wailing sirens echo down the street. Several NYPD squad cars pull up and a bevy of policemen pour out reaching for their guns.

You flee north along Seventh Avenue, dodging yellow taxis and fire trucks which are now also chasing you.  You pass a store called “Lacoste.” Its logo looks a lot like you—a friendly creature—how wonderful! Perhaps you should trundle in and seek sanctuary as rather a lot of burly men are tumbling out of a nearby fire truck waving poles and duct tape. But maybe not, as the store is still run by humans, and humans don’t seem to like you.

Though you’re getting terribly weary now. You stop by a newsstand and spot another manhole. It’s far from the one where you started but somehow you sneak your claws beneath the rim and prise off the lid. Slithering back down to the dank tunnel below feels soooo good.

You exhale a deep bellows sigh. What a horrible experience. Better never try that again, no matter how hungry, no matter how nice it was to see the sun. Humans really don’t like you.

C: It seems like the sewer you call home really is the only option. Fortunately there are plenty of nice dank tunnels down here so you wander off in search of yummies. And hello, what’s this? A funny-shaped log with scales floating in the murk? But no, it’s Aunt Agatha, huge and ancient and covered in grime and algae, and she’s nomming a tasty fishy. Actually, she’s not that big really or even that old—your kind used to get so much larger once—but she’s way bigger than you are, and not nearly as friendly.

Yet the fishy smells sooo good. And your belly is rumbling: so very hungry.

What do you want to do? Go to D to try to steal it, though she doubtless won’t give it up so easy.

Or just sigh, go to E and let Aunt Agatha eat in peace. Considering her age, size and foul temper it might be best to leave her be.

D: Aunt Agatha lays in the gloom of the tunnel, nomming the beautiful fat, silvery fishy. Aunt Agatha’s jaws are huge and extra elongated and super warty and still have more than enough teeth; but you’re sooo very hungry. So you sidle towards the cunning old reptile with your most winning smile. Then you make a quick dash forward. You try to seize the fishy in your much smaller jaws. But Aunt Agatha turns. She takes a little sidestep. She smacks you smartly on the snout with her tail. Ouch! Then she swivels and flees into the darkness. The old girl is gone, and so is her dinner. So much for that idea. Go to E.

E: This appears to be a dead end. How boring. It looks kind of familiar too. Surely you’re not going in circles? Never mind, must just keep traipsing along; plenty of fish in the sea. At least, there used to be.

Dinner will turn up soon, surely; something will come along before you suffer the same fate as the American Crocodile.

Go to C, F or H. It doesn’t really matter which. Every choice will bring you to H eventually. But might as well be alphabetical: so go to F.

F: There must be some food along these tunnels somewhere. You’re really getting ravenous now. You’ll eat almost anyone. You mean anything. Erm. Wait, what’s this wooden crate? A label on the side reads: “Certified Environmentally Sustainable.” Something is also scratched there in the old scaly tongue. In the gloom it reads: FISH YUM YUMMY FISHY DINNER AGATHA. (English translation: Aunt Agatha’s personal larder. Claws off.)

Your eyes widen and your belly starts to rumble even louder. But what are you going to do? There must be fish inside, but Aunt Agatha surely wouldn’t be happy if you nommed all her tasty dinners. She’s already in a pretty foul mood, surely.

Go to G if you want to smash the box and tuck in anyway.

Go to H if you are too scared. Aunt Agatha might chomp you into pieces and put you in the crate as well, and you’re far too young to go to the great swamp in the sky.

G: You are so incredibly, insanely hungry by now you seize the wooden crate and throw it into the brick wall where it splinters into several pieces. Tins of Scottish Farmed Salmon roll out, lots of them. How wonderful! You pounce on the nearest can and chomp down on it, ignoring the taste of blood on your tongue as the tin buckles and you cut your mouth on the sharp human-made metal. You can smell the heavenly fish as your enormous mouth waters; you’re almost there. But just as you’re about to chomp down once more, a mighty hissing comes from behind. It’s Aunt Agatha come to check on her hoard. Oh no! She doesn’t look happy. She rushes towards you with jaws open. She’s vast, perhaps twelve feet long, four times your length. The tin clatters to the ground, and you flee as fast as your little legs will carry you. Fortunately you are much nimbler than old Aunt Agatha, so you make your escape, though you are still unbelievably hungry. Your belly aches, it’s so empty. Go to H.

H: Eventually exhaustion overcomes you and you stop running. You’re not so strong anymore, not to mention way too hungry; your beloved sewer is just an endless warren of barren brick. You keep trudging along although it’s starting to smell worse as well. You haven’t been this way for many a year, but you don’t remember it ever being this vile.

You lope around a bend and there it is, the source of the terrible stench: a giant, oozing fatberg. Your jaw drops at the white gloopy mass of human waste, grease and wet wipes that blocks the passage from floor to ceiling. You gag so much you have to stop breathing. Fortunately you can hold your breath for a very long time.

You’ve heard these things exist in other cities but how dreadful to find one in New York. Your heart aches though you’ve never been one to rail against the world; and you no longer have that kind of energy.

No more progress can be made this way. Go back to A.

What are you still doing here? You should be back at A. Yes you’ve run out of sewer to explore but you’re not the type to give up. Keep going, there’s always possibilities.

Yet you are practically starving now. Your legs are so weak they’ll barely lift you; your eyelids droop with weariness. You want to weep great crocodile tears, but you’re not, strictly speaking, a crocodile, so that would be unseemly. Instead you tramp along the tunnels struggling to keep your chin up, belly rumbling.

A hundred years ago, so the old tales said, life was so much easier. Then your kind lived much further south, and basked in the sunlight, and swam in heavenly fish-filled swamps. But those days are only dreams. Just have to make the best of life as it is.

There’s a bright light ahead; all sunshine and blue skies at the end of the tunnel, but it can’t be. You blink your nictitating lids and drag your long little body that’s so heavy now towards the light. At the exit a great stretch of water, dotted with mangrove trees, water lilies and pretty white snowy egrets teems with wonderful fishies. Your eyes go wide. It’s paradise.

You step out into the brilliance and slip into the water. Soon the sun on your back is making your scales tingle. You’re starting to feel strong again. You move to snatch up one of the tasty fishies but then you stop—you’re not hungry. All your life you’ve been hungry. But now the terrible gnawing ache is just a memory, and even that is fading. You’re free at last.

A log floats by. Hollow logs litter the banks all around. Might as well stretch out and bask as your kind were always meant to. This is sooo much better than living in a sewer. You smile—of course you do. You’re always smiling. Except this time it’s from the heart. 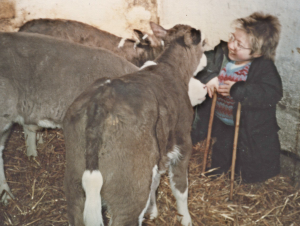 She can be found at: https://ecaimansands.com/ and on Twitter @ECaimanSands (her “serious” author account) and @Daisy_the_Gator (Gator’s account). When a gator, she invariably claims to be a huge one, but she really isn’t, as human Elinor isn’t a very large person, being a dwarf, as you can see from the photo.