In the Florentine hills below Fiesole, where the land is quilted with olive groves and stitched with high stone walls, where every house has dark green shutters and facades of yellow yolk; there lives the rooster of Villa di Notte who crows throughout the day.

Lustily squawking as he struts his stuff, no one understands him apart from the chickens.

‘Hush,’ they coo as he begins to crow. ‘Today he begins the Seventh Circle of Hell.’

It is the rooster’s dream to reach Paradiso; His father only made it as far as Purgatorio.

Sometimes the villa dog comes down to listen; scratching his back on the dry stone wall. He cannot follow what the rooster says (for like most dogs he does not speak Fowl) but he enjoys the camaraderie that comes with each show. Even the olives stop growing when the old rooster crows.

Now this dog is a proud fellow with a thick Shepherd’s mane. Eyes like two toffees: brown, melting stones. His name is Palmerino. He wishes it were not.

‘Oh to be a Leonardo, a Michelangelo, a great Cesare. Anything would be better than such a limp Palmerino.’

‘You should be grateful,’ scolds the plump villa cat. She speaks perfect Hound. She can speak Wild Boar, too.  ‘I am called cat. Nothing fancy about that.’

Sadly, the inhabitants of Villa di Notte do not sense Palmerino’s despair. They think his pout looks like a smile, his grimace just a grin. They think he likes to hear his name. They shout it all the time.

‘Don’t be hurt,’ consoles the cat. ‘They don’t mean to be unkind.  Besides, you know how little they understand about their villa world.’

Palmerino nods at the cat’s prudent words: he knows that she is right. How can they know about his name when they know so little else? Like how their sheep play Blind Man’s Bluff amongst the cypress trees or how their goats enjoy pin-the-tail-on-the-donkey although the donkey is far less keen!

Or how their chickens are so erudite, their rooster so verbose.

And that they have a cat with more tongues than lives and a dog with a lofty dream. A dream that extends far beyond his name — a dream to reach the sky. To stand up high on his own hind legs and walk a steady mile.  To shake the paws of all his friends instead of sniffing bums. Not that he minds the sniffing part (he quite likes it truth be told) but he knows it lacks sophistication; it just isn’t how it’s done.

‘Yes indeed,’ sighs Palmerino to himself. ‘How can they know I need a more gallant name if I am to walk upon my hind?’

As it turns out Palmerino is not the only dog who wishes he stood tall. The dark stone streets are full of such creatures, hankering to drink their morning espressos from tiny porcelain cups or to lean, cross-legged, at Trippa Bars while swallowing down their lunch. Each animal is proud of their Florentine home – of their city’s glorious pedigree. They know of the Renaissance from a time gone by.  They dream of the Renaissance still to come; a rebirth of sorts for all animal kind when the light from their souls will finally shine.  A time when they will at last create.  A time that has not yet come.

They are patient though, these aspiring artists, as they wait for their beautiful day.  For they know how simple human folk really are (despite their invention of algebra) and how dangerous this can be.  Just look what happened to the poor Russian bears that tried to stand before their time; strapped into skates, dressed in pink tutus, condemned to circus life.

No. These Florentine animals will not make this mistake. They are content to wait until the time is right and steal any opportunities that they can.

Like Sunday nights at Bar Café Mingo where they meet to exchange ideas. Owned by a Perugian with a heart spun from silk, he lends his key to a wolfhound called Basso without a single word. He understands that these animals need to meet. Need to express their animal souls. He doesn’t even mind the muddy prints they leave around his cups or that occasionally an enthusiastic tail may break a glass — for so too can a careless arm

Now here in Bar Café Mingo all the animals come to stand upon their hinds. There are the cats who paint with their motley paws and the Arctic Hares who throw clay pots. There are the dogs with a penchant for archeology who bring in their latest digs and the sculpting frogs that spend their days in mud perfecting the animal form. There are the Beatnik goats clapping out their rhythms; the spiders weaving tapestries.  All celebrating together in a small Oltrano bar while the Florentines peacefully sleep.

Palmerino is a regular; he is good friends with Basso, but the villa cat she never comes.  She much prefers to stay at home and enjoy the open air. Besides her father was a rather famous poet who used to cause trouble in the bar. Not for his poems (though somewhat provocative in themselves); he was an alcoholic too. The cat is afraid of what a whiskey and cream might do to her as well.

‘So how was last night?’ she asks Palmerino whenever Monday morning rolls round again.

‘Wonderful. A flock of migrating geese dropped by and honked in a capella Holst’s – Mars, The Bringer of War. Can you imagine? Then they sang a piece which they had composed themselves during their long flight south. Quite spectacular really.’

‘I wish I could have heard it,’ sighs the cat wistfully, resting her head on her well-groomed paws.

‘You really should come to the bar some time.’

The cat shakes her head; the memory of her inebriated father swinging from bar room shutters is still too raw for her.

‘It’s a shame we can’t do something away from the bar. In the open air perhaps.’

‘A festival would need a lot of space.’

‘There’s plenty of room out here.’

The cat shakes her head again. Visions of skating bears flash through her mind. ‘Oh no, the villa folk are kindly people, but they would never understand.’

‘Unless,’ muses the cat with a thump in her tail. ‘Unless we wait until the Dolomites.’

The cat rolls her eyes. Sometimes Palmerino can be very slow.

‘You know when the villa folk go to the Dolomites. They do it every year.’

Palmerino’s tail begins to wag. Of course, the Dolomites! Ever year the villa folk go to the mountains for five days. Normally they take him when they go on holidays but never to the Dolomites. Apparently one of their Aunts is allergic to his fur and she makes a lot of fuss.

‘I shall announce it next Sunday,’ shouts Palmerino in great glee.

The cat raises a paw to the front of his nose.

‘Ssh my excitable friend, not so fast!  At least let me find out first when the Dolomites will be.’

Word spreads quickly about the Festival di Notte and every animal in Florence is cordially invited.  Even the castorino who live down by the Arno and are known for their less than salubrious smell!

‘There is plenty of room,’ Palmerino enthuses to the bar crowd. ‘Olive groves, hay barns, a swimming hole as well. We shall walk, we shall dance, we shall touch the moon with our paws.’

Both he and the villa cat work tirelessly to prepare. They arrange with the pigeons to string up fairy lights; they speak with the mosquitoes about humming Habanera.  A horse chef is invited to whip up delicious treats although she cannot make them by herself as her shoes are far too awkward.  Instead she employs some local rats with nifty, little hands to work as sous chefs in her stable kitchen; to follow what she says. She also invites a herd of local bulls to come toss great salads in the air and a family of squirrels come in to crack nuts and unscrew jam jar lids.

Finally, the day comes when the villa folk are to leave.  Palmerino slumps glumly while they pack their bags – just as any loyal dog should always do!

‘Not too glumly’ hisses the villa cat. ‘They might take you after all.’

Immediately Palmerino starts smiling instead. He trots to the car with a wag in his tail and watches, head tilted, until the car pulls away.

‘Well of course the neutrino can go much faster. I have tested it myself.’

Pigs don party frocks spun by spiders. Chickens count eggs before their laid. The ducks perform Swan Lake to rapturous applause.  Champagne spills over and flutes are broken. They prove too delicate for animal hands.  But the shards are soon melted down and blown into glass jewels by a troupe of fireflies.

By the third night the entire villa is in disarray, but it is a delightful sort of chaos. The lady dogs are wearing waistcoats; the men are in high heels. A fox has come up with a new kind of trot. A frog has learned to jive. The rooster has finally reached Paradiso; he plans to tackle William Shakespeare next.

Palmerino watches with a puffed out chest. He feels so tall he can reach the moon.

‘It’s a success,’ he barks joyously to his fellow host.

‘Aye,’ replies the villa cat who has been learning Scottish from a highland cow.

Suddenly, however, a bright light shines down the road.  Two flying saucers is the first supposition, but alas it is something far more alarming than this. The villa folk. Returning early? Apparently the allergic aunt found a stray dog hair in her soup.

The cat quickly ushers the animals out the back gate while Palmerino slumps frozen in his spot. His head is slung low though his heart is undefeated.

The villa folk cannot believe their eyes. Their house, their garden an unspeakable sight.  Smashed up plant pots everywhere, spilt vats of wine, trodden in food, sagging grape vines. Sculptures made of cow manure. Intricate mosaics designed out of seeds. A woven tapestry of wild, blooming flowers. Remnants of equations scratched out on barn walls.

They search for poor Palmerino with his innocent, brown eyes.

‘Aw come here,’ they say kindly while ruffling his sticky head. ‘Fancy being caught up in such terrible chaos. Such terrible vandalismo! Brave doggy, good doggy let us give you a bath.’

And Palmerino is bathed and groomed and fed though nothing feels as good as standing on hind legs.

The following morning Palmerino wakes from a kaleidoscopic dream and ventures out into the garden. Everything has gone. Nothing remains. In the field burns a giant bonfire, almost touching the sun.

‘Next year Palmerino’ the villa folk say. ‘You will come to the Dolomites with us.’

And Palmerino pouts though they think it’s a grin.

‘O don’t be sad,’ consoles the villa cat. ‘They don’t mean to be unkind. Besides you know how little they understand about their villa world.’ 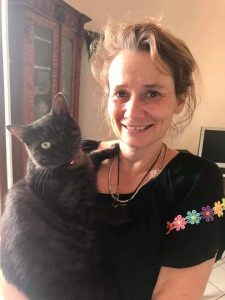 Joanna Galbraith (she/her) was born in Australia but currently lives in Tuscany with her two cats – Pirate and Dalmazio. She has written about singing fish, humming whales, and dancing polar bears as well as the occasional story about vengeful dustbins and eight-fingered snowflake spinners. Her work has been published in numerous publications, including the highly-acclaimed Clockwork Phoenix anthology series.
Comments