At six months, he ate his sister while they were both still inside their mother.

On the eve of his birth, then, he emerged fat and one-eyed, with the scars of his first fight still on his hide. For the sun-loving draks, a night birth was ill-omened. They were a cruel people, but even among them, infant cannibalism was a thing of the dark past. Thus, doubly ill-omened, he was named Moon-Eye, and he became untouchable.

In deep time, the skies dimmed and the world cooled. The draks, creatures of light and heat, weakened and dwindled. For a thousand years the dragon’s children had ruled unchallenged, but a new people had risen in the north, and they brought war to the draks.  For many years, the draks fought a long rearguard action, always retreating to the south. But, clannish and no longer fecund, they were defeated piecemeal, until only Moon-Eye remained.

He was then a drak of something over six hundred years, a lean and battle-hardened veteran. In his youth, he fought many duels over his name, and in the long war against the moles, he had been its most savage proponent. His scaly hide, once bright silver, was now scarred and gray. He haunted the hills, preying on any mole who ventured out alone. He carried a saber crafted in the olden times, when the draks still knew how to forge unbreakable alloys. His name became a fearful legend among the moles. But they were many and increasing, and he was alone.

He went south, seeking legends. The fine mansions of the draks had been pulled down, but here and there he found an isolated tower, or a house hidden in the hills, and he took what he could find. Some of the old books still contained the knowledge he needed. The way led ever farther south, farther than any drak had traveled in his lifetime. But, at last, he found what he sought.

The dragon slept under a mountain.

Time had worn his refuge down like an old tooth, and its approaches were choked with rubble and scrubby trees. Moon-Eye spent three days excavating the entrance. Within, he found a tunnel of dressed stone. He spent another day gathering deadwood to make torches and set off into the interior. In the heart of the earth, far beneath the dead peak, he entered a vast chamber whose extent he could not guess in the blackness. Here the dragon lay prone on a bed of rock, his scaly length seeming endless. Moon-Eye walked all the way around him and then sat down to rest. Then he burned certain herbs he had gathered on the mountainside and said certain words he had read in the old books, and he waited.

It began later, much later, with a creak and a shudder that pulled him out of a dreamless sleep. The ground shivered, and he got to his feet and lit a torch. More time passed. His torch had burned away almost to nothing when the voice came out of the darkness: a huge, ancient thing, as if the mountain itself were speaking.

“What’s this? A starved lizard?”

He raised the torch over his head. Far above, he saw a face looking down. The dragon’s eyes gleamed like liquid fire.

Moon-Eye drew himself up to his full eight feet. “I am Moon-Eye.”

The dragon blew out a contemptuous breath, and Moon-Eye was buffeted by a sooty wind.

“In my day, children were taller. Why have you wakened me? I was dreaming good dreams of fire and brimstone…”

“Your Bat-Winged Eminence, there is trouble.”

And Moon-Eye told the dragon of the centuries that had passed, of the dimming of the skies and the decline of the draks. And he told him of the moles.

“Hmmm,” said the dragon, and fell silent. He had lowered his head to rest on his great forepaws and closed his eyes. Again, Moon-Eye waited. After a time, the golden eyes reopened and fixed on him.

“I have searched far in my mind,” said the dragon. “You do not lie. My brothers and sisters are silent, my children are no more, and there is mischief afoot in the world. You did well to waken me, little one. Now bow your head.” The dragon touched him on the brow with a black talon like a scimitar. “See now, as I do! With the all-seeing gaze of your mind, and not your feeble senses. You are half-blind from birth, but now when your eye falls on the enemy, it will be as if you strike him with your sword…”

The death gaze, thought Moon-Eye. He had heard stories of such things existing in the distant past. He had thought them all lies.

“Go back to the surface and await me there,” said the dragon.

The following day the ground shook and there was a great crash, as of huge stones shifting, and the dragon emerged from his rocky lair to perch on the mountainside. When he spread his wings, there came a vast creaking sound, like the wind in a forest of great trees.

“It is well,” he said, flexing his pinions. “They will still carry me. Now, I will see about these moles. I will turn over their cities like anthills and dig them out of the ground. Then I will burn everything to a cinder. This world belonged to me, once. The moles will learn to fear me.” He laughed, a sound that caused Moon-Eye’s head to ache. “Now, it is beneath my dignity to crawl over the earth like a snake, but follow me as best you can, little one, and you shall have your vengeance.”

The wind from those great wings knocked Moon-Eye down and flattened him against the stony ground. When he was able to look up, the dragon was a dot in the sky, arrowing away to the north.

He climbed to his feet and began walking. 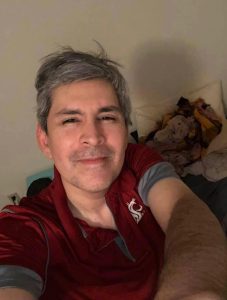 Garick Cooke is a California native but a longtime resident of Houston, Texas, where he attended the University of Houston on a full scholarship, studying Biology and History. He has worked construction estimator for over 20 years. He has four dogs and enjoys writing science-fiction and fantasy in his spare time. He has previously self-published an anthology entitled Similia, but “Moon-Eye” is his first professional sale.
Comments