by A Humphrey Lanham

With a soft clunk, the toaster landed on a sandy bluff overlooking the ocean. It flicked its pterodactyl wings just so, making the leathery membrane almost shimmer in the fading sunlight. It wiggled its toaster toes in the sand and sighed.

It was a lonely little toaster. The only one of its kind. No one wanted it around. Humans screamed and threw things. Dogs barked. Wildlife fled. The other toasters gave it the silent treatment. (They were inanimate after all.) All the little toaster could do was travel the continent in search of a place to call home.

As the light faded, the toaster tucked its wings into their bread cavities, preparing for sleep. The little toaster sat on the bluff watching the sun slowly slip into the ocean, the sky fading from blue to pink to dusky black. The lights from ships blinking in the ocean were met by the twinkling of stars in the sky. The cacophony of the ocean waves and rustling crab grass sang to the little toaster in the otherwise silent, lonely world. It would always be sad and hopelessly alone.

The toaster made a bed in the sand and fell asleep counting the stars.

A collection of seagulls woke the sentient toaster, pecking at its metal exterior and picking at the two metal prongs of its black cord tail. It alternated yelling toaster profanities and pleas for mercy to no avail. The toaster retracted its wings as far as they could go into their bread cavities and tucked its tail as best it could underneath itself in the sand, waiting for the flying saltwater rats to lose interest.

The attack eventually subsided, and the toaster lay, shaking with fear.

What purpose was there for a sentient toaster with pterodactyl wings? None. None was the answer it had known and been avoiding all its life. It didn’t know how it had come to be, but it had always and would always be alone.

The toaster rose, shook itself, feeling the grit of sand that had worked its way into every crevice. It lifted off the bluff and flew towards the ocean, struggling with all its might against the wind currents headed for shore.

The toaster flapped and fought and pushed against the wind like never before, its tail whipping like a kite’s. It didn’t try to gain sufficient height to surf the currents. It just needed to get far enough over the water for a sufficient drowning.

At last, fatigued by the effort, satisfied with the distance from shore, the toaster tucked its wings into their bread cavities and dove. It could not gain the aerodynamic speed of a peregrine falcon, but for the duration of its plummet, it felt a panicked sense of freedom, its tail fluttering loose behind it.

It hit the water with a splash. It sank like, well…like a hunk of metal.

The toaster did not cease to be. Instead it rested on the sea floor, tail tangled in a kelp bed, surrounded by inanimate bits of trash. Its pterodactyl wings were near useless in the water, so it kept them furled and protected.

All in all, the toaster had naught to do but watch the world pass it by. Here, helpless in the kelp bed, it found a sense of calm.

On the second day, a tiny octopus came by and attempted to use one of the bread cavities as a den, but upon realizing her new hiding spot was sentient, she moved on, ignorant of the toaster’s request that she stay.

On the third day, however, a pod of dolphins and a barge came. The dolphins swam from the barge to the ocean floor and back again with pieces of trash in their mouths.

Eventually, one of the dolphins made her way over to the toaster’s kelp bed and began removing the trash one piece at a time. Finally, it was the toaster’s turn. The dolphin examined the toaster, grabbed onto it as best she could, and pulled. After a few firm tugs, the toaster detached from the kelp, leaving behind its beautiful black cord tail with two metal prongs. The little toaster shed a toaster tear, watching the tail waving goodbye in the ocean currents.

Human hands grabbed the toaster and lifted it from the mouth of the dolphin, giving the cetacean savior a piece of fish in exchange. The dolphin winked as it swallowed its reward and disappeared below the water. The human tossed the toaster onto the barge without a second thought.

The little toaster rested, keeping its wings tucked into their cavities as more and more trash was thrown on the pile. It wanted to not draw attention to itself, tailless, and unsure if it would be able to escape. While it did not seem to hurt being tailless, the toaster mourned the loss.

As the day shifted into evening, the barge returned to a place of rest. When the voices of the humans grew faint, the little toaster wiggled its way out of the trash. It stretched out its wings and did a test flight to the top of the pile to look around. It was in some kind of water paddock, separated from the ocean by two jetties made of rock, and enclosed with a gate.

One of the dolphins–perhaps the one who had rescued the toaster–swam over and whistled at it. A friendly, knowing sound.

The toaster unfurled its wings, thinking the movement would scare the dolphin, like it did most creatures. But she remained, clicking and whistling and staring at her own grey reflection in the toaster’s smooth silver plating. In response, the little toaster toggled its lever, clicked it into place, and released it again with a squeak. This seemed to please the dolphin, who signaled to the rest of the pod, which swam over to investigate.

Delighted to find something in the world that did not fear it, the toaster took to the air and made a wobbled pass over the pod of dolphins. Flying would be more difficult, though not impossible without its black cord tail with two metal prongs. The toaster made several awkward loops around the paddock, the dolphins swimming after it, before landing again on the barge.

The toaster made a gleeful little squeak with its lever. Its pod whistled in joyous response. 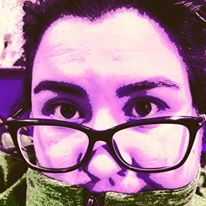 A Humphrey Lanham is a science fiction, fantasy, and horror writer in Oregon. They graduated from Odyssey in 2019 and are a member of the Wordos Workshop. When not writing, they like to make kombucha, procrastinate, and study secondary languages. Ru, their housemate, is an anthroxenobiologist, studying humans and their strange, hydrophilic proclivities. Sadly, everyone else insists he is just a common terran cat. Follow their adventures on Twitter @ahumphreylanham.