The sun sets behind the row of giant pines as I watch my manta ray son circle slowly near the bottom of the pool. I hunch at the edge, arms wrapped around my belly, like I’m bleeding from a hidden wound. I track my son’s smooth glide, intent on soaking up every inch of his dark bat-shaped body.

Last year when he was still wholly human, he darted about, dodging sharp corners by a hair, artfully prat-falling. I would put my nose in the crown of his tousled head, and savor his smell. Now I can’t tell his scent from a bucket of chum. I can only sit half-in, half-out of the pool for so long my skin never unpuckers, stinging from saltwater sores. I wait for him to circle past, reaching out to rub his velvet black head. I try to catch the silky tip of a wing as he glides by.

My husband came out earlier, to talk. He’s worried about our daughter, who’s gotten so skittish and wary, wanting to hole up in her room, burrow beneath her bed. I told him it’s the fox in her. A month ago she woke up with paws and a fluffy red tail. He thinks I’m neglecting her. Maybe I am, but she’s still mostly human and our son is not.

My husband has hired a special truck with a lift and a water tank to take our son to the ocean. This time tomorrow he’ll be gone.

The light just went off in our bedroom.

I have one more night to beg the Earth, in all its infinite wisdom, to change my son back.

So far the animal mutations affect children on the cusp of puberty. Overnight their extremities change to that of a threatened species. In California, it’s mostly bear, mountain lion, wolf, elk, and large marine animals, like sea elephants. A family from our elementary school was on an African safari. Their four children woke with the respective tails of a hyena, lion, elephant, the last with the antlers of an impala. They never came home.

Some of us tried plastic surgery, but the animal parts grew back.

We got used to the changes. There was even talk of restarting school. Some of the parents began to feel a kind of pride, like the mother of a boy with a bristly curly tail and tusks jutting from his jaw, going on about how smart wild pigs were.

Then the children transformed completely.

Governments passed sweeping wildlife reforms all over the world. The children needed clean habitats, unthreatened by humans. No more slaughter for trophies to hang on walls or poaching for superstitious cures. No more hunting at all. We are not animals who eat our young.

I suppose you think it all worked out for the best. The Earth setting itself right, putting balance back into the ecosystem.

To you and your beloved Earth I say this. May you stew in pollution. May you wheeze on carbon emissions and choke on the mountain of plastic in the oceans.

I don’t mean it. Please bring my son back.

The next morning I wake up next to my husband, staring at his back without blinking, gasping for breath through slits on my neck. The pillow’s silky with fallen-out hair.

I’m mute so I take care to bite him gently, then lick at the bead of blood. There’s a sudden rustling as he turns over, then a great upheaval, with sheets flying as he jumps out of bed, eyes bulging, mouth O-shaped.

There’s a fin sticking out of my back. I’ve seen those awful videos of sharks hauled up on the decks of boats. Their dorsals cut off; their mutilated bodies tossed back to die. I feel a rush of excitement. My change is only fair. It’s part of setting things right.

My husband huddles in a corner with hands on his face, his shoulders heaving.

Maybe I’ll become a megalodon, the biggest shark that ever lived. That would be cool, but I don’t think it works that way, since the megalodons were extinct before humans existed. Another big predator then–a tiger or a mako. Something sleek and fast, but without the cinematic baggage of a great white.

Maybe I can have sex with my husband one last time but no, only a shark’s clasper is fitting in there. I could make pancakes for him and our daughter one last time, but I don’t have all the ingredients and I’m not up for a trip to the grocery store.

He’s calm now. He’s come back to the bed, stroking my head softly. Soon he’ll carry me to the pool. When the time comes, he’ll ride in the truck that will take me and our son to the ocean. His lips will tickle the tough gray skin where my ears used to be, saying goodbye.

He’s a good father, and he’ll take care of our vulpine daughter, until the day she scampers away into the brush.

He’s losing his family, but I don’t think he is lost. The Earth loves all its animals right down to the microbes. Even the humans. She’ll keep some of them around, in the right amount.

Still, a part of me is sorry that he’s human through and through.

This is how the Earth answers me. Maybe it’s what I wanted all along–to drift into the ocean with my manta ray son. With a wave of his wings, he’ll glide away, disappearing in the darkness.

Then I’ll go too, racing after the scent of some wounded creature, following the spilled blood.

Originally published in Fantastic Stories of the Imagination 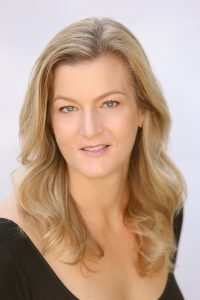 K. A. Rochnik is a speculative fiction writer based in the San Francisco Bay Area. She writes science fiction novels and a wide range of short stories. Her stories have been published in Fantastic Stories of the Imagination, Strange California, NewMyths.com, EGM, and Frostfire Worlds. She is a graduate of the Odyssey Writing Workshop. She dedicates this story to her amazing golden retriever, Lexa!