No one gave it a second thought. Lots of people attend Open House events for the free cookies or wine, or maybe just to admire a stranger’s shiplap and crown molding, bathroom mirrors in the shapes of seashells. No, the neighborhood didn’t begin to worry until a few days later when the zippy little realtor came out of the house smiling at the horse and the horse nodding back at him.

What does a horse want with the house on the corner? It normally wouldn’t be a big deal except that more than a few people in the neighborhood are allergic to hay and the horse’s (truly exceptional) diamond shoes keep cracking the sidewalk.

“Her head weighs the same as my entire brother!” the Lightfoot’s girl was heard whispering to another. The neighborhood children are mystified by all the new horse-facts they’re learning now. (It never really occurred to them to look up horse stuff before.) How much does a horse heart weigh? How much do horses poop? Has a horse ever been to outer-space? How many lungs do horses have? Are horses good at keeping secrets?

They begin to wonder if the horse might be keeping secrets.

Spying children must be startled off the horse’s porch like birds nearly every day now. The clever ones have started throwing toys over the horse’s fence for the excuse to climb into her yard and fetch them.

Scaling her fence, the children look in upon the lushest garden: all kinds of lettuces, lumpy rainbow tomatoes, an apple tree dotted with tiny red and yellow apples, strange herbs with sticky leaves, and a long row of—one of the Robertson girls calls it right away, probably thanks to all those Girl Empowerment camps where they learn about medicinal plants and old myths and—rampion. “It’s also known as Rapunzel,” she explains with some importance.

They try to remember how long the horse’s mane is, if they could use it to climb a tower. They begin to wonder if a horse can also be a witch. (Perhaps this is one of her secrets.)

The children hush each other as they explore the horse’s garden, smelling its savory muds and fruits, looking for things to steal. Instead they find themselves wondering where all these other trees came from and what about those rain-slicked boulders and how long have they been walking?

As you might imagine, the neighborhood parents want to know what’s become of their children.

“Where did you leave them?” the horse replies. “Next time try stacking them like the books at the library. Alphabetical order is so reassuring, don’t you think? Like a smile full of strong, healthy teeth.”

The horse bares her great teeth in example, but it isn’t at all reassuring to the parents.

The parents wander the neighborhood that’s suddenly empty of their children, the planned and unplanned offspring they built their lives around. They can’t remember their own Open Houses or why they settled here. They weren’t trained for this. They weren’t prepared to think of themselves as their own future.

The children age as they venture deeper into the horse’s garden, deeper and deeper until they come out the other side and discover themselves on the moon.

“This sure isn’t Kansas,” they joke, turning in circles. They’re as tall as adults now, muscled and boobed and hairy. They hold hands, they kiss. They smell like old bedsheets.

Examining their dusty path, they realize the moon’s craters aren’t craters at all but ancient hoofprints.

It never occurred to them to wonder where horses came from before Earth, nor what it might be like to live on the moon. Will they need special shoes? Will they meet many astronauts? When did the horses first leave the moon, and has it always been this lovely? Its shadows so deep and gentle? Its dirt so soft and cool?

They begin to wonder if they might have secret knowledge of their own now, to find so much promise in a world that others have left for dead. 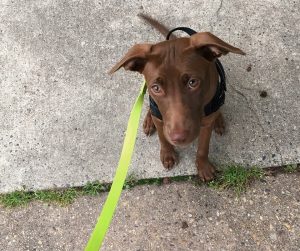 K.C. Mead-Brewer lives in Ithaca, NY. Her fiction appears in Electric Literature’s Recommended Reading, Joyland Magazine, Strange Horizons, and elsewhere. She is a graduate of Tin House’s 2018 Winter Workshop for Short Fiction and of the 2018 Clarion Science Fiction & Fantasy Writers’ Workshop. For more information, visit kcmeadbrewer.com and follow her @meadwriter.