This is the story of Purple and Green, two hedgehogs who were the best of friends. They rolled and played on the forest floor. The hedgehogs were spiny and guarded, but they knew how to reach each other. They feasted on berries and mushrooms, bright frogs and luminous snails, while they told each other the funniest and saddest and strangest stories they could think of. Some were stories they’d read in books, while others were anecdotes they’d heard from other hedgehogs or happenings from their own lives. Even calamities that had befallen them became fodder for their stories, offered up for each other’s enjoyment.

Then one morning, Purple found that Green had turned into a pine cone, armored and inanimate. Purple butted her head against Green, but instead of giggling or waddling in a circle or poking Purple with her snout, she wobbled and grew still once more. “Green, please speak to me,” Purple implored. “How did this happen? Did you will it so, or was it done to you? Are you under a spell?” Green didn’t reply. Purple couldn’t tell if Green had a heartbeat anymore, or a heart.

Purple sat with Green for a long time, waiting for the pine cone to come back to life. She told Green funny stories, but the pine cone didn’t laugh. She brought Green mushrooms and berries and the very best snails she could find and laid them where her feet used to be, but the pine cone made no move to eat them. Green’s silence and stillness became unbearable. Purple pushed Green hard with her paws and cried, “What is the matter with you?” Green wobbled, then grew motionless. Purple let out a snarl that turned into a sob.

At last Purple turned to walk away, but she turned back again and again, hoping Green would make some move to stop her. The pine cone didn’t seem to care. Green made no sign that she even noticed as Purple trudged away.

Purple wandered disconsolate through the forest, the vibrant green all around only reminding the hedgehog of her lost and silent friend. Birds chittered and sang arpeggios to each other. She was silent and alone, her eyes heavy with tears. Then an owl swooped down and tried to catch her in its talons, and Purple roused herself from her sorrow and ran as fast as she could. She crouched shivering and miserable under a thorny shrub until the owl winged away, hooting imperiously. The hedgehog worried that the owl might find Green, but she wasn’t near enough to warn her. Purple hoped that at least as a pine cone, Green would be safe from the owl’s predations.

The hedgehog crawled out from beneath the shrub and looked around. She had reached an unfamiliar part of the forest. Instead of leaves and fruit, the trees all sprouted books. Some of the trees, especially the smaller, younger ones, were sparsely leaved with volumes. The more massive trees were loaded with them.

Many books had fallen onto the ground. Beneath the larger trees, the forest floor was carpeted with volumes. Purple glanced at their covers as she walked over the books. Morocco leather bindings mingled with lurid paperback covers. She idly riffled the pages of one book after another. Some books appeared pristine, while others seemed to have been well-thumbed, even underlined and annotated. She wasn’t sure if these had been read on the ground or if intrepid readers had climbed trees to peruse them. She thought some of the books might contain stories that Green would enjoy, and then she remembered her loss afresh and began to cry. Her tears fell onto the book covers, and she dried them with her paws the best she could.

One book drew Purple’s attention. It was a paperback with green leaves and purple flowers on the cover. The hedgehog nosed it open. There were no dog-eared pages, no underlines or annotations. Purple climbed inside and pulled the pages shut. She wandered the forest of letters, black trees against an off-white sky. The words sheltered the hedgehog against the pine cone’s silence. Purple called Green’s name, and it echoed off the page.

The book held the hedgehog in its paper embrace, enveloped her in its clean and slightly musty smell. It rocked her to sleep. Stories sidled through her dreams, and she thought Green might be there too, flitting among the tales. First there was the story of a mother’s deep, winter-causing grief when her daughter was stolen away to the underworld; when the daughter returned, her mother’s rejoicings brought spring to the land. Next was the story of a lover transformed into a snake, then a fire, then a lion—biting and singeing his beloved as she held on—until at last, due to her determination, he turned back into himself, and not a wordless, eyeless tree.

Purple already knew these two stories, but the third was new to her. It was the tale of an inveterate reader who died before he could read the last chapters of a gripping novel and who spent his afterlife amid the book’s characters and situations, trying to figure out how it ended. He tried out tragic endings and happy ones, endings improbable and rote, until at last he happened upon the perfect ending, both unexpected and inevitable, and he was able to rest satisfied.

When Purple woke, she wandered deeper into the maze of words, towards the book’s heart, her own heart, the world’s heart. Green was part of that, whether the pine cone knew it or not. Purple became convinced that Green did still have a heart, whether or not she had a heartbeat. The book-forest was dotted with the small shrubs of the and and and but, the great towering trees of circumstance and loyalty, the bright flame-like flowers of grief and surprise. The words were beacons. The words were companions. The words were heartbeats, urging Purple on.

She kept thinking about the final story in her dream. She thought that Green would like that story, about the reader trying to find the ending to the book. I believe that Green is still alive, Purple thought. Even if she is silent and still, we are still alive, and our story may continue if I don’t give up.

At last the hedgehog came to a clearing and saw Green. Was she still a pine cone? Purple moved closer. Green stood alone in the empty space between one chapter and the next. Her spines—was Purple imagining?—no, it was true, her spines quivered ever so slightly. Green was a hedgehog again! She looked up at Purple. Something about Green’s eyes made Purple hang back, but all of Purple’s words rushed forth to say themselves. She told Green about the owl, and the forest of books, and the three stories. “But nothing seems real unless I can tell you about it,” Purple said. “Green, can you hear me? Are you yourself again?”

For a long moment she feared it was all for naught. Then Green waddled closer to her. “Yes, Purple, I can hear you,” she said, “and I am myself again, my friend.” She told Purple the story of her imprisonment in the form of a pine cone, able to hear but not reply, able to see her friend and the forest around her, but unable to be a part of any of it. She said she had turned into a pine cone twice in the past, before they became friends.

“Why didn’t you tell me?” Purple asked.

“It was the one story I could never bring myself to tell you,” Green said. “I hoped it would never happen again. When it did, I heard you trying to reach me. I wanted to tell you not to go, but I couldn’t. It was a kind of death in life. Finally the spell ended, and I looked everywhere for you. I feared that you had given up on me and gone so far away that I would never find you.”

“I would never do that,” Purple said, reproaching herself for running from Green when her friend had needed her most.

“At last I came to the forest of books,” Green said. “I found this paperback and climbed inside. I got lost amid the shrubs of the and and and but, the great towering trees of circumstance and loyalty, and the bright flame-like flowers of grief and surprise. Finally I came to this empty space between chapters to rest, and you found me.”

Purple wept for joy. Her happiness was so intense, she felt it could bring spring to the land. Together the hedgehogs made their way out of the book and found their way home. After that, they frequently visited the forest of books, where they met other readers who ventured there. Purple and Green combed through many volumes on the forest floor in search of the most beautiful stories to share with one another. And when, in the course of time, Green became a pine cone again, Purple stayed by her side and told her stories as she waited for her friend to return to her once more. 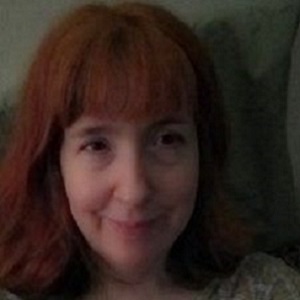 Gwynne Garfinkle lives in Los Angeles. Her collection of short fiction and poetry, People Change, was published in 2018 by Aqueduct Press. Her work has appeared in such publications as Strange Horizons, Uncanny, Apex, Through the Gate, Dreams & Nightmares, Not One of Us, and The Cascadia Subduction Zone.