Ashmoda flew through thirsty air. Her sky-blue scales itched but were impossible to scratch. Sands flowed beneath her wings like a dead sea, the surface broken by scales of sapphire, mossy green, and red like dried blood.

“Water arrives late,” Taniver said, his words weighted. He had quartz-colored scales, and horns crowned his skull, cascading from spine to tail. A fiercer look than the webbed crests of her own clan.

“The wind is impatient,” Ashmoda said.

Taniver stared. It was intimate, stirring old memories. A scar lined his right cheek. The mark was talon-made. Ashmoda had attacked any male foolish enough to advance since her hatchling’s death. Her old mate was no exception.

“We should be hunting Songless filth,” Ashmoda said. “Instead we tremble in this sad excuse of a nest, our talons clenching its sand for fear it will slide out beneath us.”

Taniver pinned his ears. “They outnumber us.”

“Who cares how many ants spill from the hill?” Ashmoda said, hissing back. “They are a prey-born race. They’ve abandoned their dens of stone and wood to chase us.” Her words tumbled, wet and rushed. “Now’s our chance.”

“The Songless are a hive-like herd,” Taniver said. “Cut one down and twenty more appear.” His lips curled back to reveal hunting teeth yellowed with time. “Let the fires die out on their own. The Songless–”

“–murdered our hatchling, the first of our nest!” Ashmoda turned her back. Her feet carried her to an open spot among blue-scaled kin. She circled, then settled down. Nearby, a hatchling peeked out behind his dam’s tail. His eyes spoke of hunger.

If the clans wouldn’t fight, so be it. She would hunt her prey alone.

Ashmoda woke to precious dew collected atop her scales. She licked them, trying to abate her never-ending itch. Without a word, she stretched her wings and took off.

The desolate sands were replaced by a canyon. Sparse growth turned to a green tide. Trees swelled, filled with the scents of pine needles and cedar and the stench of her enemies.

She met them in a blur of fangs and hate, using the Song of Water to gather clouds before releasing them from her throat. A flood rained down and nipped their heels, herding them. There was a flock of thirty, maybe more. They ran on two legs, their soft flesh covered with dried animal skin.

She forced them to the canyon’s edge where stubborn tree roots clung against sheer, jagged boulders. A headwind tickled Ashmoda’s snout, slowing her, helping her clear the dense tree line. She searched the skies and saw familiar eyes.

The Song of Wind pinned the Songless to the canyon’s mouth. They bent their knees, rooting themselves. When Taniver took a breath, his song quieted, and sharp-toothed arrows filled the air. Several sunk between her scale rifts. She hissed, then banked, gaining speed. She renewed the Song of Water, eager to wash away the filth. Let their mothers know her emptiness.

Taniver kept close, a roar in his throat. His tail snapped limbs of trees and Songless alike with satisfying cracks.

A deep cut wept across his breastbone, the wet blood glinting black. She led Taniver to higher altitude, through the cloud line. The wind danced to the rise and fall of his wings.

“We must flee,” he said, his wound fresh and terrible.

Ashmoda growled. She was no cowardly prey to bolt like a frightened deer. “Filthy egg-smashers!”

“Come away,” Taniver said, trying to soothe. “Ride the wind with me.” He rested a rough cheek against hers.

How could he talk of defeat? She bared her fangs. “Enough!” Ashmoda lashed out with her talons.

Her old mate flinched, then left.

She remembered their hatchling even if he didn’t, so small it hadn’t been blessed with a name. She closed her eyes as Taniver’s wingbeats grew distant, then silent. Her heart tingled, growing chill, numbing her weariness.

Below, the Songless ignored the skies. They were drunk on victory, yelping with excitement, encircling the leader of their herd. His hatchling stood beside him, almost full-grown, raven-maned like his sire and grandsire. The creature held his shoulders back, and his bare face rested in a permanent smirk. She knew his smell of rancid meat well, for the Songless hatchling had claimed the life of her beloved. A wingless, two-legged filth.

The Songless had stolen the future of the clans. She would do the same to this sole hatchling of an aging sire. A fitting exchange of ends.

The wind whistled by, faster and faster. There was no need to flap her wings in such a plunge. She counted on that. The Songless still squawked which provided an effective cover. Her talons circled the hatchling’s chest before he realized the danger. Her clan wasn’t the largest in size nor the strongest, but they were swift. It had its uses. She lifted, straining her shoulders and back, forcing compliance from her fatigued wings.

The Songless hollered like injured animals. More sharp-toothed arrows tasted the scales on her underside. Ashmoda cringed at their bite.

Frosted water poured from her snout and gaping jawbone. It turned to ice. The change in her song startled her, at first, but she lost herself to it. Ashmoda cleared the ground with her prize tucked safely against her belly. He would die, but first, she would teach him hunger and pain.

Shouts and fast footfalls and many sharp-toothed arrows warned of pursuit. 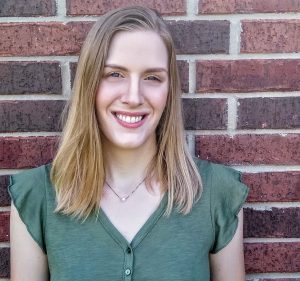 Anna Madden lives in Fort Worth, Texas. Her fiction has appeared in DreamForge Magazine and Upon a Once Time (anthology, Air and Nothingness Press). In free time, she gardens, mountain bikes, and is a first reader for DreamForge Magazine and Dark Matter Magazine. To learn more, follow her on Twitter @anna_madden_ or visit her website at annamadden.com.