Harold was mostly a fish.

Most days, at most times, he liked being a fish. Moving through layers of cool and warm, diving after drifting bits of this and that, spreading his milt over the sandy bottom.

But there were times when he longed to stretch his fins beyond what nature seemed to intend, sprout feathers, and soar into the clouds.

His fish friends both admired and avoided him for his strange habit of cultivating bird friendships. Susan, too, would sometimes chat with the birds — in particular a patchy pelican with the odd quirk of diving into the water for hours at a time. But, muttered the other fish behind their fins, there was no explaining Susan.

The birds tolerated Harold’s fascination, chatting with him about their wings and preening, their molting and the difficulties of egg-laying. When he discussed his own egg experiences, they’d cluck and explain it just wasn’t the same.

Harold spent most of his time at the top of the water — not quite in, not quite out. The blue sky, dotted with peaceful puffy clouds, would call to him and he’d leap, spreading his fins in the wind. For one blissful moment, Harold would fly.

And yet, when the water welcomed him once more into its cold, familiar embrace, it wasn’t wrong. It wasn’t uncomfortable. It was where he was meant to be, after all. All-encompassing, the water surrounded him with an ease the air simply couldn’t offer.

Harold lived with his discomfort the way some fish lived with a hook in their jaw. It was always there, but eventually one becomes accustomed. It becomes an accessory of sorts.

“If only,” Harold thought, “if only it were as bronzed and pointy as a hook in my jaw.”

But Harold’s hook was as invisible as the feathers he could not quite feel on his tail.

Then one day, Susan declared she wasn’t a fish at all.

“Not a fish?” the other fish cried. “Look at you. Of course you’re a fish. You have scales and lidless eyes and transparent fins. What else could you be?”

“I’m a bird,” Susan said simply, and swam to the surface.

They waited for her to return, but Susan and the pelican had departed for parts unknown, Susan ensconced safely in the pelican’s pouch, whistling in a way that was reminiscent of, but not quite, birdsong.

“Well,” said the other fish, a knowing look in their spherical eyes, “there’s no explaining Susan.”

Harold took to swimming in the shadow of the birds, mimicking their movements. Though he couldn’t close his eyes, he did everything in his power to shut off his brain, a bird in the wind.

He admired Susan, wondered if after all she had the right of it and he should cultivate a closeness with a pelican of his own. Then again, no. Harold was mostly a fish, after all, and most days, at most times, he liked being a fish.

Harold misjudged a likely-looking bit of breakfast. The line tangled in his fins, and the hook snagged into his jaw. Burning pain arched his back. He flailed back and forth. The line tautened and Harold flew, flew into the air, soaring over the water. The boat drew him in. He should have stayed deeper down, but the sky had called to him, and this was his due.

The water spread below for miles and miles, silver and white and blue. Waves crested and dove back into the world he’d known for so long. Wind cooled the water on his scales. His fins rippled, almost catching, lifting him. He arced over the depths, and it didn’t matter that he was going to land in the boat because for this one perfect moment, Harold flew.

Harold twisted. The hook slid free. He slapped, splashed, belly-flopped back into the water, cocooned by the salty safeness. Harold wiggled into the darker waters, then turned, considering the watery blue.

Both air and water had their upsides, he decided — and their downsides. The ocean had sharks and otters, after all, and not all pelicans were as friendly as Susan’s. Harold was mostly a fish, but sometimes he wasn’t. He didn’t have to choose. 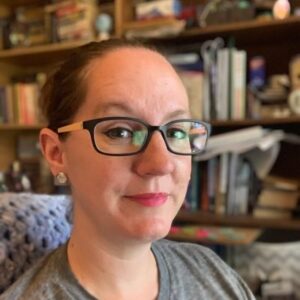 Rebecca E. Treasure grew up reading science fiction and fantasy in the foothills of the Rocky Mountains. After grad school, she began writing fiction. Rebecca has lived many places, including the Gulf Coast of Mississippi and Tokyo, Japan. She currently resides in Texas Hill Country with her husband, where she juggles two children, two corgis, a violin studio, and writing. She only drops the children occasionally.

Rebecca’s short fiction has been published by or is forthcoming from WordFire Press, Air & Nothingness Press, Flame Tree Publishing, The Dread Machine, and others. She is an Associate Editor at Apex Book Company and Magazine.