My first intimation of existence came as barometric pressure lowered, and I leisurely began to form a spiral in the wind, stirring long prairie grass with ephemeral fingers. I could sense vibrations on the air—vibrations I would later come to know as words—and those vibrations shaped me. Controlled me—or sought to. The greater my power grew, the more I became inclined to resist those words. Soon I towered over the landscape, my voice a roar as I fought the sounds, the shapes, the meanings that sought to trammel me. I wrenched dirt up out of the ground, split buildings asunder, screamed my rage to the sky.

And then the words rose again, louder, more commanding, and compelled me. Compressed me down from a form of pure air into a solid form. Four legs, a head, a tail. I snorted and stomped the ground with my new-formed hooves, flinching and shying away from the touch of human hands against my new-forged flesh. A bridle slid over my head, an iron bit found its way between my teeth, and the voice that had summoned and shaped me whispered a name in my ear: “Tornado.”

I tested her will every time she slipped onto my back. I bucked, I reared, I tried to resume my true form, the black storm of the sky, the finger of god in the heavens, and all she ever did was hold on tighter, leaning forward to whisper words in my ear. Words like invaders and defense and lives depend and hopeless without you, but the words were meaningless to me then. What’s an invader to the wind and sky, after all? Do birds fight wars?

Yet I welcomed battle, an outlet for my rage, and lightning sprang from my hooves as we rode. Siroccos formed in my wake, tearing at grass and splintering trees, and my teeth scored the necks and flanks of other, lesser beasts. Even as I galloped, thunder in my steps, she leveled her pistol and fired thunder of another sort as we raced past the enemy, outflanking them again and again with my speed.

I wasn’t sure when I became a we. When I could no longer imagine horse-self without her on my back, scratching my flanks, grooming me after a long day’s ride. When a day ending without a gift of sugar or an apple became unimaginable. Perhaps it was when she left off the bit and bridle, and simply leaned in against my neck, hands stroking. When she whispered of sorrow and loss, regret and hope. When she spoke the name she’d given me, and her voice held love.

The thought of becoming storm-self again felt lonely—the more so when I realized that even storm-self was doomed to fade back into the upper air, and that my existence, my organized ability to think, to feel, to know…  would cease as I became a calm eddy among the clouds once more.

I had her to thank for the mere fact of my existence.

Somewhere in that shift from me to we, there was another battle. It shouldn’t have been any more important than any of the others we’d fought. Cannons roared, but they couldn’t outmatch the thunder of my neigh; we darted between the clouds of shrapnel they cast from their hot cans, charging at the enemy. But that was when I heard other words. Words of bidding and unbinding, untwisting, untrammeling.

I clung to horse-self, flesh-self, with all the power at my disposal. Sweat foamed along my flanks, white against black. I couldn’t warn her. I couldn’t speak in words, only in signs. So I rocked to a halt, standing firm yet shivering, refusing to go another step closer to the foe.

A gentle hand, smoothing from fetlock to shoulder. Soft words. “What’s the matter? What do you sense?”

And then horse-self, flesh-self disintegrated. I tried to hold myself together, as much for her sake as for my own—but I rose once more, a towering pillar of destruction. The enemy’s voice whispered in my ears, Kill her. Destroy those who enslaved you. Unleash yourself!

And for a moment, a terrible moment, I was tempted. Storm-self knew no love. Storm-self only knew that it had been bound, and now was unbound.

But the tiniest part of me remained that was still a we. And that part took control of all my wind and rage, and drove me into the enemy’s massed ranks, throwing them all along my length, spinning men and horses and cannons up into the sky and then spitting them back out again.

Words, frantic and trembling in the air, as ephemeral as magnolia blossoms, trying to bind me. Control me. The enemy’s wizard seeking to harness me as she’d once bridled me. But I knew more this time, was cannier, and I found him as his voice hovered on the air. Caught him in my embrace, wringing him with pressure and slashing him with the teeth of my winds as I’d once slashed the necks and flanks of enemy horses.

So when words once again vibrated in the air, and I recognized her voice, I didn’t resist. And becoming enfleshed once more was the sweetest thing I’d ever known, and might ever know. 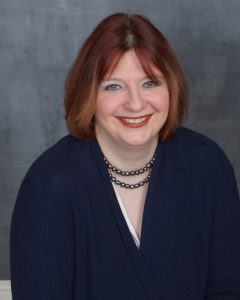 Deborah L. Davitt was raised in Nevada, but currently lives in Houston, Texas with her husband and son. Her poetry has received Rhysling, Dwarf Star, and Pushcart nominations and has appeared in over fifty journals, including F&SF and Asimov’s.

Her short fiction has appeared in Analog and Galaxy’s Edge. For more about her work, including her novels, short stories, and her Elgin-nominated poetry collection, The Gates of Never, please see www.edda-earth.com. 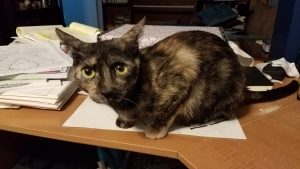