Katelyn’s hands shook, making the image through her scope jump and blur. She gave up trying to look. It couldn’t be what it looked like. Well, maybe it could be. This planet hadn’t had a full astrobiology research team here before. She was the first human to set eyes on these animals. But still… no, it couldn’t be.

She’d been so determined not to harbor any preconceived notions about what alien life should look like. She’s wanted to be open to the most bizarre, the most alien beings possible, so she didn’t miss anything, that she’d been taken completely off guard by the so familiar, yet so impossible sight.

Before her lay a green field with a stream running off to the eastern edge, the alien had been standing with its back to her. It looked an awful lot like the hind end of a horse except for the silvery, sparkly tail that shimmered so brightly it almost hurt to look at. Then the creature had lifted its head, with its matching shiny mane, and… the horn. The single golden horn. How seriously would her report be taken if one of the first alien creatures she described was a perfect textbook fairy tale unicorn? She wasn’t sure she could bring herself to do it.

She laid her scope aside and pulled her camera out of its case. It had a tripod, so she wouldn’t need to worry about her shaking hands. She looked up to make sure the alien was still there. It had its head back down, returned to its grazing, but was still there.

“Report in, Number Four,” her radio buzzed. She snatched it up before Jose could ask again.

“Number Four. Subject under observation. Request minimal radio noise until all clear,” she whispered, and then held a hand over the speaker to muffle Jose’s response when it came.

The unicorn was still eating peacefully, apparently undisturbed by the noise. She let out a breath she hadn’t known she was holding.

She snapped photos and made notes, creeping ever closer. The creature began moving away over a gentle hill in the lush pasture, and she followed. On the other side, the alien met up with a half dozen more just like it. The small herd greeted the newcomer, rearing up, and vocalizing with a sound like tinkling bells. They were so beautiful. Despite the cloudless sunny day, a rainbow formed in the sky behind them. This was totally insane. How was she possibly going to explain this to anyone? Katelyn wasn’t sure how long she stood there, tears welling up in her eyes, but she was proud of herself to at last remember to lift her camera and get some pictures before the rainbow faded.

As she took her photos, one of the aliens, she thought it was the original one she’d followed, turned to look at her. She realized then that she was standing out in the open, at the top of a hill no less. She squatted down, but knew it was too little, too late. But the creature didn’t flee. It approached. As it started back up the slope directly toward her, she stood back up. It paused, tilting its head to look at her with one eye, the sun glinting off its radiant horn. What could it be made of to shine like that? It didn’t look like bone, and it was so sharp!

She found herself walking slowly down the hillside until she and the unicorn were face to face. It gave a small tinkling whinny to her. She let out a laugh, her tears now flowing freely. It was like a dream.

The alien cocked it head at the radio hanging from Katelyn’s belt. The other members of the herd had taken notice of her now, and were coming to join them.

Her most ambitions daydreams about what she might discover doing astrobiology fieldwork didn’t involve anything as breathtaking as these unicorns. She was totally consumed with the magnificent creature in front of her. She held out a tentative hand.

An alien behind her nuzzled at the radio, knocking it from her belt and onto the grass, and silenced it with a hoof as it stepped around her. Katelyn didn’t notice. She thought the unicorn in front of her was going to put its nose against her hand, but instead, as its head neared, it gave her a gentle lick with its warm pink tongue. It was the happiest moment of her life.

“We found their equipment,” Jose said to the stern faced, grey haired woman on the small monitor in front of him.

“And…?” She shared his red eyes and tired voice. The whole project team was in mourning.

“All the same story. What they recorded in their notes and what they recorded on film are completely different. They all seem to have been attacked by the same type of small, pack hunting aliens. Really vulgar, vicious things. But their logs all describe other things: mermaids, unicorns, hobbits, and one – a miniature giraffe.”

“That’s what we think. We aren’t yet sure what caused it though. We scavenged a few… remains.” He looked involuntarily toward the ship’s deep freeze where biological specimens were stored. “Hopefully they’ll give you more information when they can be examined.”

“That doesn’t sound too hopeful. What sorts of remains?”

“Bones mostly. Some bits we aren’t too sure about. But Katelyn’s –” his voice faded, and he had to clear his throat to continue, “skull was found intact.”

“Oh. Umm, good, then.” The woman looked away. “Well, after you set the warning beacons and get on your way, I’ll look forward to seeing you home again. Be safe.”

Originally published in Cover of Darkness 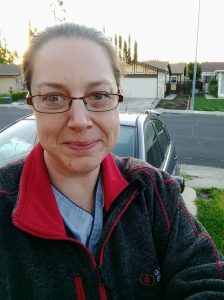 Kara has worked with animals all her adult life, from wild animal training at a theme park to volunteering with wildlife rehabs, farm animal sanctuaries, and the local SPCA. She currently works as a Registered Veterinary Technician in Northern California.

Like many writers, it was her love of reading that gave her the impulse to start to write. Science-fiction and fantasy were always the most fun for both.

During the pandemic, she is attempting to grow a garden and learning to play D&D with her family. Both are coming along with mixed results.

She blogs on many subjects at https://karahartz.com/ and can be found on Twitter @karabu74.

1 thought on “Eye of the Beholder”