Our drakopegasus rarely bites. And almost never in anger.

She tries to breathe fire, but struggles when she’s high. Thin air up there.

It’s difficult to always know what she wants, while she seems to understand me just fine. I was always simple, resistant to change, predictable. She, however, is complex, a myriad of feelings, notions as wide as the sea.

Her lineage includes destroyers of kingdoms, hoarders of treasures, and yes, a few swallowers of men.

I don’t know where I came from, and Perseus won’t tell me. I’d like to think heroic steeds. Maybe even Unicorns.

Legends describe her mother as a monstrous beast as big as a ship. Granted, she could stop a ship dead, had she the impetus. She was lovely. Slender features, waving mane, the long split tail.

She would never have eaten the princess.

“Perseus,” I said sternly, “free the damsel, while I deal with this… creature.”

I had never asked him for anything. Until later that day.

“I beg you, friend, tell the king and queen their ‘sea-bitch’ is dead.”

For at sunrise, I stood between her and the humans. Her form crested the waves, and her flowing mane whipped up sea foam against the sun.

Times past, I had known mares, phoenixes, a sphynx, once… only Kētos saw me immediately.

“Your hair tells me you’re not of the ocean,” I said, feigning boldness. “And your tail is not of the land.”

She spread dark wings and lifted out of the sea. Golden stars dripped from her body. She floated without a quake, steady as a thundercloud.

We belong to the air.

“Let me give you some advice, old friend,” said Perseus one day. “When you find your better half, you don’t know immediately. It takes time, it grows gently, like a tree. But it lasts. The love between my lady and I was forbidden. Forbidden… but inevitable.”

“But you see,” I said, forlorn and laid flat, “I felt fated to her the very moment she spoke. Malaka! Surely I misheard the fates.”

And looking into his eyes I said, “She knew me, Perseus. More than even you ever could.”

“Then it is done,” spoke the Queen, Andromeda. “Go to her, Pegasus. The sea beats the rock senseless, but a wave turns with ease.”

Wise words, and she would know. For in the faces of the fates, she showed no fear, no quiver. She was a wave in the night, dark and naked against immovable rock. Her chains—seaweed. Bonds to be broken. Freedom deferred, though never lost.

And she loved Perseus, and all their days they defied the fates, with every kind word and caress. Every smile, every kiss. Zeus and Hera, envious upon Olympus.

Our little drakopegasus rarely bites. When she does, it is only in play.

We belong to the air.

She belongs to the stars.

And she reminds me of you. 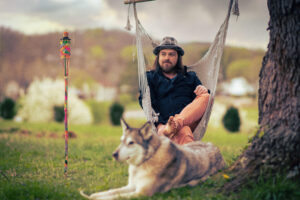 Jack Adam loves to imagine colorful worlds populated by relatable characters. Despite a degree in filmmaking, he often gets distracted by other creative endeavors, ranging from music to doodling. When he isn’t making art with his loving family, he prefers to be outside, where Nature breathes of the Divine, and a hammock swing works wonders for the soul.
Comments