I stepped into the bath. The stone floor sloped, a gentle helix, spiraling me into the steaming pool. Water beaded the cavern walls, as if the entire bathing cave were strung with pearls. Stepping through veils of steam, I spiraled deeper into the pool.

At the center, I was waist-deep. As water seeped into my pelt, I felt like a lodestone, water drawn to me like iron filings, turning my fur black and dragging at my edges. Sinking in, I found the sloping path with my fingertips and sat on its rim, water right up to my chin. Steam hung above the pool in gossamer sheets, so thick I could only see one pool beyond mine.

I closed my eyes and rested my head on the slick stone, letting the water creep between the hairs on the back of my neck. The smell of sulfur was thick in my throat, the smell of silver and geysers and fire in the belly of the earth.

I was hungry. I had been hungry for six days. Nothing made it go away. Mushroom steaks, lichen cakes, chicory coffee by the potful, even a fine filet of chanterelle. There wasn’t a delicacy in the entire cave city that would still my stomach. I kept catching myself daydreaming about his fingers.

Grettir has starfish fingers. I once told him so when we were out tickling amethyst anemones in the tidepools of the subterranean sea. He didn’t like it, but it’s true. He has heavy hands, fingers long and tapered, golden skin that’s always dry. Hairless. When I take his hands in mine, he flinches, tickled by the thick fur bristling round my fingerpads.

Cunning starfish fingers. Out at the tidepools, I used to collect specimens for him to sketch: a bucket brimming with ivory barnacles, indolent snails, indigo mussels, prickly limpets, spindly sea stars, and anemones balled up like angry fists. In his sketches: every spine and armored shell realized in hard charcoal. Every line, every shadow, every highlight alive. I have never seen Grettir throw away a sketch. He doesn’t throw away so much as a line. Every stroke is heavy with intention.

To distract myself, I dipped my face in the quicksilver water, watching the ripples melt lazily away as I shook sparklets from my eyelashes. Underwater, I ran my fingers down my arms, combing out the fur with my fingernails. Then I did my legs, my belly, my back. It felt good to get my fingers in my fur, combing through the knots. Sometimes it feels like I’m a sack of skin stitched too tight to my bones. Hot water and a good combing can loosen the seams.

I rubbed my back against the stone for a good scratch and felt my fur catch. When I cursed and wrenched away, I felt several hairs ripping from my skin. With my fingers, I traced back over the place and found a spine rippling the smooth stone. A fossil. A helix of lithified bone. Ammonite.

All he’s been sketching lately: spiraling shells locked in stone. Not uncommon in the cave city—most families have a fossil or two protruding from the stone walls of their parlors. Often framed, pressed under a pane, long-dead cephalopods in glass coffins. But Grettir likes the undomesticated specimens: ammonite on alley walls, or in the southern subcaverns still untouched by urban sprawl.

I watch his cunning fingers speak the specimens to life in charcoal and light. A language only he speaks—language of lines, loops, ellipses, sickle moons, sweet ratios—a symphony in black and white.

He gives his nub of charcoal to me so he can brush his hands clean and hold the picture up to the light. He angles it so the rays skating down a nearby sky-shaft skim softly over the page. It’s perfect. The ammonite on the page: alive in light and shadow. The ammonite on the wall: dead. Entombed in echoing stone. He holds the drawing out to me, fingers fanning off the page until he holds it between pinky and thumb.

“For you,” he says, his voice settling like dust on the cavern hush.

I pushed off the wall and stood up. Fed by springs boiling up through the earth’s veins, the pools never cooled, and I could already feel a film of sweat hot on my forehead. My stomach growled.

Angrily, I shook the water from my pelt, spinning so the spray pinwheeled out around me. I clamped my hands over my belly, crushing it silent, even as static electricity spooked the hairs around my fingerpads. The fur on my stomach stood up, dark spindles shivering in the steam.

“For you,” he says again, holding out the picture to me. “You’ve had a hard week.”

I look down at my left hand, the half-healed crescent where my sister bit down to the bone. Six days tender. Red ridges wrinkling my fur. It’s hard looking after her, half-grown but all wild, nothing like I was at that age. As if the bear in our blood weren’t thinned with human, as if our forebear bore her, not our six-generations-great grandmother.

My sister, with her white pelt and our father’s blue-black eyes. All I want is to gather her up in my arms and tell her sister-secrets. But whenever I try, she shakes me off and paces the edges of the parlor. She hasn’t been allowed out since the biting.

“Trade you,” Grettir says, nodding at the nub of charcoal sticking out of my right hand. He holds the drawing out so that they almost touch, the charcoal and his index finger. That cunning finger, long and tapered, skin thin and golden, blue veins pale and fine as candyfloss beneath the surface.

I bow my head over our hands—his extended finger, the charcoal stick, thick and crisp—as if for a kiss.

I can’t help myself.

I take a bite. 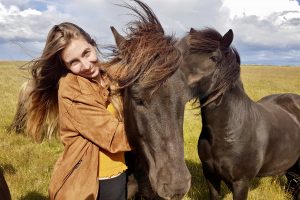 Lucia Iglesias holds a B.A. from Brown University and is pursuing her MFA in Fiction at the University of Kansas. Home is Oakland or Iceland, depending on the time of year, and she is a friend of cats everywhere. Her work has appeared in The Rumpus, Shimmer, Liquid Imagination, Cosmic Roots and Eldritch Shores, The Bronzeville Bee, and other publications.