The first time I meet Charley Coavins, I’m sitting on a lichen-licked speck of rock, way up on the sunny hillside of an old mountain I don’t know by name. She’s leading her father’s unruly flock of sheep home for the night. She has a shepherd’s crook in one hand and a smoke-grey kitten squirming around the other, climbing up the sleeve of her dirndl on curious claws, exploring the paisley kerchief ties at the back of her neck.

A kestrel flies above her, gliding in a sea of blue sky.

“Hey, shepherd-girl!” I call out in a moment of impulsive fancy, too idle for my own good.

Charley doesn’t answer me right away. At my voice, one of her little lambs tries to bolt. She has to stretch out her crook, corralling it back.

“Come now,” she coos calmly, taking her wandering lamb by the scruff of its curly white wool, leading the little thing back to its mother. “That’s a good girl. Stay, stay.”

The rest of the flock are better behaved—for skittish, wooly-brained grazers, anyway. But she could really use a sheepdog to keep them in line.

The flock stops when Charley stops, content to nibble at pink clover and bromegrass, purple vetch and buttercup. Charley holds her crook under her arm while she brushes the palms of her hand free of burrs and stickers collected from lamb’s wool. She retrieves the little kitten from where it’s playing on her shoulder, setting it down beside daisies and bellflowers, before trudging the short distance across the hillside to me.

“What is it?” she wonders, impatiently.

I’m a stranger here. And stranger than most by half. She must know it. But her expression isn’t so much wary at my presence here, as world-weary. As if she knows my kind and has had enough of us. Imagine!

“Do you know who you’re talking to shepherd-girl?” I ask, giving her a winsome grin, in that self-satisfied way I’ve perfected over centuries.

“You’re a god, I’m sure,” she replies, with a sigh. “Only gods live on this mountain. As for which one, I could spend all day guessing, but I don’t have time for that sort of thing. So just tell me.”

I purse my lips. This girl is brazenly cheeky. I could smite her with a snap of my fingers. Well, not me, personally. But I have friends who could do it. I consider summoning one of them but decide against it.

She’s just a shepherd-girl, after all. Nothing I can’t handle.

“I’m one of the Folk,” I answer, still grinning, proud of my heritage, as my race tends to be. “Lysa Greenflower from Kingfisher Falls. So not quite a god.”

“Folk or god,” Charley shrugs. “It’s all the same. Tricks and games.”

“How many gods have you met?” I ask, my grin faltering slightly in annoyance. Why isn’t she overcome with awe? Why isn’t she bartering for favors?

“Two,” she says, simply, giving sparse details. “A child with grey hair and a man who thought he could fly.”

She knows a third god too, but she fails to mention this. I fail to question her count. Her sheep begin to wander again, and she tightens her grip on the crook, demanding, “What do you want, Lysa Greenflower?”

“I’m not sure,” I mutter honestly, unhappy with the direction of this conversation. She’s asking me questions now. That’s not the way these things usually go. I look around quickly, raising my chin on another impulsive choice: “Give me one of your little lambs.”

Charley Coavins looks me over, from the top of my raven-black head to the scuffed soles of my white boots. It’s a critical glance that says she’s not all that impressed.

“You dare to deny me?” I ask, my amusement quickly turning to something else. Something that darkens the skies above us, sending that kestrel flapping his wings against violent gusts. Somber thunder echoes up the mountain.

She gives the stormy sky notice, but remains firm. “They don’t belong to you, and I’m busy. Go find someone else to play games with.”

“I’ll play games with whoever I want!” I insist, jumping to my feet. She’ll know it soon enough. Horrid girl. Games are supposed to be fun. And I only play pleasant games with mortals who don’t vex me. This one certainly needs to be taught a lesson in the very real power of—

I don’t know how it happens but suddenly, I have white, furry feet. Four of them. A wagging tail, a long snout and a shaggy, raven-colored coat. The storm breaks apart too quickly, as my anger vanishes, replaced by confusion. Why am I now panting, leaping down from my rock perch and bounding towards that awful girl with a loping gait that says I’m happy to see her?

Am I happy to see her?

Now she smiles, bending down to let me lick her face.

“There’s a good girl, Lysa,” she scratches my chin and neck and I… like it. I find myself excited, tongue lolling out, compelled to be this girl’s best friend. She scratches behind my ears before pushing me away with a gentle nudge. “Now round them up for me. Father expects us home before nightfall.”

I don’t think twice. I do whatever she tells me, happy to help. What is this terrible magic? And what kind of mortal could possibly…

The kestrel in the sky spirals down to land on his mistress’s forearm. She scratches his chin too, of feathers not fur, pulling a tin of insects out of her apron pocket so he can nibble away at grasshoppers and dragonflies. At her feet, the smoke-grey kitten rolls onto its back, batting at white-petaled daisy heads.

Only gods live on this mountain, she’d said.

And a shepherd-girl, whose father is a hermit god, apparently, giving his daughter the power to turn trespassers on his mountain into animal friends. The kestrel says I should have known this. The kitten says not to blame myself; we all fall for the same old tricks.
Oh, but Charley’s too generous with all these belly rubs and ear scratches. There are times—too many lately, herding the flocks up on sun-bathed hills, my fur fluttering in mountain air, dozing at her father’s feet, by cheery fires at the end of long days—when I almost don’t regret any of it. 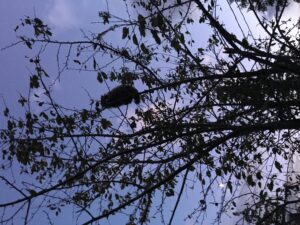 Gretchen Tessmer is a writer based in the U.S./Canadian borderlands. She writes both short fiction and poetry, with work appearing in Nature, Daily Science Fiction, Strange Horizons, and The Magazine of Fantasy and Science Fiction, among other venues. She lives in the woods, with two energetic dogs, some chickens, a couple ducks and a tortoiseshell cat who won’t leave the blue jays alone. Plus about a thousand raccoons. Seriously, she’s overrun. Like Parks & Rec style.