A mouse was very sleepy. He could not sleep for thinking of the cat who prowled outside the hole in the baseboard. Sometimes the cat poked in a paw, lying on his shoulder to curl his claws upward in a playful way that made the mouse’s heart shudder. Sometimes he went away. He could be gone for hours. Those times were the worst, because the mouse never knew when he would return. He preferred the certainty that the cat was out there, with his fangs, pacing and watching the hole.

His mother didn’t understand. “There are plenty of other openings in this apartment building,” she told him. “Passages, portals, doors, holes. Why sit by the one where the cat is sure to come?”

The mouse could not explain.

“Mrs. Santana in 6B is having her poker night,” his mother offered. “She never vacuums after. She’s got no cat. Why don’t we go there together once it gets quiets and she turns on the TV?”

But the mouse didn’t want to go with his mother.

“I’ll bring you back a crumb of Ruffles,” she said sadly.

The mouse’s brother thought he understood.

“I like it too,” he confessed. “The risk. Makes you feel alive.”

The mouse nodded sleepily. His brother crouched beside him, nose working, ears up. They heard the heavy, unmistakable thud of the cat landing on the computer desk, where it liked to take the sun. The brother waited, eyes gleaming, then darted out in a crazy slurry of legs and tail. He slalomed under table legs, turned a corner, and streaked back across the rug. The cat’s head moved. Its gaze fixed on its prey, hind legs bunched…

It leapt and slid, punching its great paw into the wall, missing by a hair the mouse’s brother, who skated to a stop, panting hard. The mouse watched in paralyzed horror as the cat groped in their darkness for long moments, then finally withdrew.

“Gets your blood flowing, I’ll tell you.”  His brother grinned.

The mouse could only nod as his brother preened himself. Moments later his brother grew restless and whisked off.

Outside the hole the cat was waiting. The mouse waited too.

Finally the cat moved. It plopped over on its side, stretching in a nonchalant way against the baseboard, as though it had decided, for no particular reason, to relax there. Its body blocked the light. The mouse could hear the rasp of its tongue as it licked its paw, the deep rumble of its purr. He all but held his breath. After a time the purring faded as the cat slipped into sleep.

Slowly, slowly the mouse crept closer, until he could press his body against the warm body of the feline, and close his eyes. 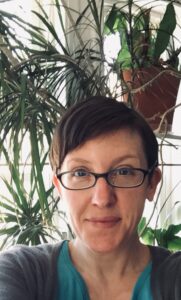 Gabriel Robinson was raised in West Virginia by hippies and Siamese cats. She studied history of religions at Bard College and University of Chicago, and has worked as a waitress, adjunct professor, used book dealer’s assistant, academic editor, art supply store clerk, documentary film researcher, and contest judge. She lives in Cambridge, MA with her partner, Gavin, and Otto, who appears to be a seven-year-old human child but is actually a trans-dimensional robot from the planet Janet.