Buddy Jumphigh, curator of bibelots and baubles at the Third Smithsonian Institute, sighed and jammed his pince-nez onto his snout. There was no point in continuing to sniff the breezes wafting past his open window; no point in melancholic reminisces of times past when the Mall thronged with people; no point in whining, as he longed to do:  he could not avoid cataloging the horrifying object before him any longer.

In a slow, cramped, scholarly hand, he printed the item acquisition number at the top of the form, along with a brief descriptor: “mechanical hummingbird with gems.”

Buddy measured the bird and then consulted several reference books, trying not to tear the fragile, ancient pages. Still, one yellow corner crumbled into pieces that scented the air with the nostalgic smell of mildew, decay, and rags.

He brushed the scraps away. He entered a description into the box on the form and then leaned over to sniff and lick the hummingbird. He continued his exam, entering each detail on the form until it was completely filled out:

Life-size replica (to the eye but not to the other senses) of a male Calliope hummingbird (Stellula calliope) covered in amethysts, peridots, opals, and crystals, with obsidian eyes and cast-brass beak and legs

Sound: whirred as it tried to activate

Condition: good: a few gems are missing, and beak is bent

Components: The mechanical parts and three lasers within this item make it surprisingly heavy for its small size, about nine ounces. Of the estimated one hundred thousand produced, only nine are known to be extant, of which this one is in the best condition. Collected by an exoarchaeologist in the rubble of Chicago.

The remaining gems are 92 small baguette-cut amethysts on the chest, 998 tiny uncut peridots on the head, back, and wings, and 901 opal cabochons on the underparts, all lab-made and of low (excelsior-5) quality; 2 fine (excelsior-15) quality natural obsidian cabochons serve as eyes; and 27 superior (excelsior-25) quality natural rock crystals of perfect clarity highlight the eyes and are interspersed among the opals.

Sighing, Buddy dropped the marker from his cramped paw and shook the uncomfortable pince-nez from his muzzle. Now the terrible thing would go on display with the other great prizes of the Smithsonian’s collections. He gave it one last look and barked at it. “Bad bird! Bad bird! Bad bird!”

He himself would never look at the bird after it went on display. He hated it with a fervor:  fewer than one hundred thousand of the alien weapons had drive the humans to extinction.

As curator of bibelots and baubles, he had access to records forbidden to the general public. His ancestors had played along with the aliens for generations after they’d eliminated humanity, receiving genetic enhancements with sloppy grins and happy tail wags, biding their time and allying with their ancient feline archenemies, who slunk in the shadows and ate rats and cockroaches.

Then, in the largest, bloodiest revolution in Earth’s history, the two species rose up and enacted retribution.

Once the aliens were dead and eaten, his people reconstructed human society, with themselves in human roles. Their cat allies reclaimed their traditional places before fires and in sunny windows. All was well again.

Except that his people were dying out.

The public knew nothing about the slow, but relentless, decline in population. Several generations of Smithsonian scientists had worked out the cause. No cure would ever be possible:  his people were a symbiotic species lacking its symbiote.

They were dying of grief.

A howl overtook him, and then another, and another.

Throughout the crumbling building, other curators and staff joined in, their calls of anguish for their lost companions and guardians echoing against stone walls and leaking out cracked windows into the humid night air of the Mall. 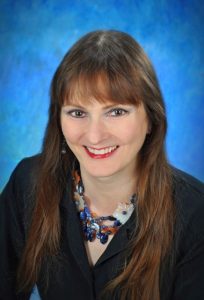 Shauna Roberts is an award-winning author of both fiction and nonfiction. She writes in several genres. Her novels are Like Mayflies in a Stream (historical fiction), Claimed by the Enemy (historical fiction), Ice Magic, Fire Magic (fantasy), and Log Cabin: Erikka (romance, to come in 2019). In addition, she has published more than a thousand nonfiction articles, three nonfiction books, and several short stories and novellas. Roberts is a graduate of the Clarion Science Fiction and Fantasy Writers’ Workshop. In her spare time, she enjoys reading, quilting, embroidery, growing herbs and roses, and playing in early music ensembles. She has lived all over the United States, along with two stints in Bordeaux, France, and now resides with her husband and two cats in the Blue Ridge Mountains. To sign up for her newsletter, click here.

2 thoughts on “Bibelots and Baubles”